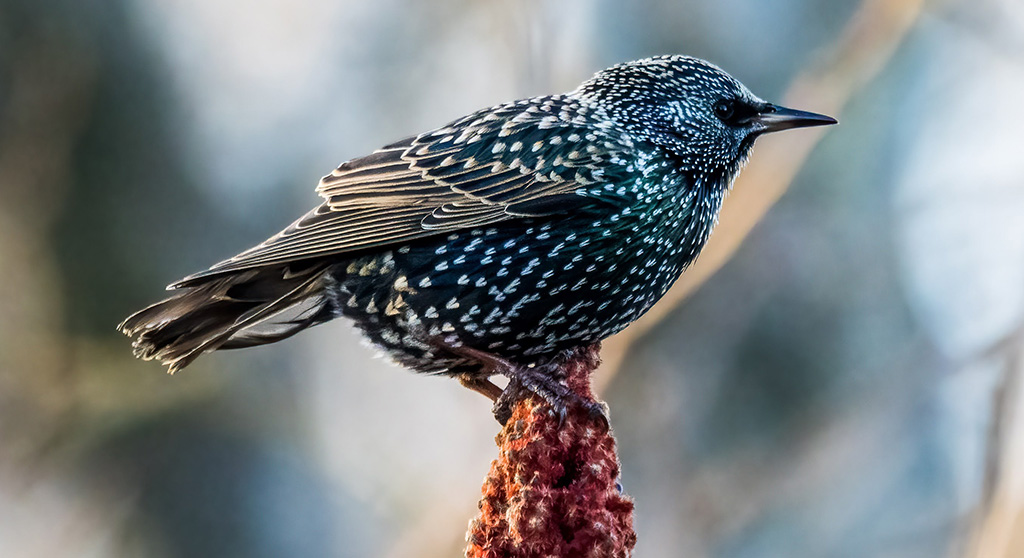 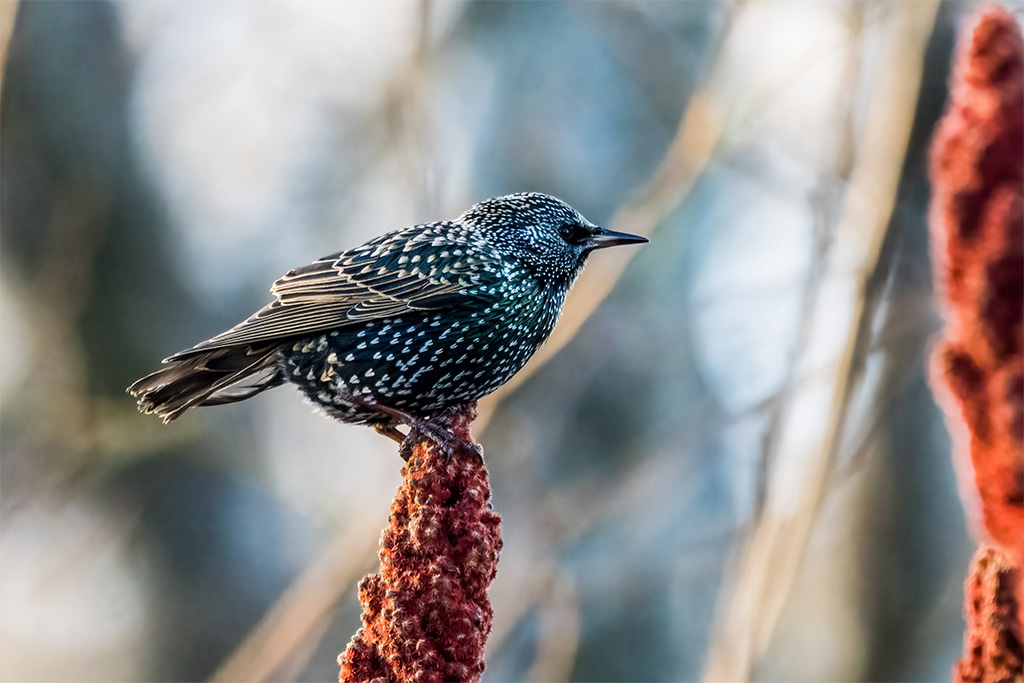 People have done some bizarre things in this world, but one of the stranger was reportedly taken by a German immigrant and drug manufacturer named Eugene Schieffelin, said to be an eccentric Anglophile and Shakespeare buff. He was the chair of the American Acclimatization Society, whose purpose was to introduce foreign plants and animals to North America to improve the environment. According to lore, Schieffelin decided to introduce into North America as many as possible of the 60 birds referred to in Shakespeare. He began this task in Massachusetts, releasing European starlings (Sturnus vulgaris) in Worcester in 1884 and in Springfield in 1897. But these birds were reportedly all gone within four years.

Schieffelin had one great success, though: On a cold and snowy March day in 1890, he released 40 pairs of European starlings into New York’s Central Park. At first, Schieffelin’s starlings stayed in Manhattan. But they ate almost anything and were not intimidated by other birds, and they began to spread. In 1908, a starling was seen in Essex County, Massachusetts. By 1928, starlings had arrived in Mississippi. By 1942, starlings made California their home. Soon starlings had adapted to North American climates from Alaska to Florida. Today, it is often said that those 80 birds and 80 more Schieffelin introduced the following year have become millions of U.S. starlings, and that all descend from these Central Park birds.

But is this story factual? Do we have Schieffelin alone to blame for the introduction of starlings into North America? Probably not, according to Lauren Fugate and John MacNeill Miller in the journal Environmental Humanities, published by Duke University Press. As much as these details make a good story, according to the authors, there is no mention of Schieffelin’s interest in Shakespeare until 1948 – or 42 years after Schieffelin died. It’s true that Shakespeare clubs were popular in the early 1900s, and they did sometimes plant gardens of plants associated with Shakespeare, but there is no indication Schieffelin was a member of such a club.

Schieffelin did indeed release starlings in America, but so did other people and acclimatization societies around the United States, including the Acclimatization Society of Cincinnati, which released about 4,000 birds, including starlings, from 1872 to 1874. 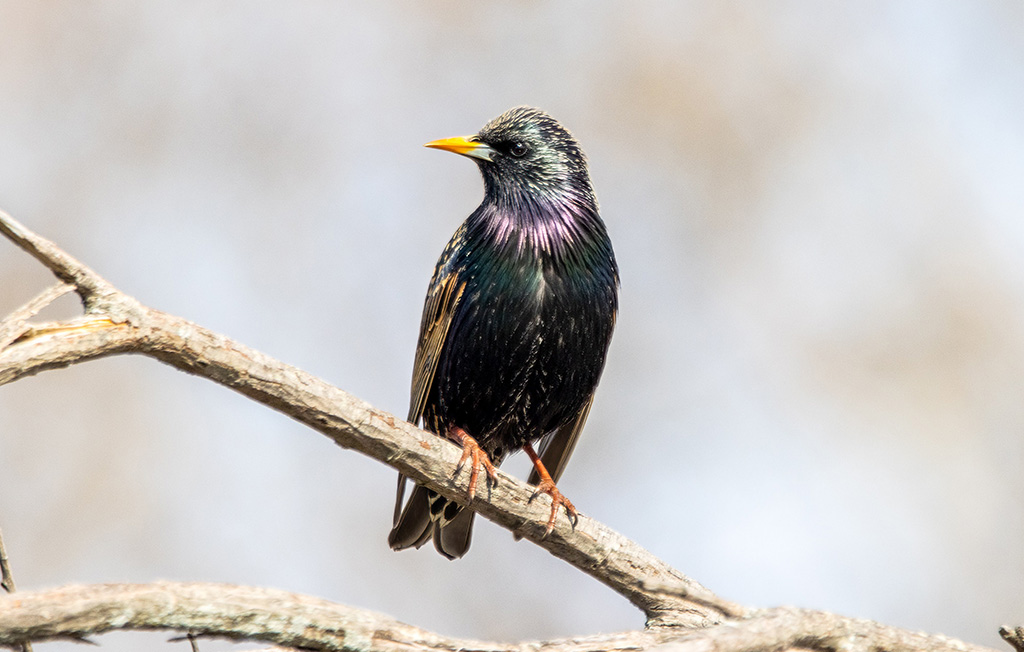 By the time breeding begins, feathers on a starling such as this one seen in March have become an iridescent black that reflects purple and green light. (Photo: Richard George)

Acclimatization societies were organizations (made up largely of men of European descent) around the globe that wanted to force living things from one country to adapt to and breed in the climate conditions of another. Over time, the purpose of these societies changed, and in the United States the focus was on “improving” the local environment. According to George Bennett, of the Acclimatization Society of Victoria in Australia, “When carried out successfully, [acclimatization] will impart life and beauty to our plains and forests, where at present animals are scarce, and it will fill our lakes and rivers with beautiful objects of nature.”

Do all North American starlings descend from Schieffelin’s released birds? Again, probably not. There is not a great deal of genetic diversity in North American starlings, but this does not necessarily indicate they all came from Schieffelin’s releases in Central Park or elsewhere. Starlings, like many birds in the 1800s, were imported from Europe to be sold as caged birds. Some probably escaped or were released. In addition, other people and acclimatization societies released starlings in America. 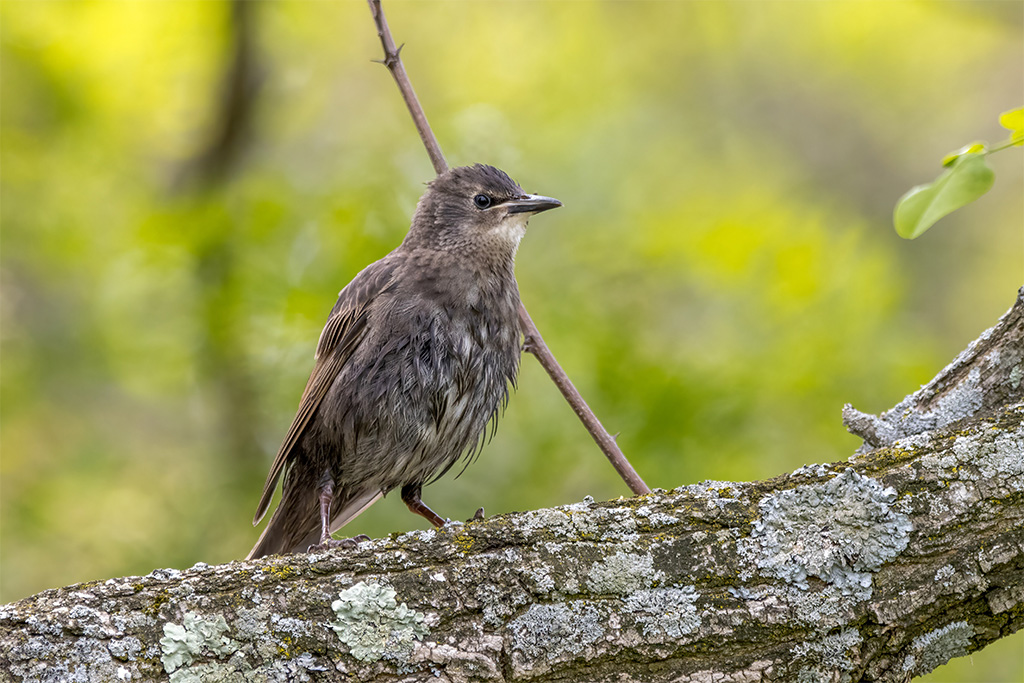 Juvenile starlings such as this one seen in May are a dull brown. (Photo: Richard George)

Most U.S. birds have laws protecting them, but starlings do not. Over the years, officials in the United States have spent millions of dollars trying to eradicate “nuisance” starlings. They have tried using everything from balloons to artificial owls, from itching powder to mechanical hawks, from Roman candles to live wires, from speakers blasting starling alarm calls to irradiating starlings with cobalt-60. They have even promoted starlings as game birds. In the 1960s, the federal government used poisoned pellets to kill thousands of starlings in Nevada. From 1964 to 1967, some 9 million starlings were poisoned in California to protect feedlots.

But are starlings really a nuisance? It probably depends on whom you ask. The U.S. Department of Agriculture in 1915 launched a study to understand the effects of starlings on farms. Much to everyone’s surprise, the study concluded that starlings were helpful to farmers, destroying more insect pests while eating fewer crops than native birds. Today, however, starlings steal feed pellets from feedlots, called Concentrated Animal Feeding Operations, of factory farms. Agribusiness is an enemy of the starling. 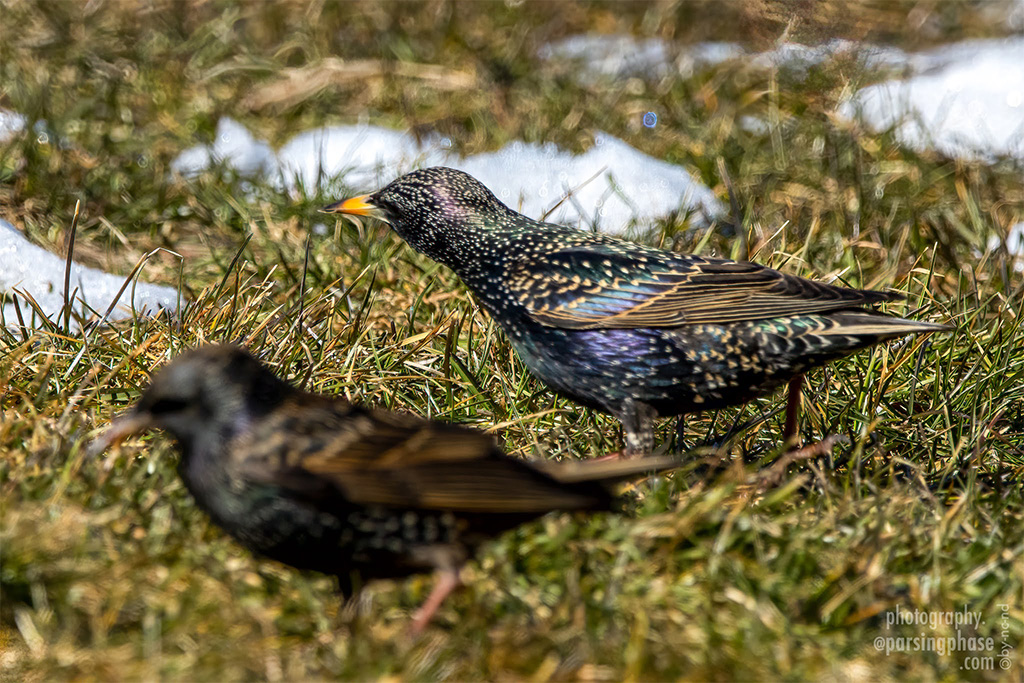 Starlings have yellow bills during the breeding season and grayish bills at other times of the year. (Photo: Richard George)

To help reduce the number of starlings, in the 1960s the USDA helped to develop a slow-acting poison called Starlicide, or DRC-1339, and began a program nicknamed “Bye Bye Blackbird” that continues to this day. In 2009, the agency estimated that the program killed 4 million birds, including red-winged blackbirds, starlings, grackles and cowbirds. When in 2016 starlings started falling from the sky in Western Massachusetts, it turned out that the USDA was poisoning these birds without informing the locals. Some scientists think that these bird deaths are underreported, and that the project could be quickening nationwide declines in bird populations. In addition to the birds killed by the USDA, countless more are killed by private contractors who are not required to keep count of bird deaths.

The starling population in North America is half the size it was only 50 years ago. There are 85.1 million breeding birds today, compared with 166.2 million in 1970. Starlings are also decreasing in their native range in Europe; in Great Britain they are now given the highest conservation priority, because the species is globally threatened. 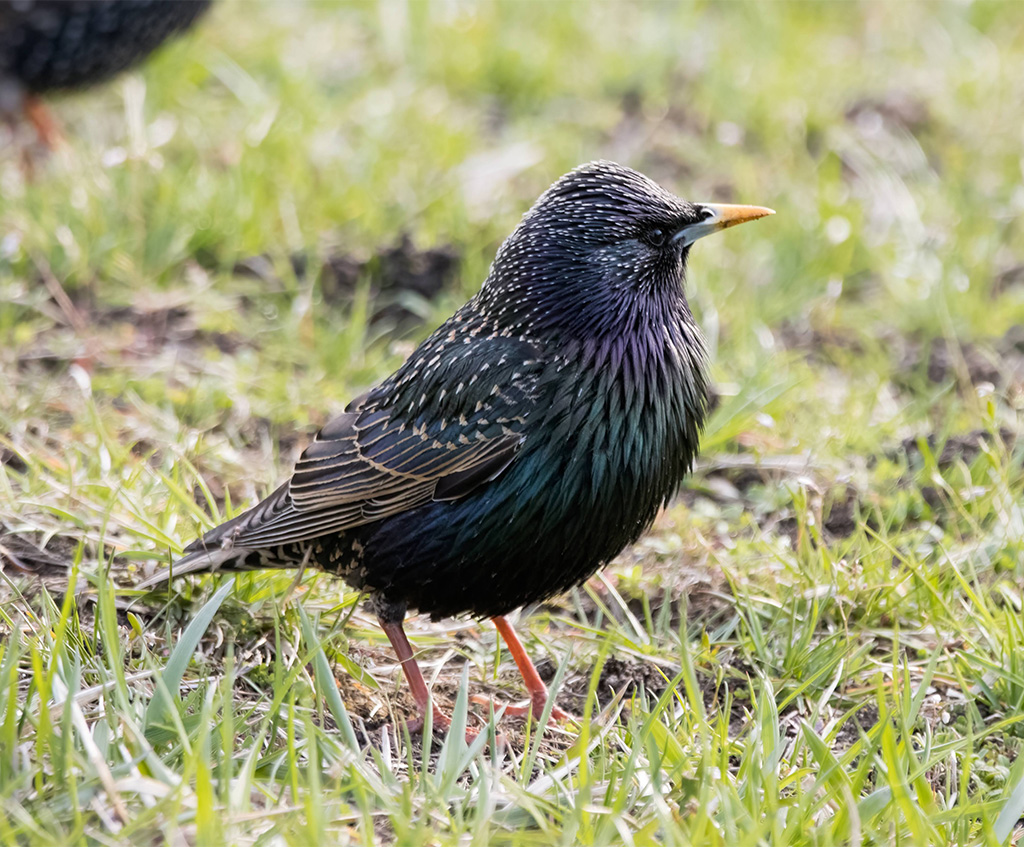 A starling forages for insects in a grassy area of Huron Village. Starlings are about 8 inches in length from beak to tail. (Photo: Richard George)

Starlings nest in holes, which keep them safe from predators. They are strong, dense birds who outcompete other cavity-nesters, such as native woodpeckers, martins and bluebirds. But there is no strong evidence from analyses of Christmas Bird Counts and Breeding Bird Surveys of declines in native bird populations because of the introduction of starlings.

Starlings eat almost anything, but they prefer insects when they are available. Flocks of starlings forage in fields or lawns, poking their bill into the ground to search for insects. Starlings also eat fruit and grains, seeds and garbage.

Sometimes a large flock of starlings, called a murmuration, flies in swirling patterns across the sky. These aerial acrobatics are usually caused by a predator, such as a falcon, near the edge of the flock. All the starlings in a murmuration change direction in sequence, paying attention to its seven closest neighbors to coordinate the movement. 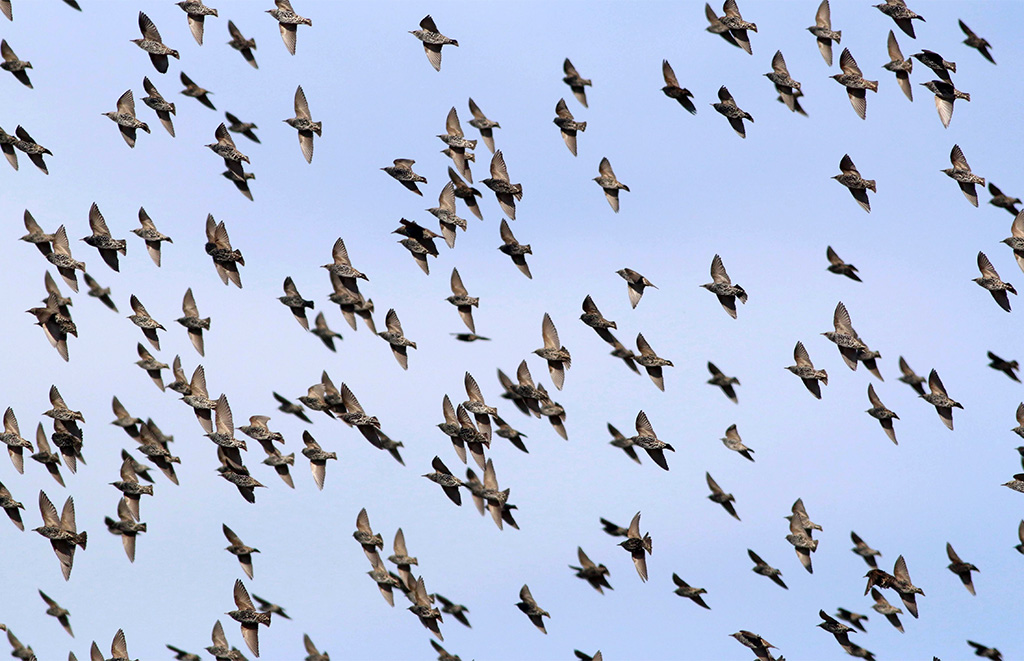