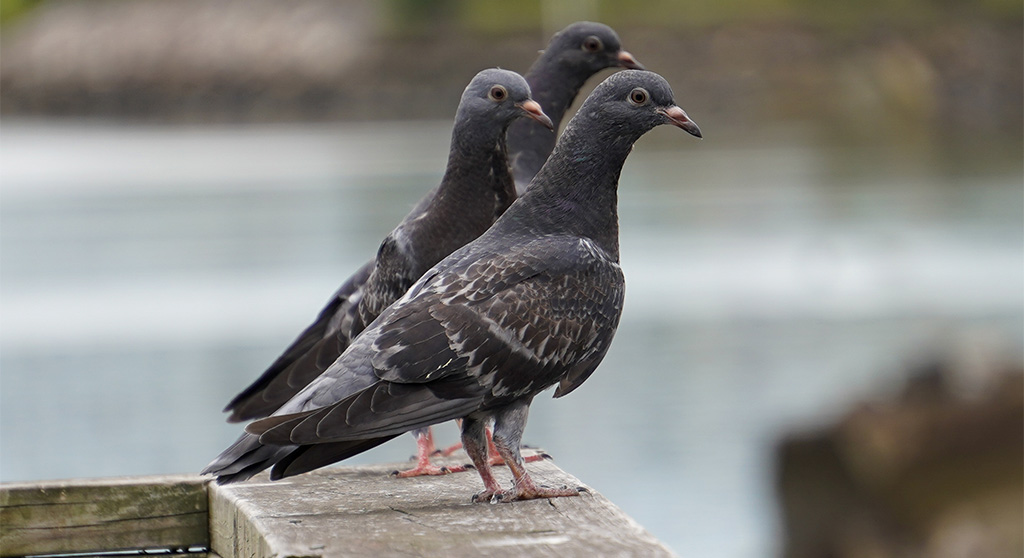 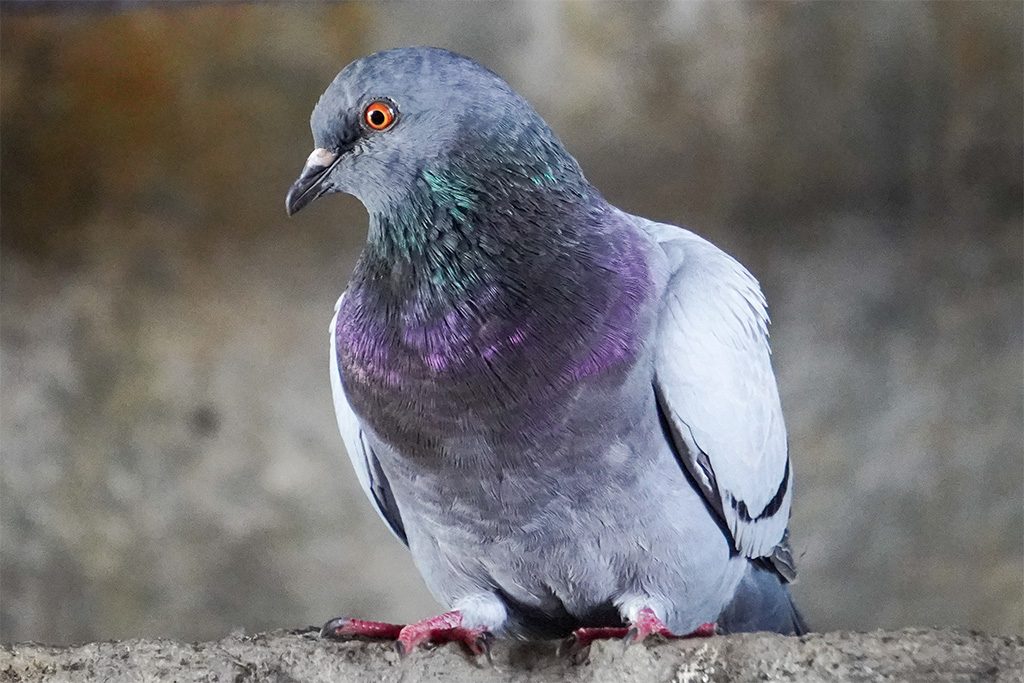 Adult pigeons usually have red eyes. These birds have excellent vision and can even see ultraviolet light. (Photo: Jeanine Farley)

Did you know that the common pigeons we see in Cambridge and Boston, called rock pigeons, were one of the earliest animals to be domesticated? Egyptian hieroglyphics from 5,000 years ago show domesticated Columba livia domestica, but we know they were also domesticated at least 10,000 years ago in Mesopotamia (modern-day Iraq and parts of Kuwait, Turkey, Syria and Iran). People spread these domesticated birds around the globe so much that today it is not clear where wild rock pigeons originated.

Pigeons are fantastic flyers. They can travel more than 500 miles in one day, and they have been clocked at 94 miles per hour. They have a unique homing instinct. For these reasons, people have used them for racing and as homing pigeons and message carriers. If ancient Mediterranean sailors got lost at sea, they would release a pigeon to point themselves back toward land, while people in ancient Rome sent pigeons between cities to announce winners of the Olympic games and to broadcast the results of chariot races. Genghis Khan used a system of pigeon relays from Asia to Europe to keep up to date on what was happening across his vast empire.

More mundanely, thousands of years ago in North Africa people raised pigeons both for food and to make fertilizer from their droppings. In medieval England, pigeon droppings were used to make gunpowder.

In medieval times in England, the lord of a manor, when leasing farms to tenants, reserved the right to let his pigeons forage over them. . . . The destruction of crops by the pigeons caused serious losses to the farmers and a great deal of trouble between them and their landlords.

Pigeon manure is very rich in niter, which the government had difficulty in procuring for the manufacture of gunpowder; so it regulated the construction of pigeon houses and appointed collectors to gather the pigeon manure. It was easier to do this when large flocks were kept by landlords than when an equal number of the birds were kept in small flocks by tenants.

American colonists brought domesticated rock pigeons to Plimoth and Jamestown in the early 1600s. These farm animals were raised for food. Throughout the 1600s, ships transported thousands of these birds to our shores. Beginning in the 1700s, people became interested in exotic pigeons, and fanciers started breeding new varieties. Even Charles Darwin crossbred fancy pigeons to study variation within a species.

Selective breeding has created many varieties of domestic pigeons, much like people have bred domestic dog and horse breeds. This explains why you might see some pigeons that are brown, white, gray or black. Most pigeons have the typical wild bird’s blue coloring, though – a blue-gray body, wings with two black bands, and an iridescent purple-and-green neck. 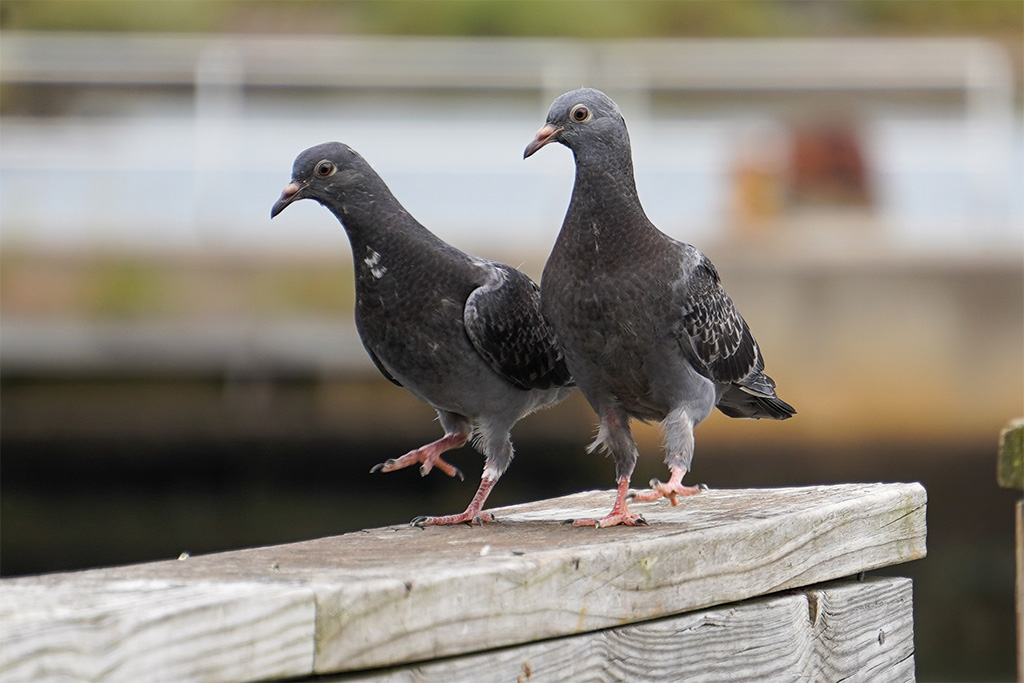 Juvenile pigeons look much like adults, but they are less iridescent. (Photo: Jeanine Farley)

Today, you can find wild rock pigeons only along the western coasts of Ireland and Scotland. All of the other rock pigeons in the world, including all those in North America, are feral birds that escaped or were released from domesticated stock. But because domesticated and feral pigeons have interbred with wild pigeons for thousands of years, a true wild-type pigeon may not even exist.

Wild rock pigeons nest on rocky cliffs or caves; the escaped feral birds enjoy building ledges, rafters and exposed beams in bridges and tunnels.(We do have a native pigeon in Massachusetts, the mourning dove, but that’s a conversation for another day.)

Scientists have studied the genetic differences between groups of pigeons in the Northeast. Their findings indicate that the pigeons living in the Boston-to-Providence urban corridor are genetically distinct from pigeons in the corridor between New York and Washington, D.C. Yet there is a great deal of green space in Connecticut between the two populations, and the pigeons do not travel over this area. A pigeon in New York might decide to travel down to Philadelphia, but it will not fly to Boston. And, by the same token, a pigeon in Boston might fly to Providence but will not fly to New York. 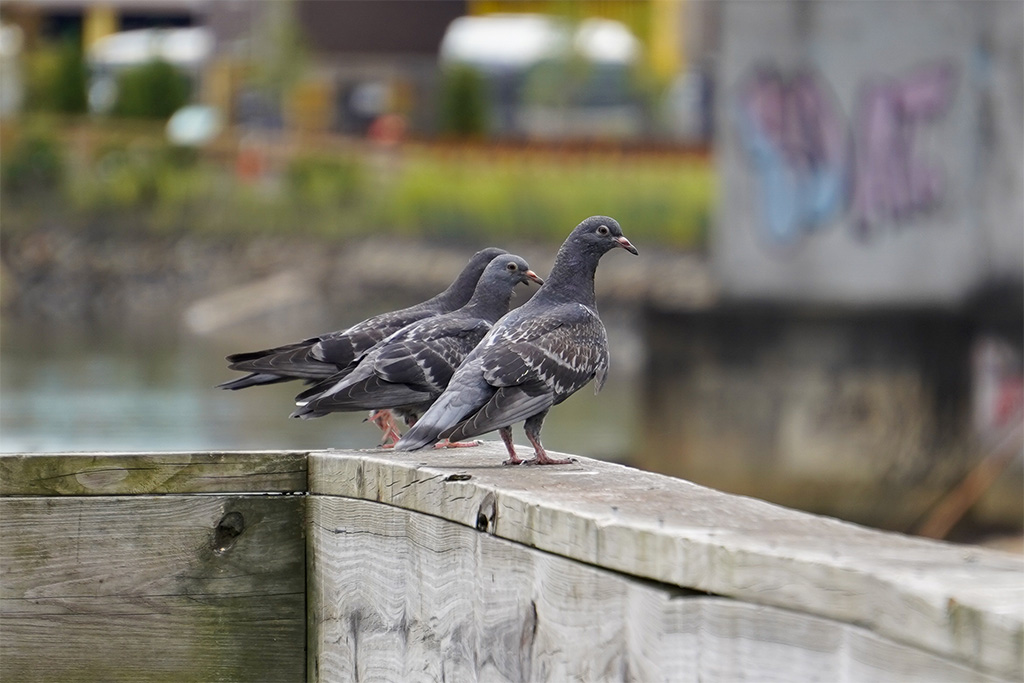 Our feral pigeons make a nest that they reuse many times. What begins in year one as a lightweight nest of straw, sticks and stems becomes over the years a heavy, potlike mound. Large nests can include nestling feces and sometimes unhatched eggs from previous years or even desiccated dead chicks.

Pigeons are monogamous and may mate for life. Females usually lay two eggs at a time. Both parents care for the young that hatch by regurgitating “pigeon milk,” a fat- and protein-rich substance made in the throat pouch, or crop, from nearly any food. Unlike other birds, pigeons do not have to rely on insects, worms and caterpillars to feed their young: Though they eat mostly seeds, their menu also includes berries or insects, as well as food spilled from bird feeders, handouts from people and food waste. (The need for water keeps many near lakes, rivers or city fountains.) This allows pigeons to breed year-round, raising up to 10 chicks annually. By six weeks, the youngsters are independent enough that the parents may start another brood.

I have noticed that there seem to be many fewer pigeon nesting sites than there were 20 years ago. This anecdotal observation is borne out by the Breeding Bird Atlas, which says the feral rock pigeon population in the United States has declined by 46 percent from 1966 to 2015. It is not known why pigeon populations have declined, but we can speculate on two factors: increasing numbers of predators such as hawks and municipal pigeon-control measures. The MBTA, for example, has installed spikes on its rafters to control pigeon populations, and people are discouraged from feeding the birds.

The Migratory Bird Treaty Act of 1918 protects native birds, but the act does not apply to feral pigeons, common starlings or house sparrows, because these birds are all introduced species.

Despite the fact that pigeon populations have declined in the United States, there are an estimated 400 million of them worldwide, and the numbers are increasing as urbanization continues. Pigeon populations appear to be in no danger.