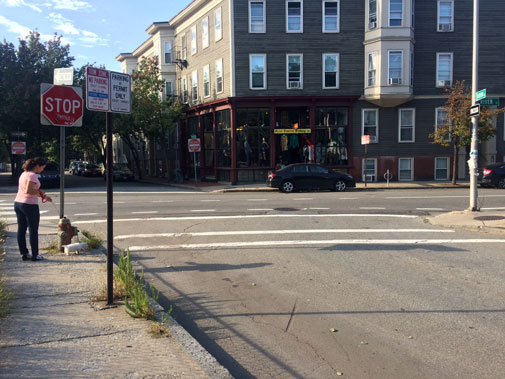 Auburn and River streets in the Riverside neighborhood near Central Square. The spot had been the scene of violence Sept. 5. (Photo: Marc Levy)

A Boston man has been arrested in connection with a nonfatal shooting that took place Sept 5. at Auburn and River streets, which means arrests have been made in both shooting incidents from early September; a suspect had already been found in a Sept. 10 incident.

Two young men in their 20s were injured in the Sept. 5 shooting – one in a knee, one in a hand – which police believes was targeted. Residents reported hearing between four and seven shots fired at 10:46 a.m. Sept. 5 near the intersection’s Enterprise Rent-a-Car location.

“Our officers and law enforcement partners conducted a thorough investigation to identify this suspect and have been relentless in their pursuit of him,” Police Commissioner Branville G. Bard said. “I am incredibly proud to report that all of the suspects wanted in the three separate shooting incidents on Sept. 5 and Sept. 10 have now all been identified and taken into custody.”

In the Sept. 10 incident in Riverside, just south of Central Square, six or seven young men were walking down River Street away from the square when a white SUV driving toward them slowed; someone inside took aim and began shooting at the group – getting off three or four shots as the men on foot fled down William Street, neighbors said. As the SUV continued north,  the men who ran from it apparently returned fire.

A suspect returned to the scene, in that case. Police took Lamaree Wallace, 20, of Washington Street, Boston, into custody to face multiple charges, including firearm offenses and possession of drugs in dealer quantities.

Brown is expected to be arraigned Friday in Cambridge District Court.

Authorities have so far been silent about two fatal shootings took place early Oct. 14. At approximately 3:30 a.m., Ednilson Dacosta, 28, of Dorchester, was shot in a car on Windsor Street at Evereteze Way, near Inman Square in East Cambridge. The victim was taken to an area hospital, where he was pronounced dead.

At approximately 3:37 a.m. a second fatal shooting occurred on Canal Lane in Somerville. Kevin Raymond, 20, of Somerville, was shot in a parking lot. He too was taken to an area hospital, where he was pronounced dead.