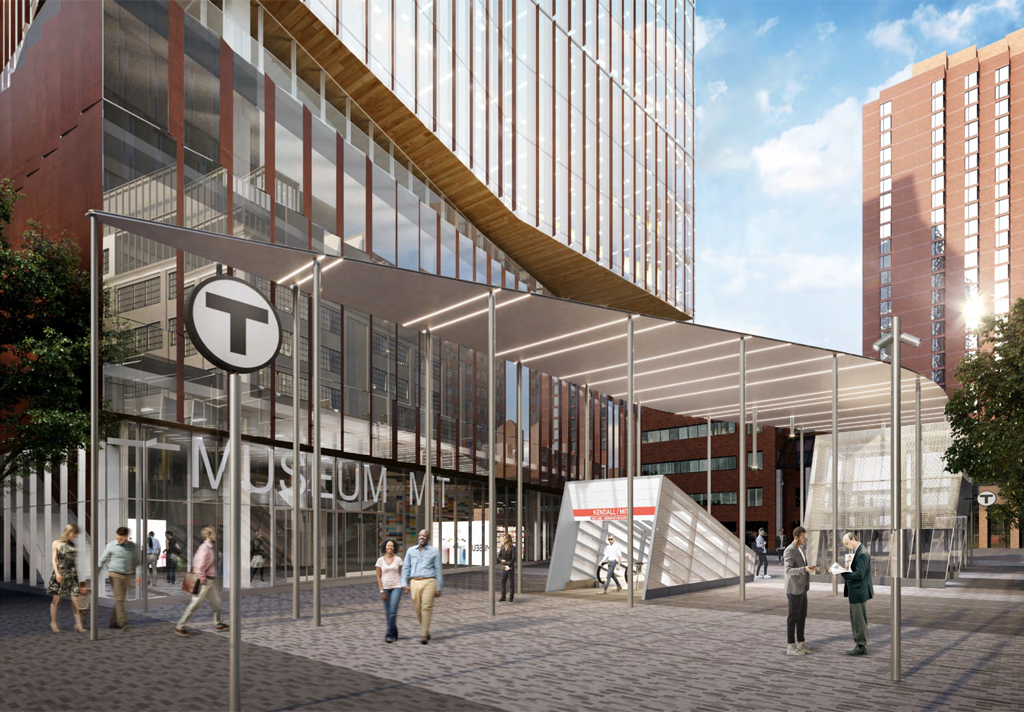 The Planning Board expects to hear an update this week on improvements to a Kendall Square T stop headhouse that will let off riders by the relocated MIT Museum.

City Council, 5:30 p.m. Monday. With 10 items on the city manager’s agenda that are largely transfers of money for non-controversial purposes, and two even less controversial councillor policy orders, this is a light and potentially quick meeting. But the Law Department has produced answers to questions about recreational marijuana zoning – councillors hoped to have the answers a week ago – and residents Abra Berkowitz and Ilan Levy have filed a petition to block Eversource from putting in a substation in a residential area by the Kennedy-Longfellow School.

Inman Square coffee talk, 6:30 to 8 p.m. Monday. There’s no formal presentation, but residents can stop by, have a snack, ask questions and learn more about construction associated with the Inman Square Intersection Improvements Project.

The talk will be held at Bukowski Tavern, 1281 Cambridge St., Inman Square.

Rally for Mass Ave and Critical Connectors, 6 to 7 p.m., Tuesday. The Cambridge Bicycle Safety group brings riders and friends together to kick off its next big campaign: to get continuous protected bike lanes and bus priority for the entire length of Massachusetts Avenue in Cambridge.

The rally will be held on the front lawn of City Hall, 795 Massachusetts Ave., Central Square.

School Committee Buildings and Ground Subcommittee, 6 p.m. Tuesday. Members will review the facilities policy and get an update on building plans. (Note: This meeting was canceled Tuesday.)

Planning Board, 6:30 p.m. Tuesday. The board has to grapple with the 10,000 square feet of co-working space Verizon installed at its 10 Ware St., Mid-Cambridge, building near Harvard Square; Verizon is looking for a zoning overlay district that’ll satisfy city officials who say it wasn’t allowed. There will also be an update on Kendall Square T stop headhouse improvements – part of the Massachusetts Institute of Technology’s new East Campus. Televised.

White Nationalism, Community Response, and the Rule of Law, 7 to 9 p.m. Tuesday. Free. Elden Rosenthal, a civil rights attorney with the Southern Poverty Law Center, and Steven Gardiner, a research analyst with Political Research Associates, will talk about the epidemic of white nationalist hate groups and strategies to combat hate, hosted by Temple B’nai Brith of Somerville and the City of Somerville Human Rights Commission.

The panel discussion will be held at The Center for Arts at the Armory, 191 Highland Ave., Somerville.

Historical Commission, 6 p.m. Thursday. Renovations and alterations to the Harvard Square newsstand kiosk and surrounding plaza are on the agenda.

Human Rights Commission, 6 to 8 p.m. Thursday. New business includes discussion of searching police records to screen public housing tenants and about the potential impacts people of color would feel from a longer elementary school day, which has been proposed for city schools.

The commission meets in the second-floor conference room at 51 Inman St., Mid-Cambridge.

Panel of pros take questions on all things recycling

Waste Myth Busters, 6 to 8 p.m. Thursday. Free. Where does recycling go after it’s put it in the bin? Why can some plastics be recycled, but not all? What is happening with China’s recycling policies, and why does it matter here? Rachel Perlman, an MIT doctoral student focusing on waste management; Cole Rosengren, senior editor of Waste Dive; and Mark Evans, of Casella Recycling, form an expert panel to talk about about the global and local recycling market, with Q&A and discussion afterward. Light refreshments will be provided.

The talk will be held at the Tufts Administration Building, 167 Holland St., near Teele Square, Somerville.