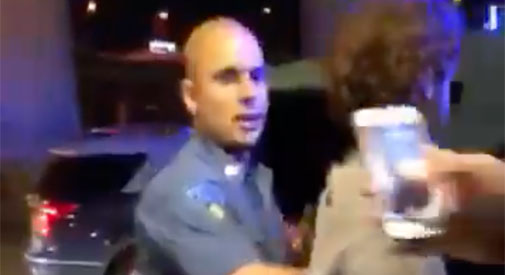 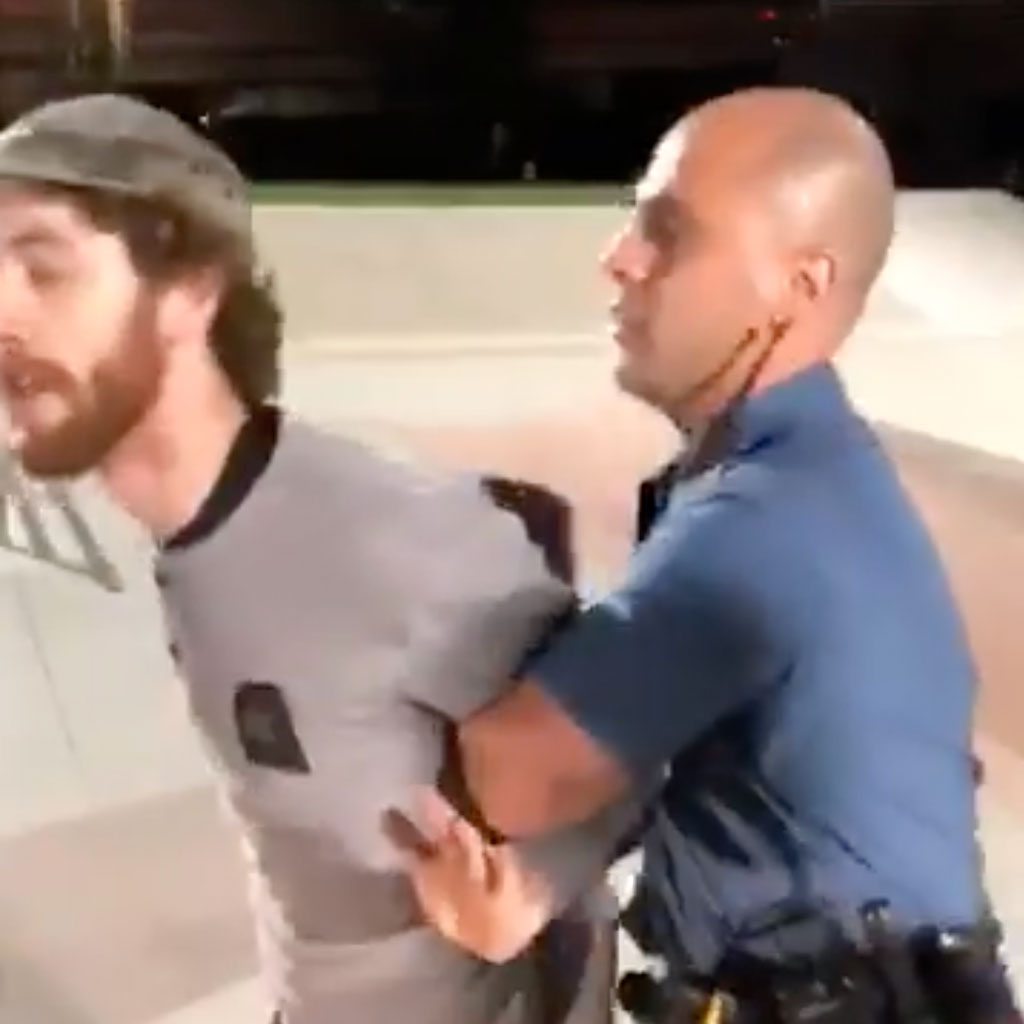 Skateboarder Derek Hanlon is arrested Sept. 30 at Cambridge’s Lynch Family Skatepark by state police trooper Ziad Kamel. The image was taken from a video shared on social media and attributed to Eric Abo.

The state police trooper seen on video wielding a Taser during a confrontation with bicyclists Saturday has been involved in a separate Cambridge incident with a group, also drawing complaints of excessive force that have been rejected by his employer.

On Saturday, trooper Ziad Kamel was among those responding at 10:40 p.m. to North Point Park to a resident’s complaint – sent via Cambridge city police, who don’t have jurisdiction over the state-owned land – that there were drunken, naked partiers within, although the park closes at dusk. (The number of bicyclists, who were there after taking part in the 10th annual World Naked Bike Ride, varies by account, as do accounts of how many were nude.) State police arrived in force, and arrested Michael Worrell, 37, of Dorchester, when he didn’t leave as asked. The arrest agitated other bicyclists, and during the confrontation at least one Taser was raised and pointed at bicyclists upset about his treatment.

Worrell pleaded not guilty to charges of resisting arrest, trespassing and disorderly conduct and was released on his own recognizance until a Sept. 5 court appearance.

Kamel was also involved in the Sept. 30 arrest of two men using Cambridge’s Lynch Family Skatepark after dusk. At that state-owned property, a group of roughly 40 people were using the facilities when troopers arrived to kick them out; while troopers cited rules about the park closing at dusk, the Charles River Conservancy website advised that the property was “open from dawn to 9 p.m. Lights were installed during the fall of 2018 to allow for park operation past dusk through a partnership between the City of Cambridge and” state Department of Conservation and Recreation.

In videos from September, Derek Hanlon, 27, of Boston, is shown being held by Kamel and asking why he’s being arrested, while Kamel demands he comply with the arrest. Finally, Kamel throws Hanlon to the ground and, after a more intense discussion in which Hanlon continues to argue that he was merely skating in a designated skatepark where he donated money for the lights that allow nighttime use, Kamel and officer restrain him. Kamel tries to lift him from the ground and Hanlon gives a sudden sustained scream.

“The defendant continually resisted while approximately 30 other skaters began to move closer,” state police said in a press release. “The trooper then took necessary action to overcome the defendant’s resistance and make the arrest quickly before the situation escalated further. Fortunately, neither the trooper, nor the defendant, nor any bystanders were injured by the defendant’s refusal to comply with the trooper’s directive.”

The charges were dropped five days later. Reporting of the incident included Boston magazine’s Spencer Buell asking the value of “the pointless, needlessly aggressive arrest of a local skateboarder … a ridiculous and over-the-top move to perform martial arts on a basically polite guy who is only resisting arrest by an extremely loose definition of that term, and who had no business being arrested in the first place.” It was reported on by national media too; Luke O’Neil wrote in the New York-based Observer to say simply that video of the arrest shows Kamel “using excessive force in his attempt to detain Hanlon, who was speaking calmly with the officer before being tackled and assaulted.”

Kamel was also identified as using excessive force by at least one member of the “Somerville 18,” the Black Lives Matter protesters who chained themselves to concrete-filled barrels to block traffic in January 2015 on Interstate 93 in Milton and protested without barrels on the interstate in Medford.

Kamel acted appropriately and in accordance with all departmental policies, rules and regulations during his response to both the Lynch skatepark and North Point Park trespassing incidents, said Dave Procopio, director of media communications for the Massachusetts State Police.

“Specifically, trooper Kamel’s actions in enforcing the law at North Point Park, and in bringing the situation to a resolution despite the presence of large, hostile crowd attempting to interfere with the lawful arrest of a resisting defendant, were appropriate,” Procopio said.

Kamel wrote that he saw Worrell holding a phone and recording instead of leaving after “multiple” orders, and that Worrell became argumentative and smelled like he had drinking. While another trooper tried to restrain him, Kamel said, he activated his Taser and “issued him a laser warning [and] at that point, the large naked group became aggressive and agitated.” (A laser warning, also known as a spark warning, is when a trooper revs his weapon to generate a threatening light and noise.)

Any time a trooper shows a Taser or engages in any use of force, the department conducts a standard use-of-force review, Procopio said. “Based on the facts and circumstances of the situation faced by the trooper, his display of his department-issued [Taser] was in accordance with his training and department policy. His doing so may well have prevented injuries to the troopers or to members of the hostile crowd by quelling the volatile situation,” he said.

After the violence of the arrest, bicyclists who remained on the scene said they were puzzled to then be told by a different state trooper that they could “go back to what they were doing.” The suggestion is audible on video from the park Saturday.

Cantabrigian Loren Crowe, who noticed Kamel’s presence at both arrests, wondered on Twitter about a “heavy-handed” response by state police that “only seems to have provoked the crowd. What were the police defending against? Couldn’t they have sent a friendly one car patrol to ask the park goers to wrap it up and head home?” There are people in the park every night, after dusk, Crowe said.

A request has been filed with the state to see Kamel’s disciplinary record. (Update on Aug. 8, 2018: Kamel has “no history of receiving discipline,” said Sean W. Farrell, deputy chief legal counsel for the Massachusetts State Police. “The subject trooper was the subject of two complaints, but those were informally resolved.”)

Kamel was identified in January by The Boston Globe as one of the many state police troopers earning more than $200,000 annually. From base pay of $87,949, he brought home $215,680 after overtime, details and other pay, the Globe said.

He also made news in late June by finding the suspect in the stabbing of a runner on Boston’s Charles River Esplanade. Police say Luis Olivo, 37, of Boston, stabbed a 23-year-old woman in the head, tackled her and hit her repeatedly. Kamel found Olivo minutes after the attack on nearby city streets, reported Dave Canton of MassLive. “Olivo tried to run away, throwing a pair of scissors into the dining area of a restaurant. Kamel chased the fleeing suspect down, struggled with him and then used his Taser-style non-lethal weapon to subdue the accused assailant,” MassLive said.