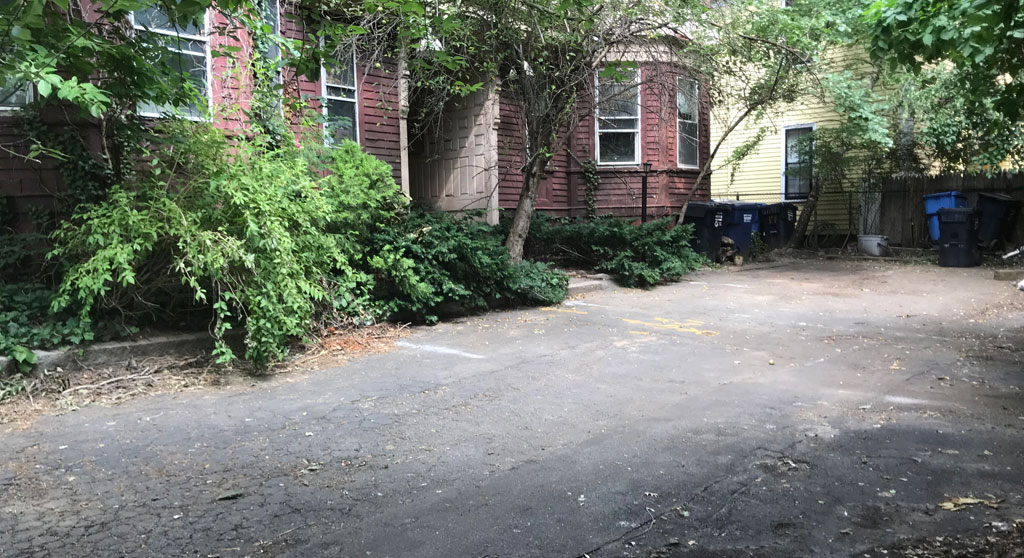 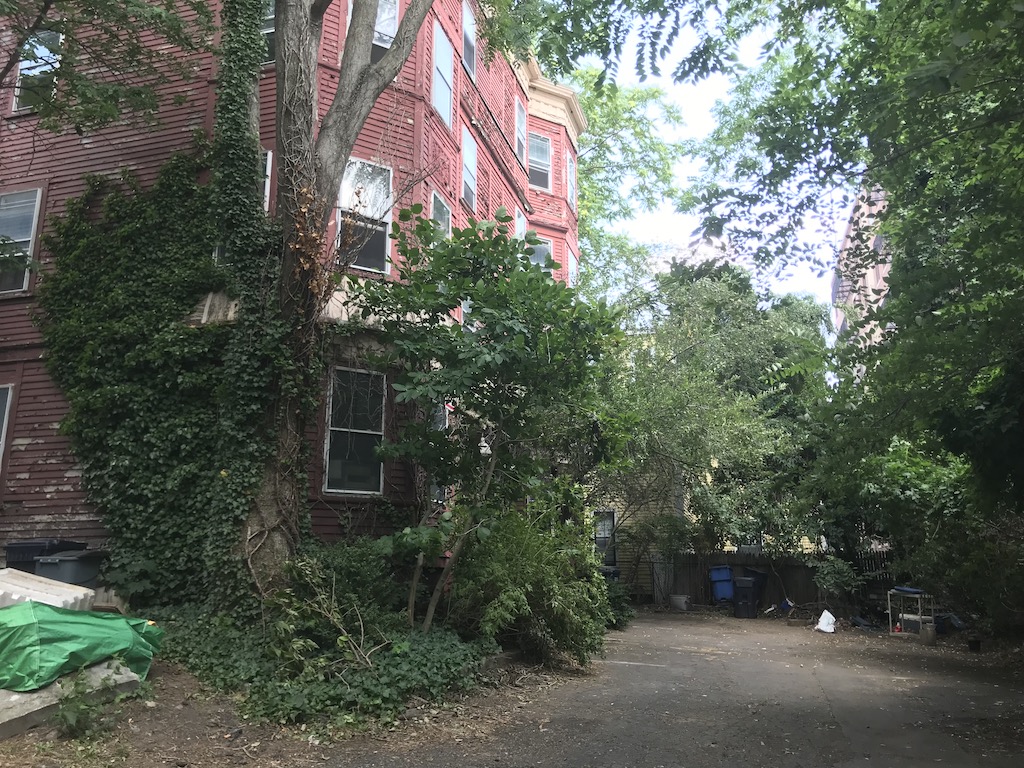 The space in front of 12 Arnold Circle is empty for the first time in years. (Photo: Marc Levy)

Three years of legal wrangling ended last week, on one front, when a developer became the new owner of a deteriorating apartment building at 12 Arnold Circle. But almost immediately, Cambridge officials threw a temporary wrench into buyer Edward Doherty’s plans to gut the building so he could begin building 12 new condominiums to replace what the city had called a dangerously dilapidated structure.

The Inspectional Services Department has held up approval of Doherty’s application for a demolition permit, citing unspecified “legal” considerations, Doherty said Monday. He can clean up the property and clear out the building, but he needs the permit to do anything else, he said. “It’s a power play to put pressure on us” to settle a related court case over affordable units in the new project, an exasperated Doherty said.

It promised to be one more delay in a long history of legal and personal maneuvering that has kept the building in its neglected state – but the delay was short-lived. After Cambridge Day asked for a response to Doherty’s statements, city spokesman Lee Gianetti said the permit was issued Tuesday morning.

Supposed to clear the way

The sale to Doherty at 12 Arnold Circle, in Mid-Cambridge near Central Square, was supposed to clear the way to bringing the property into compliance with health and safety standards, resolving one court case. Another court suit still pending – the one that Doherty’s “power play” accusation referred to – will determine whether Doherty must reserve two of the new units, or 20 percent, for lower-income residents as required by the city’s inclusionary housing ordinance. Former owner Kenneth Krohn, Doherty and the city are still arguing over the reach of the ordinance.

Doherty bought the building for $4.6 million on July 24 from Krohn, 81, the mathematics whiz and felon who also holds a law degree. For decades, Krohn, later with his wife, had lived in one apartment and used the rest of the building to store his belongings. Krohn paid $95,000 for the property in 1974.

City inspectors ordered Krohn to clean up and repair the building in 2011 after finding water damage and much of the interior space crammed with “combustible materials”: his personal papers and records. The city ordered water and utilities turned off, and Krohn and his wife moved out, but Krohn continued to plead for more time, saying he didn’t have the money or physical ability to comply with city orders.

In 2016 the city sued Krohn to force him to comply, asking a judge to name a receiver to carry out repairs. The receiver, Woburn attorney Daniel McAuley, focused on finding a buyer to redevelop the property.

It seemed that would work when Cambridge developer Sean Hope reached an agreement with Krohn to buy the building for $5.4 million. The deal fell through when the Board of Zoning Appeal ruled in November that any project would have to comply with the inclusionary housing ordinance.

Finally, Doherty stepped in, and this time the players agreed to separate the issue of buying the building from the inclusionary housing debate. Doherty will pay Krohn a bonus of $1 million if a judge rules he doesn’t have to set aside any affordable units.

Even so, it has taken months and several court appearances to complete the purchase. In the most recent skirmish, Doherty asked the court on June 21 to end the receivership before the sale was consummated, arguing that his attorneys told him McAuley’s bill for services could constitute a claim on the property that would gum up the transaction.

The city opposed Doherty’s request, saying McAuley was supposed to ensure that the property was cleaned up and brought up to code. Without a receiver, the city would have no recourse if that didn’t happen, a city brief said. Krohn’s continued involvement through the inclusionary housing case could delay the cleanup if there were more legal disputes, the city argued.

Middlesex Superior Court Judge Maureen Hogan sided with Doherty. The sale to him “effectuates the purpose” of having a receiver: repairing the building so it meets city safety standards, she wrote in a decision July 18. She ordered Doherty to finish repairs “in a prompt and businesslike manner” after he receives the necessary city permits.

On July 27 two moving trucks were parked outside the building. Krohn and his wife, Karen, were still removing their possessions, although they had agreed to finish clearing out their belongings by the date of the sale, July 24. That was three months after a previous court order. Karen Krohn said Doherty had given them the weekend as extra time.

Two days later, the space in front of 12 Arnold Circle was empty for the first time in years, but discarded materials still filled one side path and several small storage boxes and a pail sat on the curb outside 10 Arnold Circle. In mid-morning, an exterminating company truck pulled up.

Neighbors at 10 Arnold Circle still seek reimbursement for insurance deductibles and other costs after a rotten tree on Krohn’s property fell in a windstorm last year and damaged their building.

The affordable housing dispute is in Land Court, where Krohn and Doherty challenge the city’s decision to require affordable units at 12 Arnold St. Krohn has filed a brief arguing that the ordinance itself is illegal because it is a form of outlawed rent control, he says. The next Land Court hearing is Aug. 27.

Court papers in Superior Court indicated that the city is trying to negotiate a settlement of the case with Doherty, and Krohn has refused to go along.