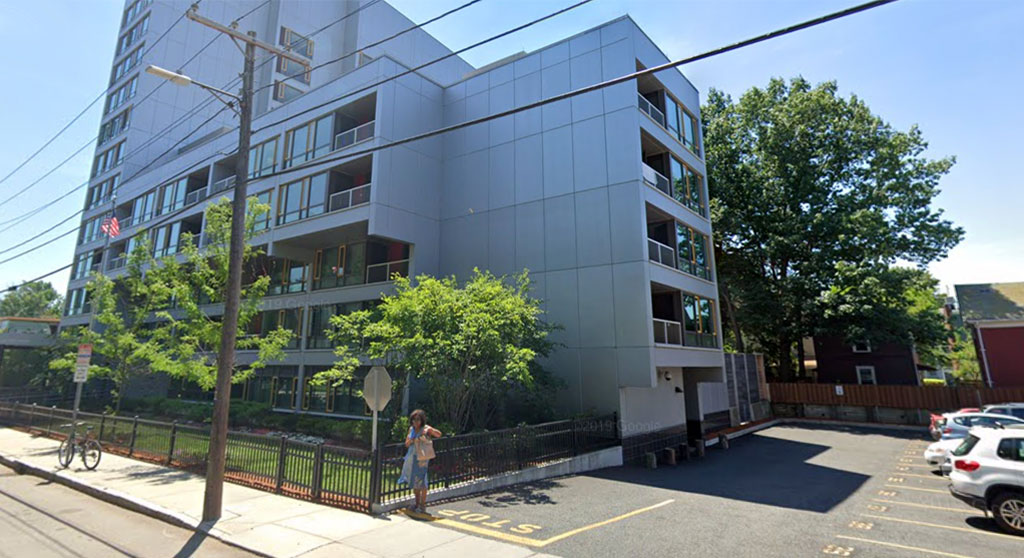 Romelia Gallardo, 80, died after being hit by a car outside her home in the LBJ Apartments in Cambridgeport. (Photo: Google)

Middlesex County prosecutors have reduced the charge against a woman whose car allegedly ran over and killed an 80-year-old resident of LBJ Apartments in Cambridgeport as the victim navigated using a wheeled walker in the development parking lot.

Ashley Monturio, 41, of Pembroke, called 911 after the accident and reported that Romelia Gallardo was on the ground and she didn’t know why, then drove away despite a dispatcher’s request to stay at the scene. She told the dispatcher that she needed to go to a job interview.

There were no witnesses to the incident on Sept. 6, 2018, but surveillance video reportedly showed the license plate of Monturio’s car. She later went to Cambridge police, where she was arrested. The public housing development, on Erie Street near Brookline Street, houses low-income seniors and younger disabled residents.

There was no explanation except a motion filed by Assistant District Attorney Ashlee Mastrangelo to amend the charge because “the commonwealth’s investigation and review of the relevant evidence provides for the complaint to be amended as such.”

Her attorney, Thomas Hoopes, previously declined to comment on the case.

Monturio has pleaded not guilty. She has remained free on her own recognizance while hearings were repeatedly rescheduled.

On Sept. 16 she didn’t show up for a court session and a default warrant was issued, according to the court docket in her case. There was no mention of the warrant on Tuesday. Asked what happened, Meghan Kelly, spokeswoman for Middlesex District Attorney Marian Ryan, said the warrant “was cleared.”

In another pedestrian death in Cambridgeport, not long after Gallardo was killed, prosecutors have upped the charge. Daniel Desroche, 53, of Methuen, initially was accused of negligent operation after the dump truck he was driving struck Jie Zhao, 27, on Oct. 5, 2018. Zhao was walking behind the truck as it backed through an intersection; she died when Desroche’s truck ran over her in reverse, then struck her again as the truck moved forward.

On June 27, prosecutors stiffened the charge against Desroche to vehicular homicide by means of negligent operation. A trial is scheduled Nov. 18. On Tuesday, a Cambridge District Court judge approved the prosecution’s bid to bring a New Jersey woman here as a witness. According to the police report, several drivers said they saw the truck backing toward Zhao and they beeped their horns and yelled at Desroche in a futile effort to stop him from hitting the young woman.