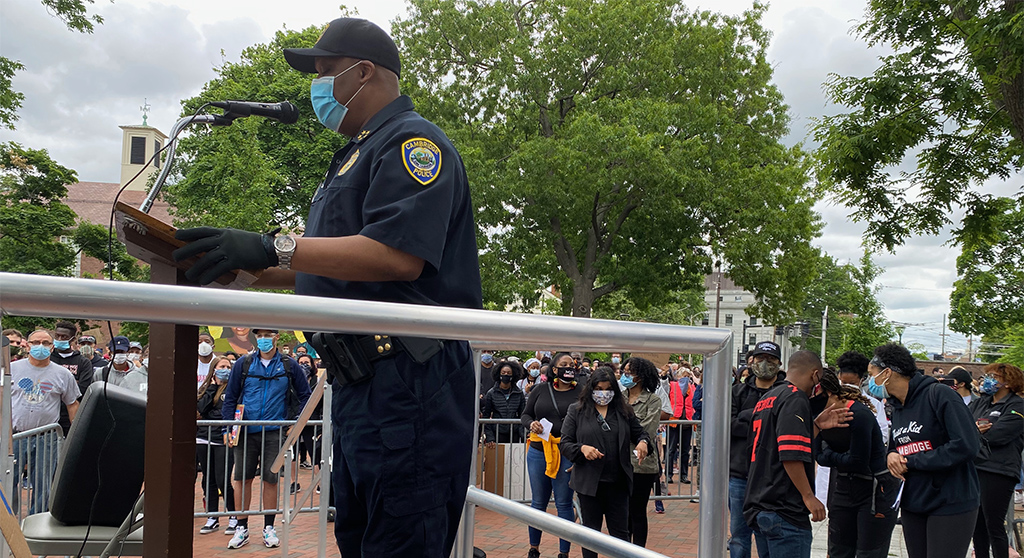 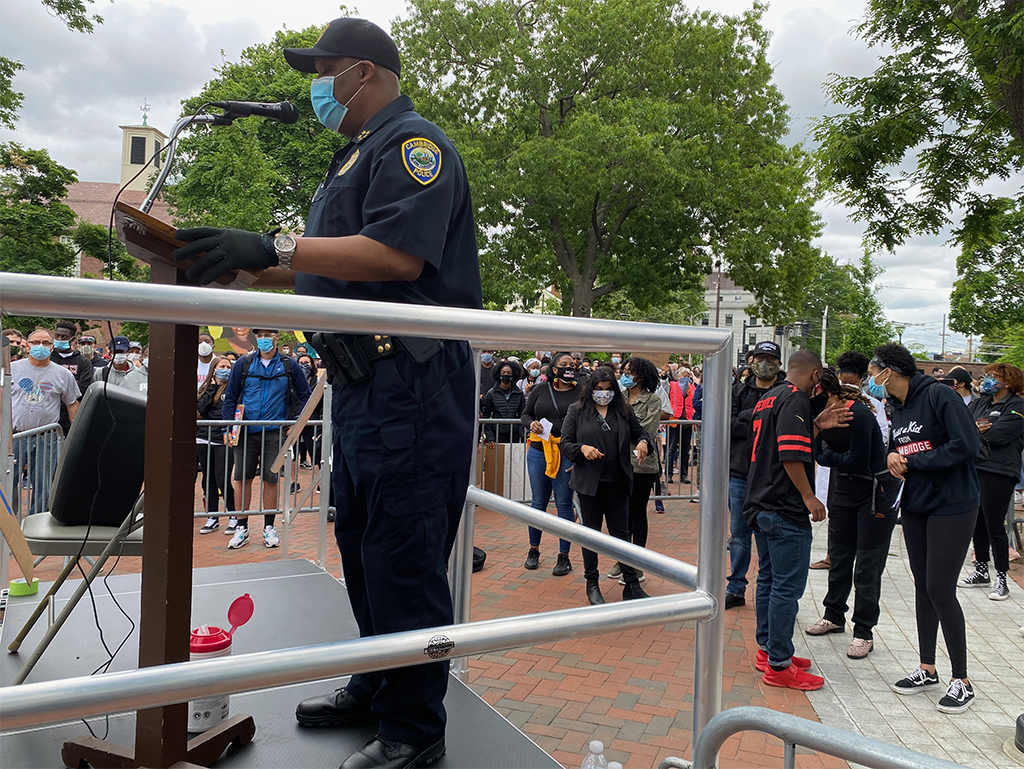 City officials exploded in anger at each other Wednesday, with the police commissioner and city councillors accusing each other of disrespect and lies over the redirection of some proposed police funding toward human services. At the height of the argument, the mayor felt forced to call a 10-minute recess so people could calm down.

Ultimately, nothing was decided Wednesday. After the recess, councillor and author of the order Jivan Sobrinho-Wheeler exercised his “charter right” to end discussion until the next council meeting, Monday. His co-sponsor on the order was councillor Quinton Zondervan. Both are people of color.

Their antagonists on the issue were police commissioner Branville G. Bard Jr. and councillor E. Denise Simmons, who are black. 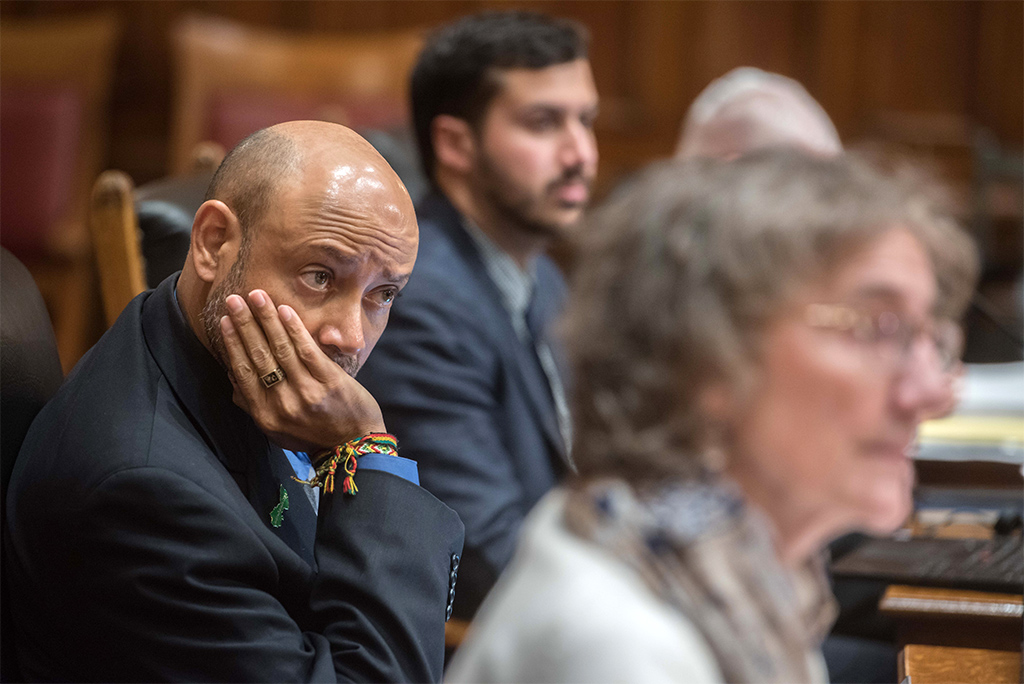 Councillor Quinton Zondervan, with councillor Jivan Sobrinho-Wheeler behind him, is seen during a January council meeting. (Photo: Derek Kouyoumjian)

The call to redirect $4.1 million from police funding toward public health and safety measures – a nod to a nationwide call to defund police departments from responsibilities that needn’t be done by law enforcement – drew a five-hour meeting Monday devoted just to public comment. Council discussion was delayed to the special, continued meeting Wednesday.

That’s when Bard gave lengthy testimony in which he accused Sobrinho-Wheeler and Zondervan of engaging in “flat-out bad governance,” with the 3,000 emails that came in and nearly 400 people signing up for public comment – all but a couple speaking in favor of redirecting the funding – “not true deliberation” in which Bard “didn’t hear authentic voices” but just “a bunch of people looking for their ‘I’m a black ally’ receipts, hoping they could somehow use it to pay off white guilt.”

The Cambridge Black Pastors Association “believe that defunding the Cambridge Police Department would have an adverse effect on our community,” Bard said, reading from a letter.

As a degreed expert on race in policing, Bard said he found it “befuddling” that he wasn’t consulted in the writing of the order and said the makers of the motion displayed a “level of arrogance that’s concerning.”

Bard said the voices he’d heard Sunday at a protest against police brutality and institutional racism were “authentic voices, many of whom were black and brown”; a black co-organizer of the event ended it by exhorting those 3,500 people to turn their attention to Monday’s meeting of the City Council, because it was “where the real work begins.”

The agenda also included the start of a discussion on whether police should wear cameras, which was sent to committee for discussion, and a declaration that racism is a public health crisis.

Some of Bard comments dodged the text of the councillors’ footnoted motion, which said it reflected a combined campaign by Black Lives Matter to “#DefundThePolice and #InvestInCommunities” and hoped to see the money “redirected toward measures that promote public health and safety in other departments.” Bard spoke at length about the loss of services that would accompany losing the $4.1 million without acknowledging that those services would be led by “other departments.”

“This city has come to rely on the department to do so much more” than patrolling and responding to calls for service, Bard said. “You need to look no further than the multiple roles that members of this [police] department took over for the city during the throes of the Covid-19 emergency.”

Bard said cuts would also make it harder “to be prepared for large-scale events like July Fourth, the Caribbean Carnival or a visit by President Biden next year.” 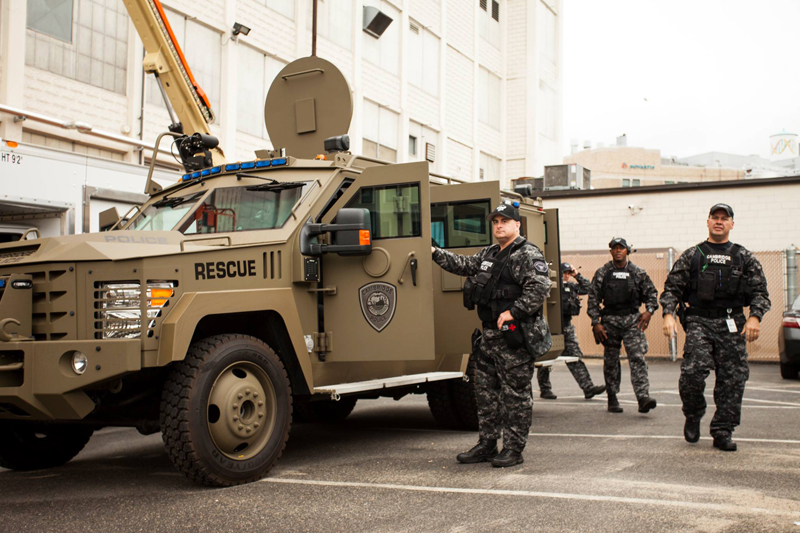 The Cambridge Police Department parked its 18,000-pound armored vehicle – deemed a “rescue vehicle” by a police spokesman and labeled so – near a rally held in July 2016 by Black Lives Matter Cambridge. This photo is taken from the group’s Facebook page; click on the image to see the original status update.

Zondervan grew increasingly upset during Bard’s testimony, including at the commissioner’s statement that “we don’t get military equipment. We don’t have any – at all. We don’t have tanks, we don’t have anything like that.” The department has a vehicle called a BearCat, which is described by a police spokesman as a “rescue vehicle.” The maker, Lenco, describes the BearCat as having all-steel armor construction that offers “high ballistic protection.” It was funded in 2014 by the Urban Areas Security Initiative of the Department of Homeland Security, which required that 25 percent of the grant funding go to terrorism prevention.

Zondervan called a point of order for Bard’s “not factually correct statements,” including the allegation that Bard had not been consulted in the writing of the motion – the councillor said Bard chose not to respond to several emails – but Simmons began calling out her own point of order, and the two argued directly. At one point, Zondervan, Simmons, Bard and Mayor Sumbul Siddiqui were all talking over each other, with Siddiqui asking, “What are we doing here?”

Bard was “talking for 30 minutes,” Zondervan yelled over the noise. “That is inappropriate.”

“You started this,” Simmons said.

While the city clerk polled councillors for the votes to recess, Bard asked the mayor: “Is there no way you can sanction [Zondervan] for this?”

A video of the moments leading up to the recess:

When the council came back, Bard wrapped up his remarks, calling the motion a “hollow gesture that does nothing to promote reform or eliminate racism” when his department already was suffering low morale from knowing that “Americans are devastated, and that they’ve been let down by law enforcement again and again.”

She also expressed upset that the community had not been so anguished or energized by past deaths of people of color, citing the 2011 killing of former Cantabrigian Eurie Stamps Sr., 68, by Framingham police serving a search warrant for someone else’s drugs; and the 2016 death of Anthony Clay in The Port in a shooting that Simmons admitted was committed “by another black man” who was not a police officer.

“I just find it so interesting that this righteous indignation comes [now]. I just have to question the outrage, because it wasn’t there then,” Simmons said.

“I agree with the argument”

Despite going on at length in seeming anger over the order, she summed up at one point that “I don’t understand the way this order suggests that the problem is only with the police department. I maintain we should take a critical look at all departments. Let’s start with the City Council office – let’s talk about the bias that we have within. If there’s a problem with this city, it starts here, with the policymakers,” Simmons said. In addition, she said that “police departments are not identical across the country” and that reforms needed in Minneapolis had already taken place in Cambridge, with many of Bard’s reforms done unasked other than by people in her community who were scared by gun violence.

Yet despite the fury with which she spoke, Simmons returned a few times to themes of support for the principles underlying the motion.

“I certainly agree with the overall intent of the order,” she said. “I do agree with those who say we have placed far too many roles upon law enforcement officers, turning them into peacekeepers, social workers, domestic violence responders, homeless outreach workers, mental health crisis counselors. Many of these roles used to be filled by other agencies and organizations” that have been defunded.

“I agree with the argument that this is not working in the best interests of the city. We must start to figure out a better path forward,” Simmons said.

She was upset with the speed with which the motion was proposed to happen and with Bard being cut out of the writing of the motion – either missing Zondervan’s comment about reaching out to Bard repeatedly with no response, or deciding it wasn’t true.

Returning to a theme raised by Bard, she knew of “many people of color who were a little alarmed at the seemingly disproportional number of white people speaking to the issue, rushing to announce their solidarity with the Black Lives Matter movement,” she said. “Some of the folks I heard from were offended at the number of white people speaking up on their behalf, when really this is not only a time for Black Lives Matter, but a time for black voices to be heard.”

Sobrinho-Wheeler spoke last, saying mildly that the motion had been intended to begin a conversation, not end it, and that he appreciated the comments by Bard and Simmons. But the “defunding” of police departments was a goal of Black Lives Matter, he said, and the motion was made by two men of color who have had their own run-ins with police that left them fearing for their safety – just like Bard, who told the council: “I can’t tell you how many times I’ve been pulled over and worried that the situation could go wrong because I carry a gun and I also carry brown skin.”

Update on June 12, 2020: The city manager has updated the council with news that the city will be reappropriating a $2.5 million increase to the police department budget to hire positions on hold due to effects of the coronavirus lockdown, councillor Patty Nolan said. The positions include a director of equity and culture, housing case managers, social workers and early childhood education positions, who could all be hired as soon as July.