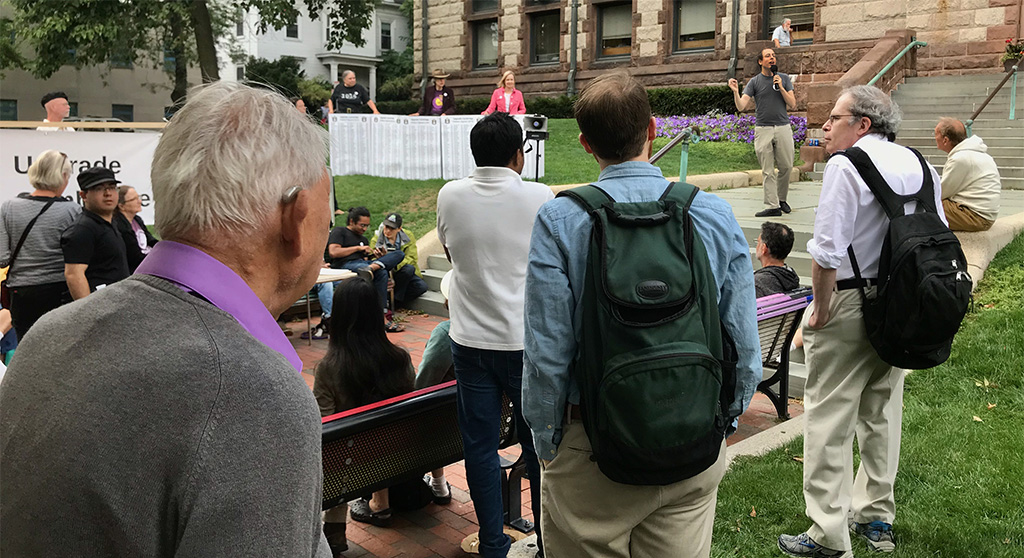 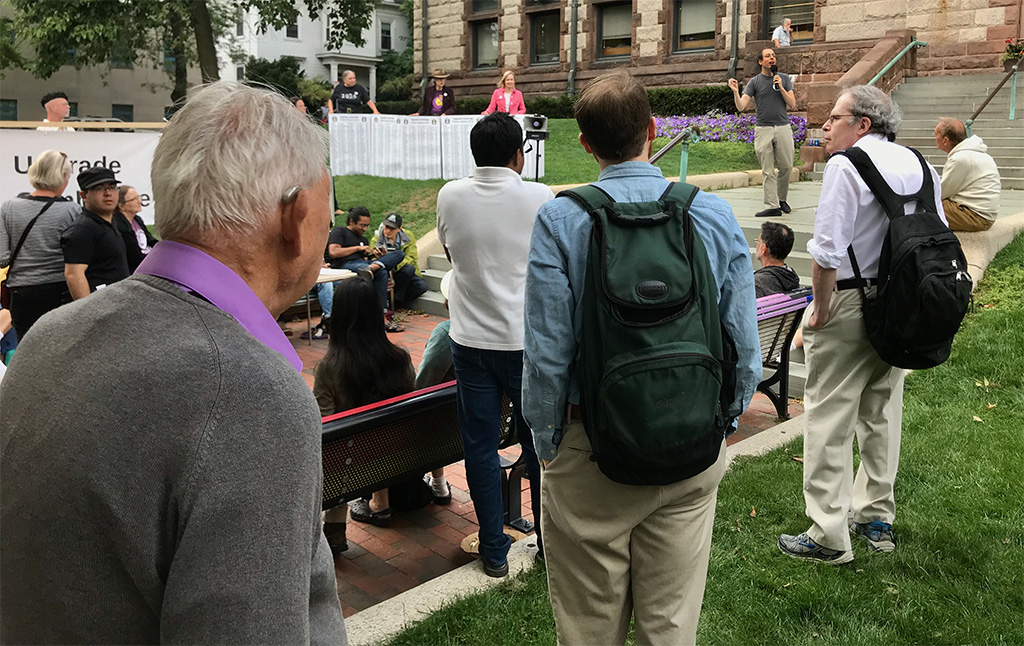 The citizens group Upgrade Cambridge rallies at City Hall in September for a study of municipal broadband. (Photo: Marc Levy)

A yearslong lack of action on a study of city-owned Internet led to a rare rejection of part of next year’s proposed budget, with city councillors voting 3-6 on Tuesday against funding for the Information Technology department.

The $2.9 million was one of more than two dozen budget items up for review during a six-hour Finance Committee hearing, but it produced the most sparks, with councillor Jivan Sobrinho-Wheeler announcing during debate over municipal broadband that he wouldn’t be voting against just technology funding, but against the $715 million budget as a whole.

“When the council says this is a priority, we should be seeing progress on this,” Sobrinho-Wheeler said of a broadband study.

Sharp questions about the lack of a municipal broadband feasibility study – and references to other cities that have installed their own affordable broadband system and paid it back within 10 years – provoked a passionate response from City Manager Louis A. DePasquale.

“We have contacted many cities and most have not paid this back over 10 years. They are not similar to the City of Cambridge … I really don’t think it’s being discussed fairly what the financial impact of this is,” DePasquale said. “We will discuss it, but this is not something that’s easily paid back. And I just think to hear that over and over again, when we hear our consultants say that’s not the case, is unfair to me in the city.”

Even that scrap of information was news to the council.

“If the city has already done this, we should see that,” councillor Dennis Carlone said.

DePasquale said he would presented on broadband, with advice from “our consultant on why we don’t think a million-dollar investment at this time is right, leading to a billion-dollar investment in the middle of the financial situation that we’re in.” But the coronavirus crisis that arose in March preempted the presentation, DePasquale said: “We were a victim of Covid-19.”

“For a million dollars, we should hear from our consultant on why this is not the best investment for the city,” DePasquale went on, saying that if the council ultimately disagreed with a study he would “take the blame for not having done that earlier, but it is in the middle of the Covid. I would hope we would at least get that consideration.”

Councillors shook off the explanation, pointing out that years have passed since a city-convened task force suggested a study in 2016. The lack of response has sparked the creation of a citizen group to press for it and several council orders that have been largely ignored. And blaming the pandemic for a delay didn’t please councillors who said it was the other way around: The pandemic was harder for residents because municipal broadband had been delayed.

Results of a lack

With students forced to learn remotely at home, the school district has been providing around 400 wireless hotspots at $40 a month to households that lack adequate Internet.

Though city data may show that 96 percent of residents have online access, “they haven’t on their phones, right? And so it’s not really about that, but about reliable, affordable access, and that there is a much broader gap,” councillor Marc McGovern said.

It was McGovern’s first time rejecting a council budget item as a protest.

More in the budget

Last year, when the full budget came to a vote, dissatisfaction over school district funding resulted in 7-2 approval, with the minority formed of Quinton Zondervan and then-councillor Craig Kelley. Voting in favor but under “protest” was E. Denise Simmons.

The city’s full, $715 million proposed operating budget for the coming fiscal year is up $35 million (or 5.1 percent) over the current year; $214 million of it is for school district funding. There’s also $312 million in capital projects proposed for the next fiscal year.

The $2.9 million Information Technology budget includes around $328,000 for new positions. Patrick McCormick, who joined around six weeks ago as chief information officer and department director, said they were a physical security expert and a network engineer.

The vote against the department budget had Mallon, Carlone, McGovern, Nolan, Sobrinho-Wheeler and Zondervan against. Mayor Sumbul Siddiqui, Simmons and Tim Toomey voted to approve.

Members of the citizens group, Upgrade Cambridge, reacted to the hearing on social media. Christoper Schmidt noted that DePasquale “has not presented a shred of evidence of [his] claim” to having advice from a consultant against broadband. Saul Tannenbaum called the council vote “extraordinary.”

“It’s as close as Cambridge comes to a vote of no confidence,” Tannenbaum said. “And, for the manager, it was well earned. He’s had years to make his case against municipal broadband and chose not to.”