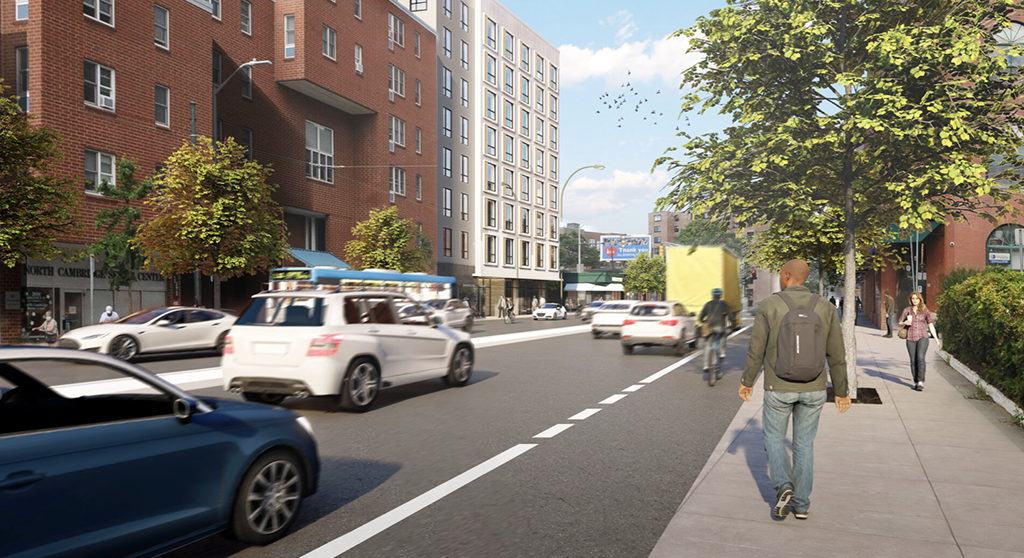 A nine-story building with affordable housing is proposed for 2072 Massachusetts Ave., near Porter Square – and is on the Planning Board agenda for Tuesday.

City Council, 5:30 p.m. Monday. Coronavirus issues are likely to take up a good chunk of this meeting, since there are several pandemic-related matters coming up in addition to a scheduled briefing on recent conditions and actions taken by city staff. Councillors are asking about getting more comprehensive data on the disease in Cambridge; helping businesses buy air filtration systems for indoor use, just as there were funds for outdoor heat lamps; expanding testing in nursing homes; using “backwards” contact tracing to identify transmission clusters; and sending out vans to do mobile Covid-19 testing as soon as December.

There’s also a resolution asking Comcast to hold off on an Internet use data cap. There’s no telling if this will inspire sharp words for City Manager Louis A. DePasquale, who persisted for years in blocking a feasibility study for city-owned broadband that would have broken Comcast’s monopoly and make its threatened restriction moot. And there could be questions about a request for $450,000 more to “cover unanticipated increases in costs relating to legal matters,” the second recent such request but still carrying the 13-person Law Department only until the end of this calendar year.

On the side of things that promise to serve the community in concrete ways, there’s a $9.5 million request to fund the Foundry community building, where design and construction is estimated at $45.5 million.

Orders set aside by “charter right” a week ago are due to return too, including one about an arts installation that once was to honor the passage of the 19th Amendment to the Constitution (giving women the vote) but now also to reflect the importance of the Voting Rights Act of 1965; and another ostensibly meant to “strengthen community bonds and ensure equitable access to neighborhood organizations,” which is considered hostile by the leaders of several of those groups.

Group Covid-19 tests get a look for school district

School Committee, 6 p.m. Tuesday. Committee members will explore a pool testing strategy, estimated to cost about a third of standard individual tests, that might spot coronavirus among asymptomatic members of the school community; and whether it’s feasible to use the nearby War Memorial Recreation Center Field House for student “well-being and social opportunities” that could handle mental health challenges from the pandemic lockdown. (The building has been used as a homeless shelter during the Covid-19 crisis, but should empty soon as the city relocates residents to a repurposed Spaulding Hospital space.) There are also calls to “take all necessary steps to host” an SAT exam, and second hearings for a move to televise all committee roundtables automatically, and to use restorative justice techniques for conflicts involving committee members. Televised and watchable by Zoom video conferencing.

Planning Board, 6:30 p.m. Tuesday. There’s a zoning change afoot for home-based businesses, particularly for artists and other creative professionals and perhaps most significantly to allow residential kitchens used by home-based food businesses. (Cambridge Day wrote about this in August, followed by a Sept. 30 meeting of a City Council committee on the topic.) But the board will also look at “hybrid uses,” such as when a retail store offers classes or lectures. Also on the agenda is a discussion of the 49 units of affordable housing proposed for nine stories at 2072 Massachusetts Ave., North Cambridge, near Porter Square, replacing the one-story, freestanding Darul Kabab restaurant between an open-air, resident-only parking lot owned by the city and the Cambridge Housing Authority’s Leonard J. Russell Apartments. While it’s hard to argue with Cambridge’s need for more housing, especially affordable, a group called the North Walden Neighbors says the address’ intersection is already dangerous – and the area often clogged with traffic – and not the safest place to put 200 more residents. Neighbors point out that there’s been no traffic study certified by the city. (Cambridge Day wrote about this in September.) Televised and watchable by Zoom video conferencing.

School Committee School Climate Subcommittee, 5 to 6:30 p.m. Wednesday. A remote learning inspired policy passed in June by the School Committee calling for weekly check-ins with elementary school students needs some tweaking, educators have said. Prioritizing certain students and customizing the schedule as needed are among the options in this presentation. Watchable by Zoom video conferencing.