Notion of closing Central Square to car traffic, driven by business, gets a strong council vote 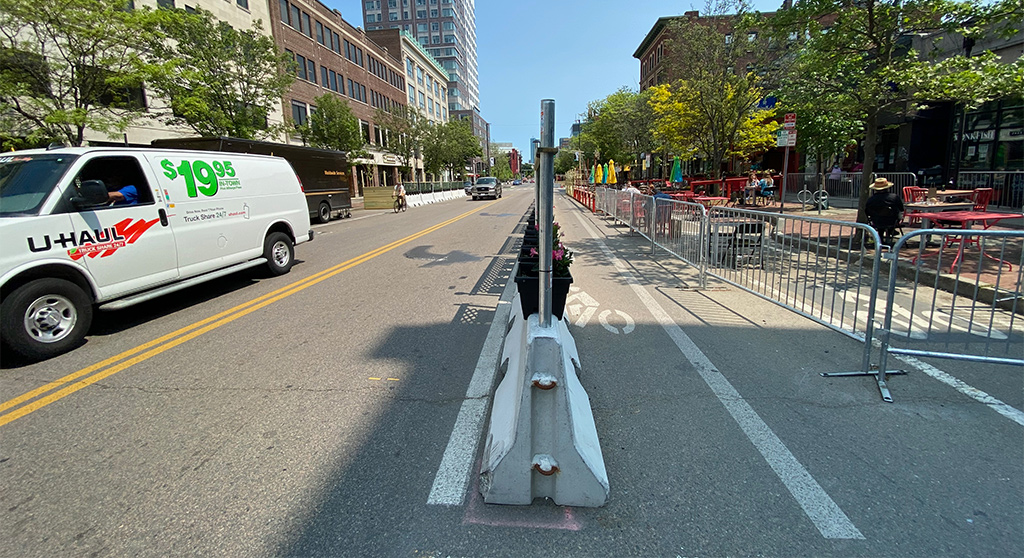 Notion of closing Central Square to car traffic, driven by business, gets a strong council vote

Outside dining areas have closed off half of Central Square in parts, and a City Council order could stop car traffic entirely on weekend nights through September. (Photo: Marc Levy)

Massachusetts Avenue could close to car traffic in Central Square on weekend nights through September, based on a City Council proposal that passed in an 8-0-1 vote on Monday.

The order by councillor Marc McGovern asks City Manager Louis A. DePasquale to work with the Central Square Business Improvement District and MBTA to devise a plan to shut down Massachusetts Avenue between Prospect and Sydney streets from 7 p.m. to 1 a.m. Fridays and Saturdays.

The motion shares similarities with a previous proposal to shut down part of Central Square. “We talked about blocking off the square to make it like a plaza on Sundays, to encourage people to walk, to mingle, to browse and to enjoy the businesses that were on the ground floor. So this is a step toward that,” councillor E. Denise Simmons said at the meeting. A June motion by Simmons was passed unanimously by councillors but not acted on by city staff.

A recent similar effort to limit car traffic in Harvard Square was scaled back dramatically in September after being raised for discussion in May 2020, part of an overall trend in which councillors proposed creative uses for streets during the coronavirus pandemic that deemphasized car travel, only to meet resistance from DePasquale and city staff. When it came to the Harvard Square proposal, the council wound up “watering it down because it didn’t have [language] about the city reaching out to the business community,” said councillor Jivan Sobrinho-Wheeler, its author, on Monday.

Quinton Zondervan had exercised his “charter right” to delay the Central Square motion at the May 10 council meeting, and one week later became the only councillor not to vote for the measure. (He voted present.) “I do find it a little bit curious that it’s really super focused on the businesses,” Zondervan said, “and really not focused at all on the residents.”

There was little discussion afterward of whether other stakeholders had been left out, or the implication that economic factors drove motions more effectively than residents’ quality of life: McGovern affirmed that his motion was supported by the Central Square Business Improvement District, and councillor Dennis Carlone suggested mildly that he didn’t think passage “prevents anybody from being involved.”

Other councillors generally expressed strong support for the order. Pointing out how busy Central Square’s outdoor dining tables had become in recent weeks, Tim Toomey called it “an opportune time for this policy order to be looked at right now.”

The Central Square BID also came in for praise for its role in making the area more of a destination, including those outside dining areas and its installation of Starlight Square and weekend Popportunity Markets. “I’ve watched Mike Monestime and his team over there at the BID do incredible work on a shoestring,” said councillor Alanna Mallon, referring to the organization’s executive director.

The motion now moves to DePasquale. Given Cambridge’s form of government, DePasquale will have final say over whether the order gets implemented. “If the city manager wants to do it, we’ll probably do it. If he doesn’t want to do it, we won’t,” Sobrinho-Wheeler shrugged.