So many festival screens to watch, led by IFFB; and reviews of ‘Escape From Mogadishu,’ more 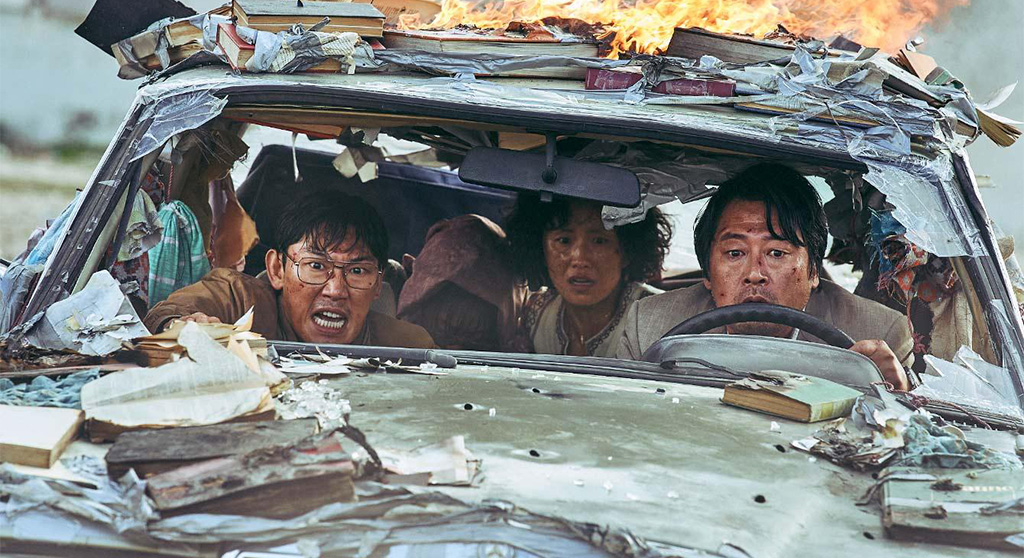 So many festival screens to watch, led by IFFB; and reviews of ‘Escape From Mogadishu,’ more

The Independent Film Festival Boston brings its Fall Focus program to the Brattle Theatre this week, with 11 highly anticipated independent and award-worthy entries. Wednesday brings “The French Dispatch,” Wes Anderson’s take on the golden days at The New Yorker. The phenomenal cast includes Adrien Brody, Benicio del Toro, Bill Murray, Frances McDormand, Tilda Swinton, Willem Dafoe, Jeffrey Wright and Léa Seydoux. Wright and Seydoux recently teamed up in the Bond flick “No Time to Die” and are quite excellent here, as is del Toro. On Thursday there’s “Red Rocket” from Sean Baker (“Tangerine,” “The Florida Project”) with Simon Rex playing an incarnation of himself as a washed-up porn star trying to navigate his dysfunctional latter years. Pablo Larraín’s “Spencer,” with Kristen Stewart taking on the role of Lady Di, is Friday. Larraín has plumbed the melancholy of famous females adroitly before, with “Jackie” (2016), so expect something more than just a simple biopic. Also on Friday is Kenneth Branagh’s “Belfast,” about a boy coming of age in the Northern Ireland city during the chaotic 1960s. On Saturday, the fest kicks into high gear with “Memoria,” a meditative drama by Apichatpong Weerasethakul (“Uncle Boonmee Who Can Recall His Past Lives”) starring Tilda Swinton as a Scottish woman on vacation in the Andes who begins to have strange sensory overload issues at night. Then there’s “Happening,” an adaptation of Annie Ernaux’s novel looking back on her experience with abortion when it was still illegal in France in the 1960s, and “The Worst Person in the World,” a portrait of a young Norwegian woman (Renate Reinsve) as she navigates drama in her relationships and a slow-to-form career. And finally old pal Bobcat Goldthwait serves up his road trip documentary “Joy Ride,” in which he and fellow comedian (and on-and-off friend) Dana Gould take a roll through the American South, recounting their pasts, personal conflicts (between the two), a near-fatal car accident and their time on the comedy circuit. Many of the screenings are area premieres, and some will have Q&As after the screenings. The IFFB and Brattle websites have details and tickets.

The GlobeDocs Film Festival winds down this weekend at The Brattle with three diverse features Sunday: “Jagged,” Alison Klayman’s rewind to 1995, when 21 year-old Alanis Morissette and her album “Jagged Little Pill” became the voice of female empowerment; Danish filmmaker Jonas Poher Rasmussen’s “Flee” about a child refugee from Afghanistan; and the closing-night entry, “Bernstein’s Wall,” Douglas Tirola’s look at the legendary composer’s life and struggle with his sexual identity. Filmmakers will attend Q&As after the screening of their film. Many of the fest films are also available for virtual screenings. GlobeDocs has access and information.

There’s more docs on Monday as The DocYard screens “Far From Afghanistan,” a compendium by five American filmmakers (including Boston-based documentarian John Gianvito, whose works have been the focus of the DocYard’s fall programming) chronicling the toll the war in Afghanistan has had on the people there and here. The project, inspired by the 1967 effort “Far from Vietnam” led by Chris Marker (“La Jetée,” the basis for “12 Monkeys”), perfectly marks yet another example of Gianvito’s commitment to the cinema of resistance and delivering counter-mainstream perspectives from the streets to the screen. The screening also marks the 20th anniversary of the U.S.-led war, the recent American pullout and the fall of Kabul. Proceeds from the screening benefit the Community Supported Film’s Fund for Afghan Evacuation and Resettlement.

If experimental cinema is your thing, on Tuesday the Revolutions Per Minute Festival showcases the works of feminist filmmaker and pioneer of queer cinema Barbara Hammer, who passed away in 2019. Curated by University of Massachusetts, Boston, cinema studies professor Sarah Keller, the evening’s slate lists six shorts made by Hammer in the 1970s and 1980s on 16 mm film. The subjects range from personal (“Psychosynthesis”) to philosophical (“Vital Signs”) and the LGBTQ lens (“Double Strength”). They screen at The Brattle.

Ridley Scott’s “Black Hawk Down” (2001) grimly captured the harrowing ordeal of U.S. soldiers entangled in the 1990s Somalian civil war; here Korean action director Seung-wan Ryoo (“Crying Fist,” “The City of Violence”) comes at the bloody conflict from a very different foreign perspective, as we embed with a group of South Korean diplomats on a mission to garner better relations with African countries. Initially their biggest obstacles are the hired guns the North Koreans send to waylay them on way to diplomatic meetings, but when the violent siege of Mogadishu erupts, the South Koreans are forced to throw in with the North Koreans in a desperate attempt to escape. Some of the early political seeding may be a bit of a slow roll, but once the match is lit, the action and chase sequences impress, not just from a standpoint of Ryoo’s big-scale staging and sets, but in their clean, fluent choreography. On Apple TV+, Amazon Prime Video and more on Tuesday.

David Gordon Green has had an intriguing career behind the lens, from his humble indie roots (“George Washington”) to the high times hit “Pineapple Express” (2008) and even the intimate Boston Marathon bombing chronicle of Jeff Bauman’s traumatic recovery in “Stronger” (2017). Since returning to John Carpenter’s 1978 horror classic “Halloween” in 2018, he’s been on a binge of horror reboots, with “The Exorcist,” a “Hellraiser” television series and the end of a “Halloween” trilogy, “Halloween Ends” coming. This middle film, “Kills,” just like that 2018 retool, is totally unnecessary, inane and does little to further the series. It’s a check cash that gets Jamie Lee Curtis back in the mix and adds Anthony Michael Hall (“Sixteen Candles,” “Breakfast Club”) as Tommy, the young boy saved by Curtis’ hero in the original, now an adult and rallying a mob to hunt down Michael Meyers, the inhuman psychopath sporting a pre-Blue Origin flight Bill Shatner mask and tagged as “the boogeyman.” “Evil dies tonight!” the crowd chants, as if were an eighth-inning cheer at Fenway. Sillier still, no one seems to care when more people die and the police are nowhere to be seen, though there is a fire response team that gets hacked up before they can douse an inferno. It’s lazy, predictable and hollow. Myers should call his agent and get his own series on Netflix or Prime. At Apple Cinemas Cambridge, 168 Alewife Brook Parkway, Cambridge Highlands near Alewife and Fresh Pond, and AMC Assembly Row 12, 395 Artisan Way, Assembly Square, Somerville.

Peruvian director Claudia Llosa seems to craft her films upon along the blurred lines between waking reality and feathery other realms. That was so with “Aloft” (2014) and there’s more of the same here. Based on Samanta Schweblin’s 2014 book, “Fever Dream” is something of a psychological thriller told in febrile wisps and driven by a looming sense of dread and bad intent. Did I mention it’s also about the ills of pollution and humans as bad shepherds of the environment? The film focuses on two mothers, Amanda (María Valverde) and Carola (Dolores Fonzi), the effects of the pesticides in the water of the bucolic Argentinian enclave they met in and a holistic healing ritual to treat the poisonings. One such visit to the local priestess transforms Carola’s son, David (Emilio Vodanovich and Marcelo Michinaux play him at different ages), into something of a Damien-lite hellspawn. Carola’s nonchalant attitude about her son’s condition and the child’s prophetic insights, either whispered into Amanda’s ear or in narrative voiceover, bear an eerie chill. The nonlinear structure works to the film’s advantage, but at times the dank, heavy moodiness becomes postured and distractingly overwrought. On Netflix.

Fans of the iconic ’60s band launched by Andy Warhol and famous for its male toxicity and fuck-you attitude will relish this nostalgic rewind, which is pretty much a straight-up chronology of the band’s avant-garde inception, early challenges, chart-topping highs and inevitable demise. It’s directed by Todd Haynes, who’s proven to know a thing about rock ’n’ roll with grand fictitious spins on Bob Dylan (“I’m Not There”) and David Bowie (“Velvet Goldmine”). Many of the talking heads are surviving band members, namely John Cale and drummer “Mo” Maureen Tucker, who tagged the skins standing up and with mallets instead of sticks. The Boston bonus here is Jonathan Richman, frontman of the Modern Lovers (“Roadrunner”), who was an adoring fan and ultimately became an intimate friend. Iconic frontman Lou Reed, all vinegar and sneer, passed away nearly a decade ago, so we get him only in archival footage. As the film has it, his charisma made moths out of those around him. Fellini-famous actress Nico, who had a stint with the band (“I’ll Be Your Mirror”), and Warhol were intoxicated by his brash confidence, as were the band’s fans. It became something of a weapon when clashing with Cale over creative differences. At Kendall Square and streaming on Apple TV.