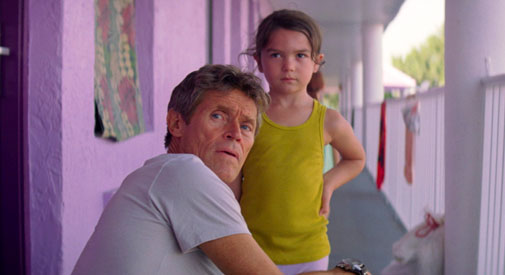 Two years ago, wunderkind Sean Baker blew away audiences with “Tangerine,” a film that cut into deep new territory – not so much in that it featured transgendered heroines on a quest to bust one of their men for fooling around with another, as the narrative succeeded loftily on many levels, but because it was shot on an iPhone, making it both a throwback and cutting edge. Filmed on the passively seedy streets of Los Angeles and drenched in orange and yellow, it was a scrumptious feast to drink in, not to mention being deftly humorous, moving and a bellwether for aspiring filmmakers. 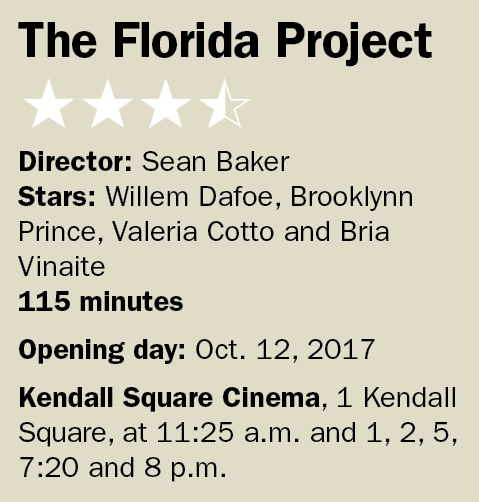 It was also a promise of what might come next, and that’s here: “The Florida Project.” Something of a minor miracle and, so far, one of the best films of 2017 (joining “Get Out” on that short list), this is a beacon of hope for the future of independent film as Harvey Weinstein sinks into an abyss of shame and disgrace. Baker trades one sunshine locale (California) for another (Orlando, Fla.) while still hanging out with affable strugglers on the low who can’t get out of their own way. The film begins with two 6-year-olds spitting on a woman’s car from the balcony of a purple motel. When confronted, the pair offer four-letter retorts and buzz off, laughing gleefully. “Where is their moral compass?” You might ask. Have they escaped the cellular confines of “The 400 Blows” or “Salaam Bombay”?

We eventually catch up to the mother of one girl, a surly coil of a young woman by the name of Halley (Bria Vinaite), a scammer you root for mostly because she’s trying to be a good mom, but doesn’t really know how. With resolve and rue she provides, despite temptation to slack off with a sugar daddy or hole up in the kind of squalid drug den Baker cooked up in “Tangerine.” When all is tallied, her maternal instincts register stronger and more palpably then most moms that have graced the big screen so far this year, including Antiope in “Wonder Woman,” but then again , Diana could take care of herself.

How the film progresses is mostly sideways, with a precipice of total ruin edging into every frame. The children, as we learn early on, while products of flophouse culture, aren’t so much victims as they are accomplices or even chief perpetrators. It’s a piquant paradox Baker has cooked up: the ever innocent, always in trouble and knowing too much beyond their years, all unfurling in happy-go-lucky strokes driven by conflict and failure within the long shadow of Disney World – the Eden of childhood, so close and yet so far away. Drugs and sex factor in carefully meted doses that increase accordingly, and throughout it all Willem Dafoe’s ever-observant super, Bobby, looms, his presence resonating even when not on screen. The relatively unknown Vinaite, who will find great opportunity after her bold turn here, is the driving force of the film, but it’s DaFoe’s Bobby that provides the soulful anchor. He’s the motel’s de facto shepherd of the down-on-their-luck flock and possess a deep empathy for Halley and her daughter (Moonee, played with the perfect amount of incorrigible sass by Brooklynn Prince).

One surprising thing about “The Florida Project” is how rife it is with hope, even as it’s weighed down by the hapless, unsustainable situation of its protagonists. The film moves so slowly and purposefully with care that you wonder – like with the Safdies’ sad-sack crime flick “Good Time” – how it will all end, especially after the solidarity of sisterhood is shattered by a nasty beatdown. The denouement is heartbreak-worthy, though I’m not so sure I agree with the wrap-up. Some may find it soaringly apt, though, and perhaps that’s what Baker is angling for, an emotional journey that tests our morals and values as well as our sense of humanity and qualifications for happiness. It’s a brave new world Baker is blazing. I can’t wait to see what comes next.