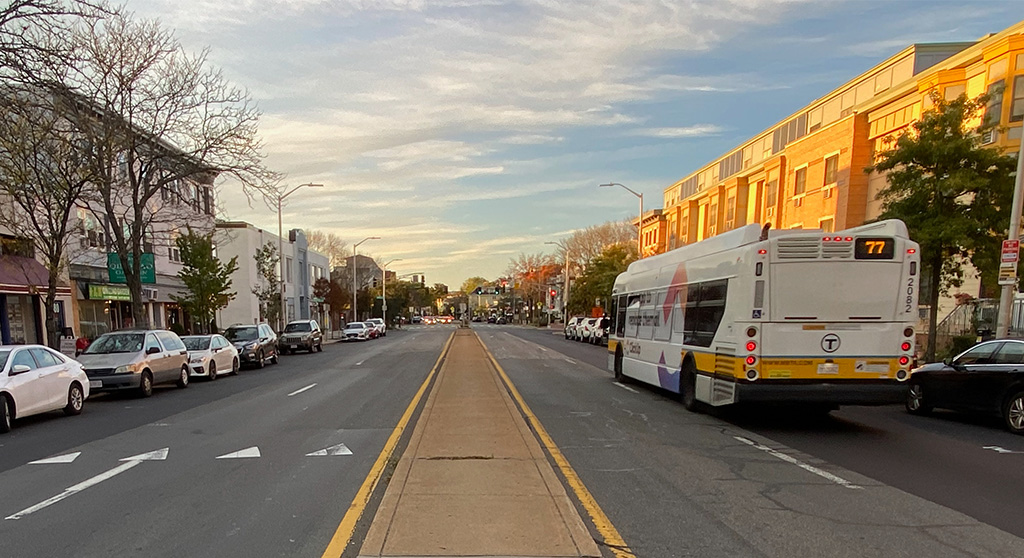 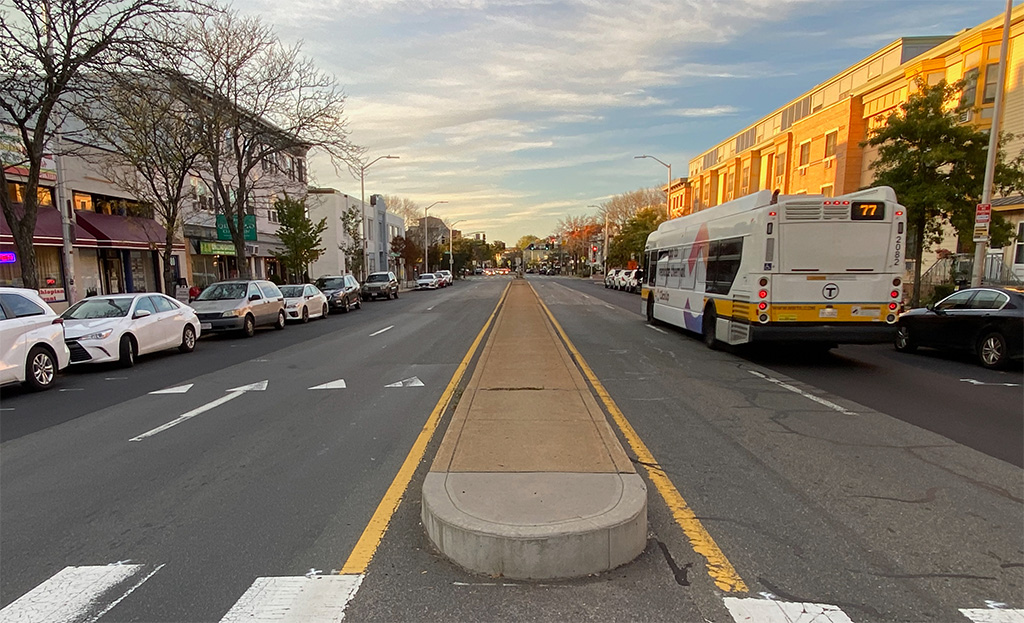 A stretch of Massachusetts Avenue in North Cambridge, from Dudley Street to Alewife Brook Parkway, is slated for bike and bus lane installation. (Photo: Marc Levy)

Hearing increased debate and concern about plans to install protected bike lanes and dedicated bus lanes in North Cambridge, City Manager Louis DePasquale announced last week that an additional community meeting would be held from 6 to 8 p.m. Thursday to unveil the final design.

City  Council meetings have reflected the political climate, with councillors generally agreeing last week that the additional community meeting was a positive development. Some expressed concern about potential delays in installing the bike lanes. “We’re getting almost daily reports of crashes between motor vehicles and bicycles; we’re just playing Russian roulette with the lives of our constituents,” councillor Quinton Zondervan said at the Monday meeting.

Vice mayor Alanna Mallon took to Twitter on Friday to highlight those private messages to city councillors about bicycle crashes and traffic incidents; a policy order submitted by Mallon and councillor Jivan Sobrinho-Wheeler for this Monday’s meeting would make public what it calls “largely invisible” reports.

“When people say ‘These bike lanes aren’t urgent, what’s the rush?’ I invite them to receive these emails every day and feel that sick sense of dread when another one pops in the in-box,” Mallon tweeted after at least two bike crashes over a three-day span that involved a motor vehicle and resulted in the driver being cited. “We must act with urgency. Lives are depending on it.”

The tension has spilled over into the past weeks of campaigning for City Council, with the Cambridge Bicycle Safety group promoting a slate of 13 candidates who have signed its pledge to support cycling infrastructure and installation timelines, while upstart group Save Mass Ave encouraged voters to cast their ballots for candidates who “will work to promote public safety while supporting businesses.” Incumbent Patricia Nolan appears on lists circulated by both groups.

The major point of contention centers around city plans for the section of Massachusetts Avenue between Alewife Brook Parkway and Dudley Street. The final design calls for the addition of separated bicycle lanes in both directions, a dedicated bus lane northbound and a rush-hour bus lane southbound that turns into a 15-minute loading zone between 9 a.m. and 10 p.m., according to an Oct. 13 email from Andreas Wolfe, the project manager. Earlier plans included only the southbound bus lane but left open an option for modifications northbound pending a discussion with the MBTA. The plan acknowledges a net loss of 21 metered parking spaces but points to the loading zone as an alternative option for quick trips.

The changes are required by the city’s Cycling Safety Ordinance. At a first community meeting on Sept. 14, Wolfe said the goal is to complete the stretch in November “before the winter kicks in, when we’re not able to [apply] lane markings because of the weather.”

The installation of bike infrastructure has always brought out a range of opinions, but debate in recent months felt collegial. A “Mass Ave for All” meeting in May brought together Porter Square Neighbors Association representatives, businesses such as The Abbey, Guitar Stop and Ward Maps, and Cambridge Bicycle Safety to advocate for changes to plans for other sections of Massachusetts Avenue.

That coalition appears to have broken down “despite the fact we were all working together and had a meeting with the city together,” said Nate Fillmore, a member of Cambridge Bike Safety, during a Tuesday call.

In that working group’s absence, a range of claims are being made in public, some about the section of Massachusetts Avenue in North Cambridge under review now and others about the cycling ordinance in general. There’s been a “proliferation of alternative facts” that conflate the city’s ideas for different sections of Massachusetts Avenue, Fillmore said.

The Cycling Safety Ordinance, amended by the City Council a year ago this month, is specific in how it addresses each subsection of Massachusetts Avenue. City staff reported in June that plans for the trickiest sections – the so-called MassAve4 – would not be available in draft form until mid-2022, signaling that construction might not begin for years. The heat of the debate is shown in claims such as those published by Violette Bakers on Oct. 11 suggesting that the ordinance “requires the removal of most of the parking on Mass. Ave.” and that some city councillors “support Cambridge as a car-free city.”

Through all the debate, the section of Massachusetts Avenue between Dudley Street and Alewife Brook Parkway appears on track to be completed before the winter. Those interested in remotely attending the second community meeting Thursday can sign up here and view general updates to the project here.

“There has been lots of debate back and forth, and mostly what people wanted was to make sure their voices were heard,” Nolan said.

This post was updated Oct. 25, 2021, to clarify that a city meeting notice says residents will have a chance “to ask questions about the plan”; previous language referred to getting input from residents.