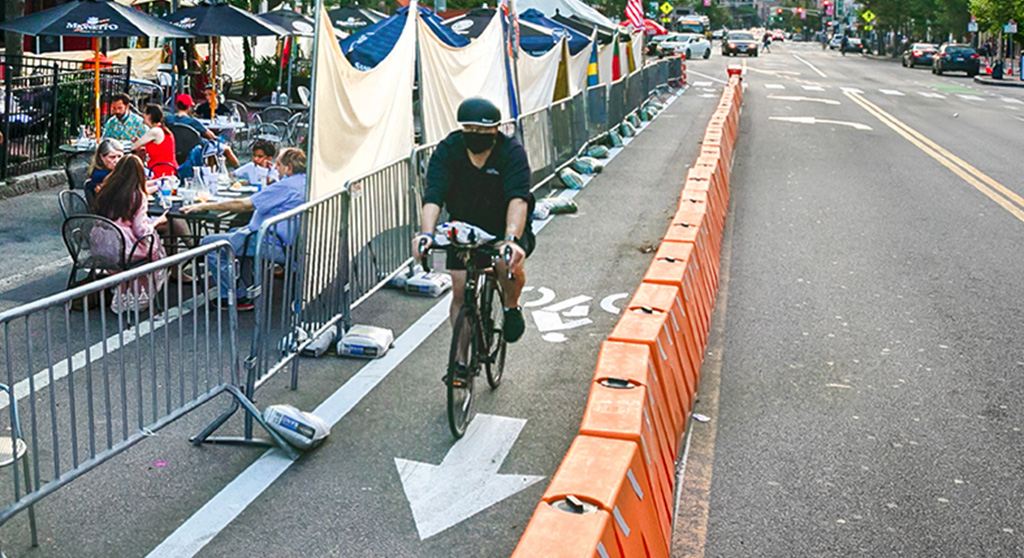 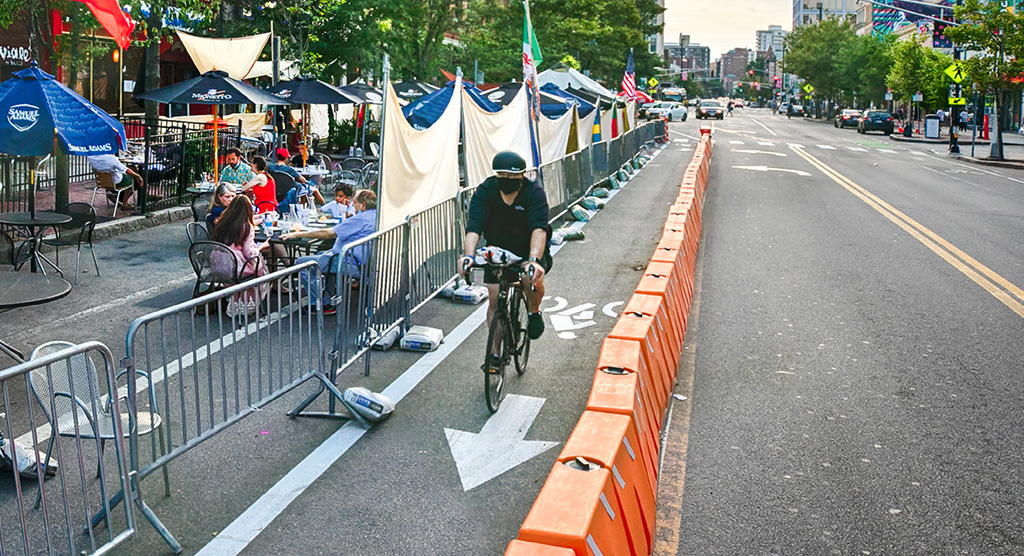 A springtime study about bike lanes replacing on-street parking continues to send out shock waves, and is now playing a role in November’s elections.

Citizens groups have been formed, petitions are circulating and candidates are getting endorsements around the MassAve4 Impact Analysis report and other issues relating to the city’s Cycling Safety Ordinance. Passed by the City Council in 2019 and updated in October 2020, it calls for around 25 miles of protected bike lanes to be installed throughout Cambridge within five to seven years.

When released in April, the MassAve4 report triggered panic among business owners and residents who feared that nearly all on-street parking spaces would be removed in favor of quick-build protected bike lanes along Massachusetts Avenue from Harvard Square to Dudley Street, including Porter Square. The city quickly assured that it was only studying the effects of achieving the ordinance’s goals with quick-build options such as flex posts, signs and road markings rather than curb cuts, sidewalk and road surface alterations that would demand more planning, cost and resources and be less likely to meet the law’s timeline.

The city has not released a plan, but by May the city manager expects to identify where quick-build bike lanes will work and get City Council approval for a timeline on installing other kinds of bike infrastructure, according to the MassAve4 project page. Outreach and community engagement will be part of the process. If the city fails to have a plan approved in 2023, quick-build lanes along the corridor will be mandated by the ordinance.

In the interim, the Porter Square Neighborhood Association, several businesses along the corridor – The Abbey, Guitar Stop and Ward Maps among them – and the Cambridge Bicycle Safety Group have banded together to form the Mass Ave. 4 All group, which is sponsoring a petition to reject the impact analysis report and to urge the city to try again on reimagining Massachusetts Avenue. Members have posted alternative design suggestions on the site and encouraged residents to contact City Council members and project planners.

Cambridge Bicycle Safety pushed for the ordinance but found the MassAve4 report troubling.

“Our vision is for there to be continuous protected bicycle lanes for the full length of Massachusetts Avenue,” member Nathanael Fillmore said, “as well as improvements to ensure efficient and reliable bus service, a safe environment for pedestrians, a thriving business corridor and a pleasant and welcoming place for all residents to spend time.” 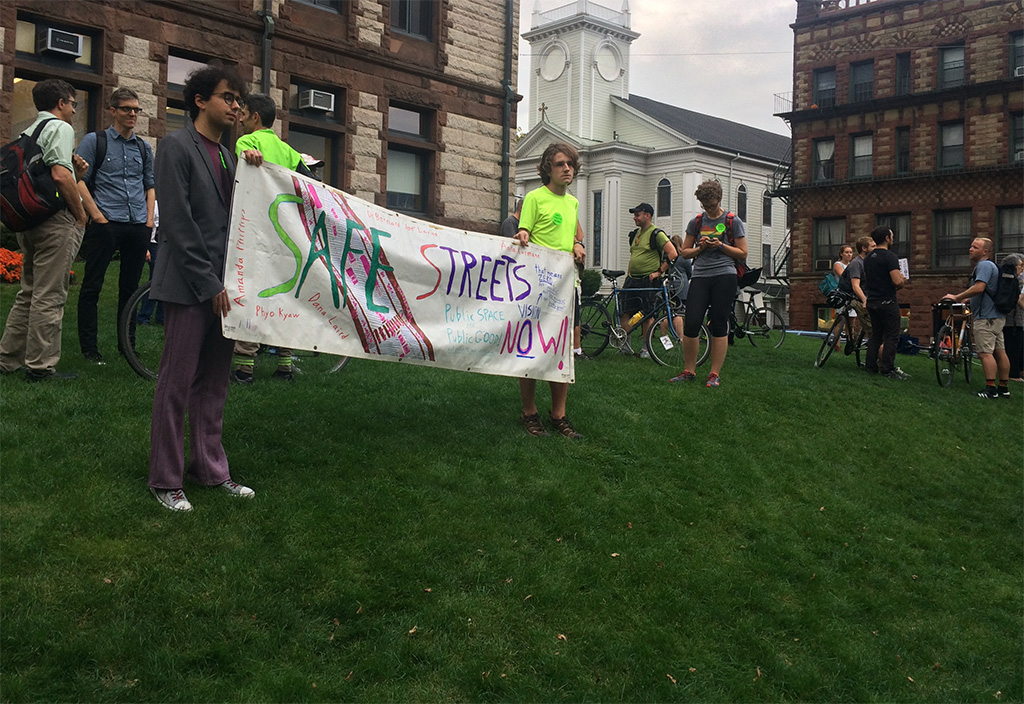 Bicyclists rally for safe infrastructure at an Oct. 17, 2016, rally at City Hall, before the creation of a city Cycling Safety Ordinance. (Photo: Marc Levy)

Fillmore praised the city for its change of approach when kicking off the northernmost stage of the ordinance’s charge, with protected bike lanes from Dudley Street to the city’s border with Arlington at the Alewife Brook Parkway. For that, the city did not issue an impact report, but held an online community meeting to share designs concepts – which also showed a majority of on-street parking being eliminated, but with 15-minute pickup and loading zones during certain hours within a bus lane; and with metered parking moved to side streets in key locations. Before the Sept. 14 presentation, the city reached out to businesses along the stretch to get their input and hear concerns.

Andreas Wolfe, the city’s street design project manager, said Friday that “targeted outreach is taking place as part of the Dudley Street-to-Alewife Brook Parkway section for businesses along that section,” and Porter Square outreach would follow before that project takes place. The stretch from Dudley Street to Alewife Brook Parkway will be complete before the MassAve4 project, because it is entirely quick build and there are no overhead catenary wires powering buses to contend with.

Some felt the process is inadequate. “As a business owner that will be directly affected by this rushed and poorly planned project to install much-needed protected bike lanes, I was never given a real voice,” said Robert Harris, owner of the Season to Taste restaurant at 2447 Massachusetts Ave. “Instead there was a virtual meeting to talk about thoughts and feelings, with 99 percent of the decisions already made, which only highlights the flawed process for this project.”

In the wake of that meeting, the group Save Mass Ave formed and launched a website with materials that tout the approach taken by Mass Ave. 4 All but also promotes candidate for City Council who have not signed onto a Cambridge Bicycle Safety pledge to support the Cycling Safety Ordinance. That includes one incumbent, E. Denise Simmons, and several challengers for council seats.

Save Mass Ave also has its own petition calling for “meaningful engagement and planning with all stakeholders.”

“There are several petitions,” said Ruth Ryals, president of the Porter Square Neighbors Association, referring to the groups’ overlapping online and paper versions. “It is messy.”

On the social media site Nextdoor, some North Cambridge residents and others unhappy about the loss of parking and a process say they feel they don’t have a voice, while bike advocates such as CBS leverage their power disproportionately to control and influence elections and policy. Boston area cycling advocacy groups such as the Boston Cyclist Union promote and canvass for city council members and candidates who support bike safety policy and bike infrastructure as a priority.

This isn’t the first time the rollout of bike lanes has been contentious. Back in 2017 there was pushback from businesses and residents on Cambridge Street to the installation of protected bike lanes that took away some on-street parking. Though the city says businesses have come through bike changes fine in Harvard and Central squares, some have seen big drop-offs in walk-in traffic resulting from a lack of parking, said Guitar Stop’s Jeanne Oster at a Wednesday meeting of the North Cambridge Stabilization Committee.

The data can be confusing, though. City surveys show that in Porter Square, for example, the No. 1 item businesses said would help them was more parking, while 62 percent of respondents said they came to shop in the area by foot, with biking accounting for another 19 percent and the MBTA for 16 percent. Motor vehicles checked in at 33 percent.

And for all the infrastructure already rolled out, outdoor dining spaces on Massachusetts Avenue have been retained in their entirety, Fillmore pointed out.

The pledge, which has been signed by seven councillors running for reelection and six council challengers, “is important to ensure continued implementation of the ordinance on schedule and without delay that will lead to further injuries or deaths,” Fillmore said.

“Certainly the bike pledge has an impact [politically], particularly among the challengers who have to decide publicly which side they’re on – we already know where the incumbents stand,” said councillor Quinton Zondervan, a signer of the pledge.

But it can be difficult to draw lines around politicians’ policies. In addition to first-time candidate Tonia Hicks appearing on both of the new groups’ lists, there are candidates such as Paul Toner – who did not sign the pledge but is not opposed to bike lanes or the ordinance’s overall goal of separated bike lanes and safety for all. “I agree with the goals of the Cambridge Cycling Safety Ordinance,” he said in an email, “I believe there needs to be flexibility on the construction timeline in order to gather input from relevant stakeholders, such as neighborhood residents and businesses.”

Zondervan thinks there is going to be a natural shift away from trips by single drivers with the arrival of autonomous vehicles and microtransit options such as Bluebikes and electric scooters. “Just as we’ve always said,” Zondervan said, “if you build it, they will come. As we make it safer and easier for people to bike instead of drive, more and more people will choose to do that, and that’s exactly what we need. Also exciting about Massachusetts Avenue in front of City Hall is the clearly marked bus stop lane. It’s exciting to see us prioritize not just bike lanes but also bus lanes. We’re really heading in the right direction prioritizing public transit over private vehicle transport, and I’m just really happy about that and look forward to more to come.”