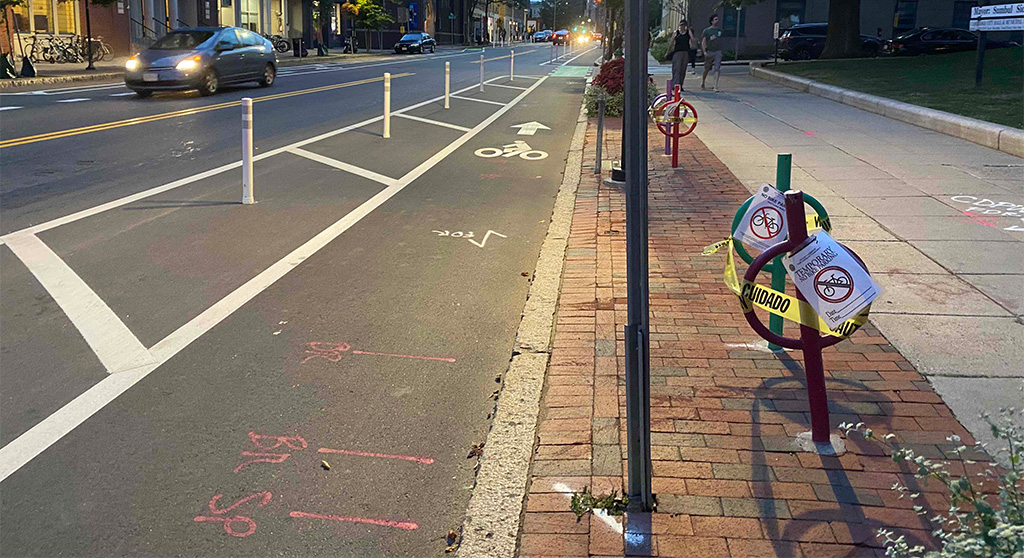 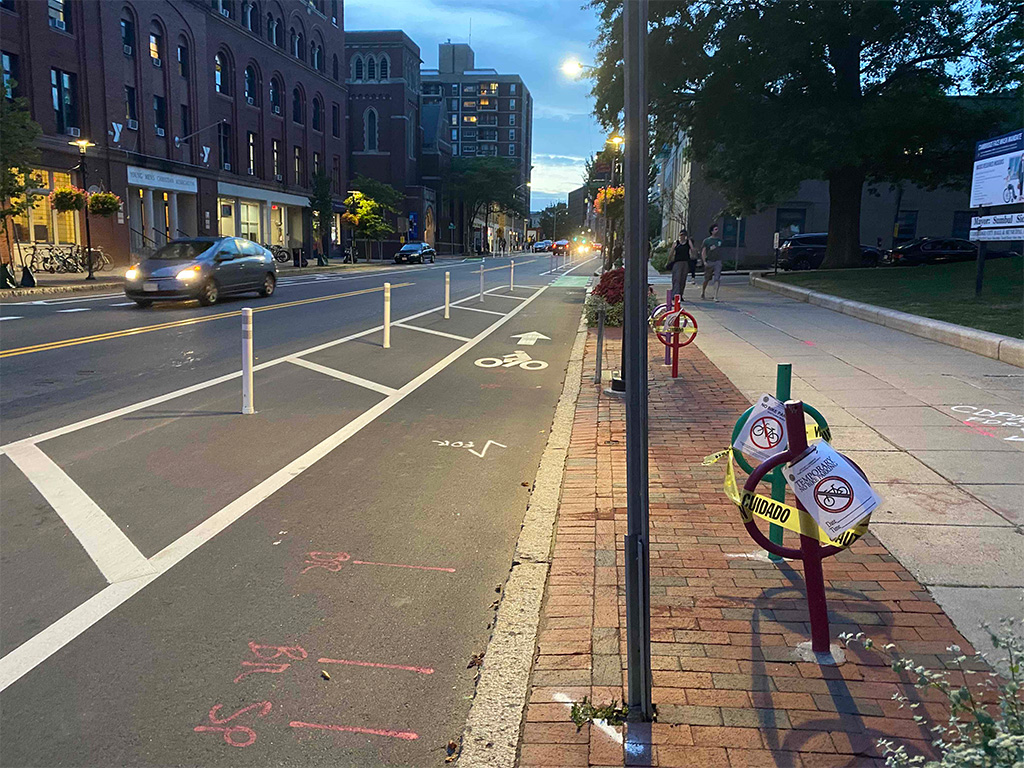 After facing supply chain delays, the city completed protected bike lanes on Massachusetts Avenue between Inman and Trowbridge streets in Mid-Cambridge last week, bringing the city a step closer to meeting the goals laid out by its updated Cycling Safety Ordinance. Alongside these changes, the city announced its intention to install bike and bus lanes by November in North Cambridge, on Massachusetts Avenue between Dudley Street and Alewife Brook Parkway.

The ordinance sets a deadline for installation of separated bike lanes along these stretches of Massachusetts Avenue by April 30, part of 22.6 miles of separated bike lanes to be built by 2026. Due to the compressed timeline for these stretches, the city chose to use quick-build methods – usually consisting of repainting the street and installing flex posts, without requiring digging or major construction.

Massachusetts Avenue in North Cambridge is expected to see a changed lane configuration.

Detailed plans for the stretch from Alewife Brook Parkway to Dudley Street, where the Greek Corner restaurant operates, were released at a public comment meeting Sept. 14. The plans include the conversion of metered parking into protected bike lanes in both directions and the elimination of a car lane in favor of a bus lane headed toward Porter Square. While existing metered parking along the stretch will be removed, the plans call for a “temporal” bus lane, which will be used as a 15-minute loading zone during off-peak hours.

The loading zone designation extends to anyone driving a vehicle, beyond the traditional connotation limiting such areas to just delivery trucks and ride sharing. “After certain hours, say 9 a.m., folks can use that space to conduct loading; they can legally stop their car there,” Andreas Wolfe, the project manager, said at the public meeting.

Turn for the better? 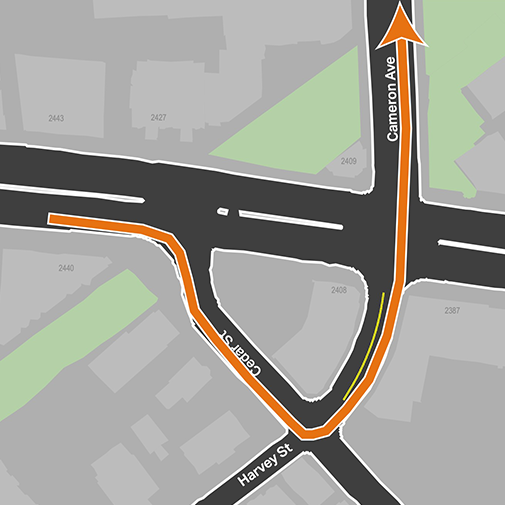 A city image shows an expected change in traffic patterns along Massachusetts Avenue in North Cambridge, eliminating a direct left onto Cameron Avenue.

In addition to making the stretch safer for cyclists and more efficient for buses, the design changes the experience for car traffic. Notably, the project will install a left turn lane at Churchill Avenue, the site of the Jack’s gas station, and include a new traffic flow for left turns onto Cameron Avenue before the Mediterranean Grill – instead of turning onto Cameron directly, drivers would take a right onto Cedar; a left up Harvey Street would set them up to cross Massachusetts Avenue. Patrick Baxter, an engineer for the city’s Traffic, Parking & Transportation Department, presented findings from a study that suggested the changes will add one minute of travel time in the direction of Porter Square due to the inclusion of a dedicated bus lane.

Public comments at the meeting were largely supportive of the design, with questions clustered around the implementation of the dedicated bus lanes and loss of parking spaces. In addition to allowing for 15-minute parking and loading in the bus lane, the city pointed to side streets getting new metered parking. We “expect that we will be installing additional metered parking on side streets to make up for some of the loss,” said Joseph Barr, director of the city’s Traffic, Parking & Transportation Department, in an interview May 12.

While the design is largely final, the city acknowledged that adding another dedicated bus lane in the direction of Arlington is a possibility. It would serve peak commute times in the evening for commuters leaving the city. “We’re still in talks with the MBTA to see what serves their operations the best,” Wolfe said.

Bike advocates were enthused by the news about both stretches of Massachusetts Avenue. “Loving to see this plan here. It’s a scary place to bike, and this will make it a much more pleasant experience for all ages and abilities,” said one public commenter.

Nate Fillmore, of the Cambridge Bicycle Safety Group, called it “a good plan [and] a creative plan” in an interview Monday. “It is important to note that the plan actually preserves the substantial majority of parking on the inbound side of the street, except it is converted to short-term parking for the majority of the day, where anyone can park for up to 15 minutes.”

The city’s goal is to complete the project by November. “That gives us a chance to do it before the winter kicks in when we’re not able to lane markings because of the weather,” Wolfe said. Information is here.