Surreal ‘Titane’ tops releases, ‘Apex’ is lowest; The Brattle’s ‘Noir-vember’ is most seductive 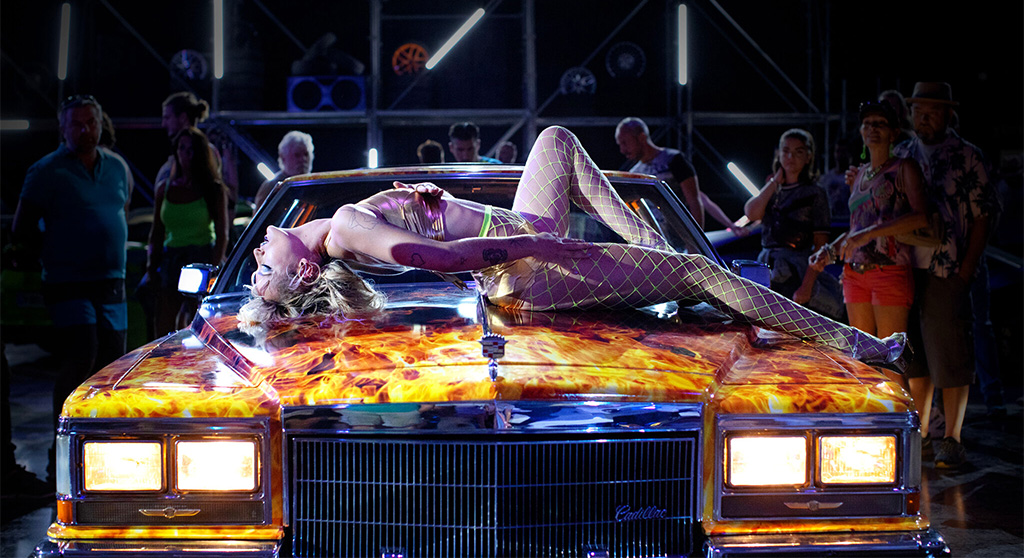 Surreal ‘Titane’ tops releases, ‘Apex’ is lowest; The Brattle’s ‘Noir-vember’ is most seductive

The Brattle continues its “Noir-vember” (all films made in the year 1946!) program with “Green for Danger” with “The Stranger,” Orson Welles’ war crimes jaunt in Connecticut, on Sunday; “The Locket,” “Black Angel” and “So Dark the Night” on Monday; and on Tuesday, “The Verdict,” Don Siegel’s debut feature film after the 1945 documentary short, “Hitler Lives.” Siegel would go on to make “Invasion of the Body Snatchers” (1956), “Dirty Harry” (1971) and “Escape from Alcatraz” (1979). On Wednesday it’s the classic murderous love triangle noir “The Postman Always Rings Twice,” starring John Garfield and Lana Turner. Closing out the program on Thanksgiving Thursday it’s the genre-defining “The Big Sleep” with Bogie and Bacall in one of their four famous pairings, direction from Howard Hawks and a screen credit from William Faulkner from Raymond Chandler’s pulp material. For after-dinner cinematic dessert there’s “The Blue Dahlia” starring Alan Ladd and Veronica Lake in a weave of lies, affairs and a classic frame-up.

Friday changes things up with the 1971 adaptation of Roald Dahl’s “Willy Wonka & the Chocolate Factory,” starring Gene Wilder as the impish pied piper of all thing candy (Dahl adapted the script of his book), and “Sweet Sweetback’s Baadasssss Song” (also 1971), a tribute to pioneering filmmaker Melvin Van Peebles, who died this fall. It’s a topical film, as it chronicles the path taken by a black man (Peebles) pushed too far by a pair of racist cops. Both films are three-day runs. Friday also begins the area premiere run of Alex Camilleri’s “Luzzu,” about a Maltese fisherman (Jesmark Scicluna) in a quandary to repair his leaking boat, a luzzu that has been in the family for generations, or decommission it, get a payout and do black market work to support his family. Scicluna won the audience award at Sundance for his performance.

A surreal and thoroughly haunting psycho-horror that goes to places few would expect and is definitely not going to be everyone’s cup of tea. Alexia (Agathe Rousselle, brilliant in her first major role) has a massive metal plate in her head (and a nasty scar) from a car accident as a child. As a young woman she lives at home with her parents while working as an erotic dancer at an auto show club and spends her spare time adding to her totals as a serial killer. Her means of dispatch are brutal and to the point – she’ll even clean out a whole house with just a hairpin and a bar stool. The film morphs some as Alexia, looking to evade the police, poses as the long-lost son of a fire chief (Vincent Lindon). Director Julia Ducournau, who notched the Palme d’Or at Cannes for the film, has been down the road of bloody and weird before with her 2016 debut “Raw” (about a young woman with cannibalistic urges). She pushes the envelope more here, dipping her toe into an outré artiness that bears the same strange edge as “Annette” (2021) or, say, “Neon Demon” (2016). After all, there is sex with a vintage Cadillac and no muffler to prevent pregnancy. For rent or purchase on Apple TV+, Google Play and other services.

The title refers to the top of the food chain, as in “Apex Predator” (the film’s original title), and a bunch of wealthy CEOs who come to an island run by an artificial intelligence that enforces the rules to trophy hunt dangerous humans – criminals, if you will. It’s essentially a cheap redux of the classic 1932 thriller “The Most Dangerous Game” starring Joel McCrea and Fay Wray or, more recently, “The Hunt” (2020), but otherwise not worthy of comparison to either. I’m not sure what director Edward Drake has on Bruce Willis, who stars; the two teamed up for the lackluster space quest “Cosmic Sin” this year, this dud and two more projects on the way (I can’t wait!). Here Willis’ Thomas Malone is supposed to be that lethal guy that all the Richie Riches want to add to their trophy CV, but all Malone does is cower behind trees and grimace as if enduring a bad case of constipation while he sizes up those stalking him. There’s nothin imposing or John McClane-like about him, and during it all he wears a blazing red jogging suit. Willis barely appears on screen with another actor, as if he shot his screens in a day and left. I’m not certain I’ve ever seen a more inert performance. It’s oceans away from Willis’ “Die Hard” salad days and likely the worst film of 2021. “Apex” should have been called “Nadir.” On AMC+ and available for rent or streaming on Apple TV+ and other services.

Abel Ferrara’s pandemic-era psychological thriller is one murky affair, not just in the grainy, hand-held camera footage, but in construct. It’s set sometime in the near future or, more aptly, a parallel, post-apocalyptic alternate reality where St. Peter’s Basilica gets blown up and an American operative named J.J. (played by Ethan Hawke) wanders the streets of Rome trying to make sense of it all (as we do too, and too much so). Along the way he gets squeezed between Russian intelligence handlers (mostly through Zoom sessions, with the spies sitting in cushy locales as they gleefully mock and mislead their weary American pawn), Chinese drug lords and religious conspiracy theories that might make Dan Brown (“The DaVinci Code,” “Angels and Demons”) smile. Hawke also plays J.J.’s twin brother, whom we see mostly locked away in a dim, subterranean cell and hopped up on smack. Ferrara, who delivered some fairly straight-up criminal fare (“King of New York” and “Bad Lieutenant,” to name two) seems a bit overwhelmed in his effort to juggle high concepts and a large scale on a small budget. It intrigues on a micro level, but those seeking to pull back and wanting more are likely to come away frustrated. On Amazon Prime Video.

Directors Julie Cohen and Betsy West, who tackled a strong, groundbreaking woman in their 2018 documentary “RGB,” profile another badass here: longtime Cambridge resident Julia Child, who shaped the way Americans eat, namely getting us away from TV dinners and toward healthy, home-cooked meals. Even ignoring food, Child is a captivating topic. as the doc dispels the myth of Child as a World War II era spy – she served in the OSS, the precursor to the CIA, but mostly in an administrative capacity. No matter: Child cut her path boldly during a time women were expected to be silent domestic shepherds, separating from the largesse of her wealthy and hyperconservative father and meeting a do-or-die ultimatum to make a French omelet live for her screen debut on the Public Broadcasting System’s WGBH. The film does a wonderful job of capturing Julia’s rich personality (affectionately skewered on “Saturday Night Live”) and love of food and cooking techniques, and as a time capsule reminding us how much mass-produced, preservative-filled junk we ate in the 1950s and ’60s. At Landmark Kendall Square Cinema, 355 Binney St., Kendall Square.

Halle Berry directs and stars in this female “Rocky”-esque saga about a washed-up former MMA fighter who finds her way back to the ring for one more shot and a new lease on life, including the ability to fully win back her young son. Clichés work the viewer’s sensibilities as Berry’s Jackie Justice, a 10-0 meteoric star at one time who now scrubs toilets and struggles with alcoholism, harassment and abuse from the men around her, including her boss and her live-in beau/manager. You can see Berry working hard to tap into the grit of her character and her situation, but there’s just too much packed in there for credibility – the title is more about the inner demons than blows landed, but how much can one person realistically be saddled with? Perhaps the film needed to breathe some. And maybe Berry being just the star and not the filmmaker could have yielded different results. That said, the big match with the reigning star Lady Killer (played by Valentina Shevchenko, a real and really imposing MMA fighter) is tautly choreographed and shot in an intimate, visceral style. You get into the fighters’ heads and feel their pain; it almost redeems the film. On Netflix starting Nov. 24.