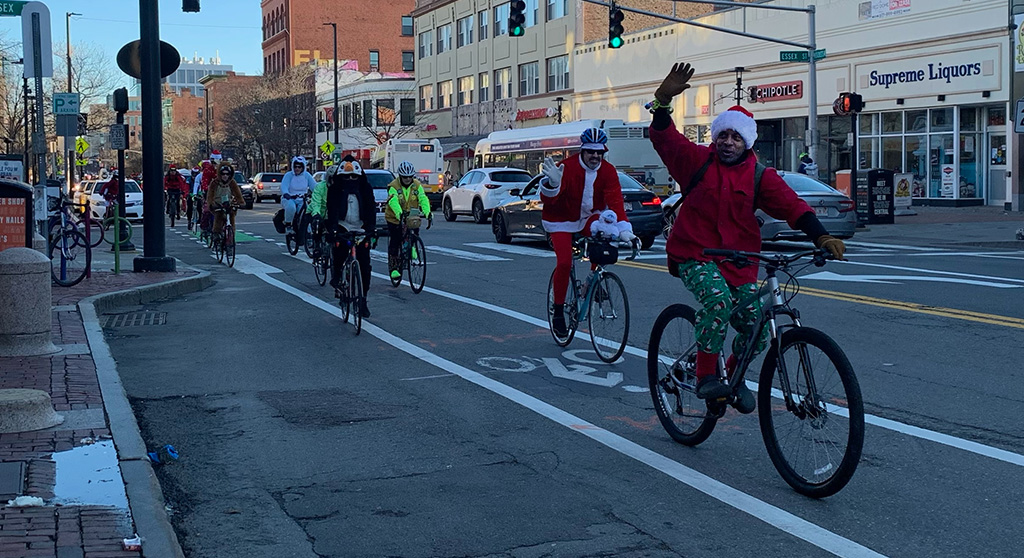 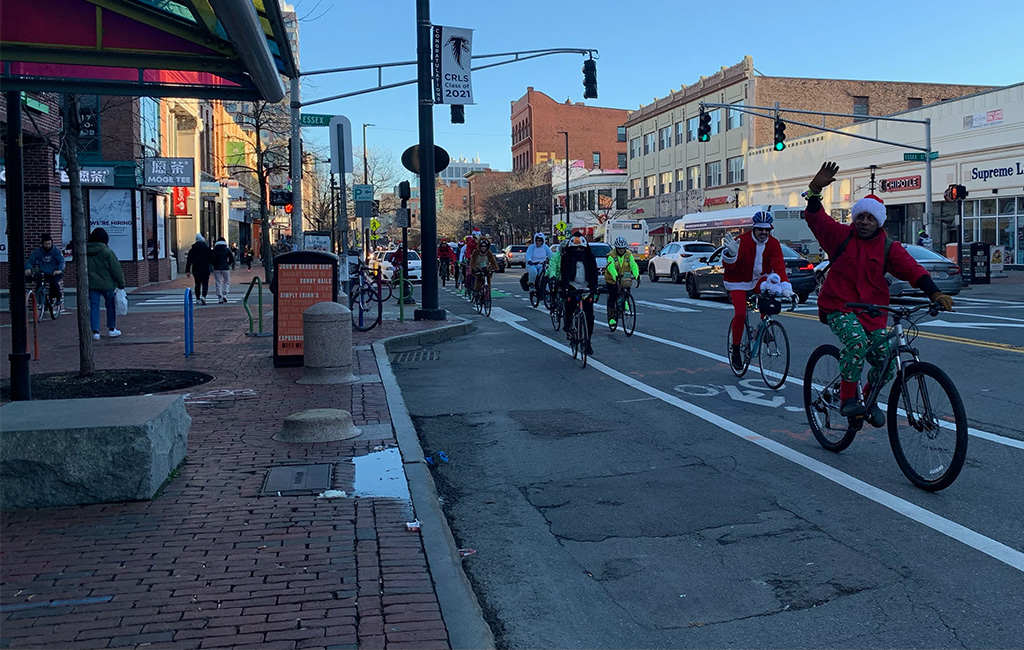 Riders use a bike lane in Central Square for a holiday-themed ride Dec. 12. (Photo: Tyler Motes)

City Council, 5:30 p.m. Monday. Bike lane installations that take away parking spaces from businesses and older or impaired people continue to claim council attention. This week sees the formal introduction of orders to convene meetings to improve the process “in the already impacted areas of the city and all new areas going forward” and to appoint a Cycling Safety Ordinance Implementation Advisory Committee of as many as 25 people. One order says pointedly that residents are asking that “the city abandon the ‘break it now/fix it later’ approach that appears to have been taken.” A draft was shown to some 90 residents at a Dec. 9 meeting in North Cambridge run by councillor-elect Paul Toner that was attended by motion-maker E. Denise Simmons as well as by retiring councillor Tim Toomey, former councillor Craig Kelley and a staffer for state Rep David Rogers.

There are also orders aimed at ensuring the city’s investments don’t include fossil fuels or prisons and that when multifamily properties go up for sale in Cambridge, the city look at them “as quickly as possible” as possible future affordable housing. A slew of end-of-the-year requests by the city manager for free-cash transfers includes such things as BlueBikes rental infrastructure and – to the tune of $500,000 – money for legal costs and payouts that have been “higher than anticipated.” In June, the city manager asked for another $280,000 to pay for “unanticipated increases in costs” at the Law Department after the council had approved $450,000 less than seven months earlier for the same reason.

Public Safety Committee, 2 to 4 p.m. Tuesday. This committee run by city councillor Quinton Zondervan will continue talking about a proposal for a community-based, unarmed alternative public safety response to policing called the Holistic Emergency Alternative Response Team. This public safety unit would be apart from the Cambridge Police Department, while a new Department of Community Safety to be staffed with trained civilians is being developed by city staff. A citizens’ presentation is expected, following a city presentation – meant to show differences and overlap in the programs – given at a Nov. 17 meeting that described unarmed response offices as being within the police department building and making the citizens’ Heart program secondary. That didn’t go over well with many residents attending, who urged funding for Heart but not the city’s proposed department. The committee meets at City Hall, 795 Massachusetts Ave., Central Square. Televised and watchable by Zoom video conferencing.

Planning Board, 6:30 p.m. Tuesday. The board takes up two zoning petitions that would change the year-old Affordable Housing Overlay’s rules around yard setbacks and off-street parking, potentially making it harder to build the housing that the overlay meant to make easier. Both have been heard at City Council Ordinance Committee hearings: the yard setbacks were kept in committee Dec. 8, while the idea of a parking requirement was rejected by the seven of nine councillors present Wednesday. Televised and watchable by Zoom video conferencing.

Health & Environment Committee, 1 to 3 p.m. Wednesday. This committee run by city councillor Quinton Zondervan continues work on revising the city’s Building Energy Use Disclosure Ordinance, meant to lower greenhouse gas emissions from buildings. The problem continues to worsen in Cambridge despite adoption of a Net Zero Action Plan in 2015, and councillors have complained that progress has been slowed by city staff being a year late on these promised amendments. The committee meets at City Hall, 795 Massachusetts Ave., Central Square. Televised and watchable by Zoom video conferencing.