Everything is Terrible! digs up VHS treasure, ‘Studio 666’ undoes Foo Fighters and more 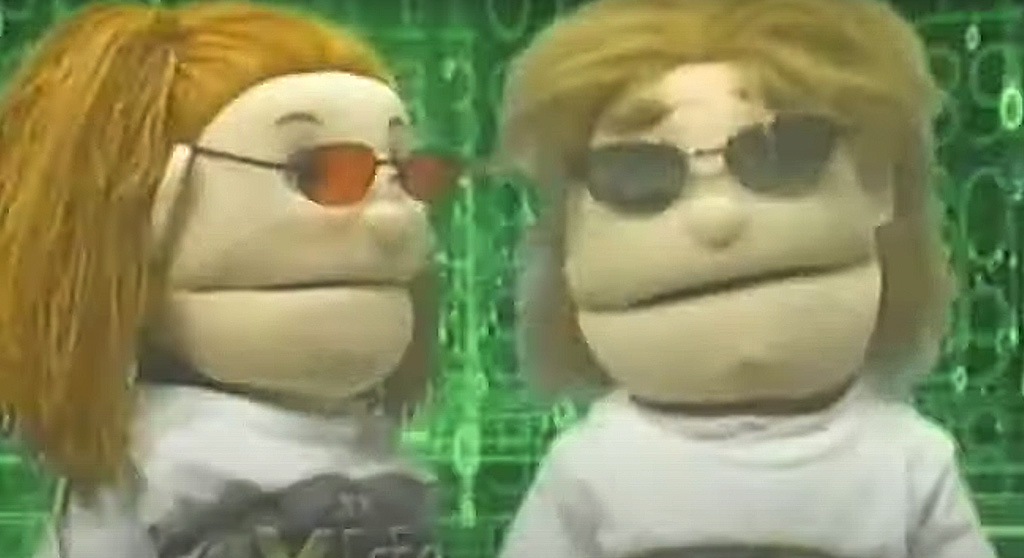 Everything is Terrible! digs up VHS treasure, ‘Studio 666’ undoes Foo Fighters and more

Lots going on at The Brattle this week. On Monday it’s the Everything is Terrible! Kidz Klub Tour, in which the crew of lost-archive junkies bring their blend of live performance and on-screen finds to the theater. Past shows – gonzo performance art with a nod to “Jackass” – have included found footage and performances that include cat massage and a French pubic hair styling tutorial. This tour boasts skateboarding Web-surfers, rapped math equations, gigantic baby ducks and, as stated in the press materials, “maybe even a wizard or two and a live experience that makes the Ice Capades look like a stupid piece of trash!” The group, in all its gleeful glory, has amassed 35,000 VHS copies of “Jerry Maguire” and transformed them into a traveling sculptural art exhibit. Brattle passes are not accepted for this one-night show.

The Brattle pays tribute on Wednesday to Italian actress Monica Vitti, who died this month, showing two of her early career collaborations with director Michelangelo Antonioni: “L’Avventura” (1960), Antonioni’s seminal masterwork and the cornerstone of his Decadence Trilogy (with “La Notte” and “L’eclisse”) starring Vitti as the friend of a missing woman who grows attached to the woman’s lover; and “Red Desert” (1964), in which Vitti plays the anguished wife of an industrialist who becomes involved with one of her husband’s business associates (Richard Harris).

Then comes “More of the Best of 2021” with Edgar Wright’s mod mondo mystery “Last Night in Soho” starring Anya Taylor-Joy, Diana Rigg, Terence Stamp and Thomasin McKenzie, and “Red Rocket,” a dive into the sad afterlives of porn stars from director Sean Baker (“Tangerine,” “The Florida Project”). Both screen Friday. A pair of directorial debuts about anxiety and identity from well-known actresses are Saturday: First up is “The Lost Daughter” from Maggie Gyllenhaal, about an academic on a work vacation in the Greek isles (Oscar winner Olivia Colman) forging strange relationships as she struggles with her past; later there’s “Violet” from “Family Ties” actress Justine Bateman, about a woman (Olivia Munn) wrestling with anxiety and a sense of herself. Gyllenhaal’s film has earned three Academy Award nominations (for actress, supporting actress and script) and was one of the Day’s top picks of 2021.

Heads up with wonderful news: The Harvard Film Archive is coming back to in-person screening starting March 20. Members-only screenings will precede. Details to follow.

On Tuesday, the Somerville Theater kicks off its John Travolta-Nicolas Cage series, “Face/Off”– referring to their joint 1997 collaboration with John Woo. Up this week are “Valley Girl” (1983), Martha Coolidge’s Cali-vernacular-spoofing rom-com that made a star out of Cage; and “Carrie” (1976), the horror film that made Stephen King a household name, cemented director Brian DePalma as a creative cinematic force and employed Travolta in a supporting role as one of the mean kids who make ample use of pigs’ blood and pay for their transgression.

A harebrained vanity project that almost works. Let’s take the popular band Foo Fighters, put them in a haunted house, have them eat lots of Doritos and go full slasher. That’s pretty much it. Dave Grohl feels “musically constipated” and the band is struggling to put out their 10th album, so what do they do? Hole up in an old manse in Encino (like Zep in the castle with “dragons and wizards and shit,” Grohl says) with a bloody shrine in the basement and a reel-to-reel recorder loaded with an unfinished music track – hmmm. Lionel Ritchie makes a hysterical cameo, the band begins to gel and comedian Whitney Cummings shouts baleful nothings over the fence. It’s all banal fun until the delivery food guy gets hacked up in grim fashion. Next on the killer’s menu? A whole lotta Foo. The acting’s on par with 2021-2022 Bruce Willis (see below) and the FX are pure 1980s slasher cheese. John Carpenter shares a musical credit for the soundtrack; they should have let him take the camera for a bit too. “Studio 666” is mostly for fans, who should have a good time with the lads acting dorky and all Scooby Doo-like. And for context: The band has put out their 10th album, “Medicine at Midnight.” At AMC Assembly Row 12, 395 Artisan Way, Assembly Square, Somerville.

Stephanie Sellars is something of the Candace Bushnell of the free-love world. She cut her name writing a “Lust Life” column for the now defunct New York Press, taking the POV of a bisexual polyamorist. Here in her feature film directorial debut, she stars as Veronica, the incarnation of that penned poly persona who lives with a girlfriend but frequents sex clubs on her own to meet up with couples or engage in group sex. For those not in the know, it’s an intriguing glimmer into the lifestyle and the notion of “compersion” – the opposite of romantic jealousy – that gets challenged when Veronica becomes attracted to a married man (Jake Choi). Themes of true love and sexual liberation and the tug of war between the two are explored, as are class and privilege when we drop in on Veronica’s well-to-do family in Connecticut. They aren’t so warm to LGBTQ inclusion, let alone free love. The film’s well-acted and impressively photographed, with lots of lush reds. In the end, however, the evolution of Veronica and her recruited love interest shifts from the exhilaration of exploration and ribald companionship to controlling, self-interested agendas; it feels as if all that talk about freedom and compersion was all setup with no payoff. On Amazon Prime Video.

Bruce Willis and writer-director Edward Drake release their fourth crime drama turd within 12 months (“Apex,” “Cosmic Sin” and “American Siege” the other cinematic sins). The noir-wannabe has an enigmatic strongman, Jimmy Jayne (Devon Sawa), a tattoo artist with a Vin Diesel growl, implicated in the triple murder of three Hollywood starlets with Willis and Luke Wilson as the detectives on the case. As you can guess, the crime is part of bigger machinations, and the secret of the real killer is a convoluted twist. Only Sawa looks like he cares about putting in a decent day’s work; Willis pretty much does the same here as he has in his past seven to eight direct-to-VOD bombs. Not sure any of them got above the abysmal 4.0 mark on IMDB, and this one’s unlikely to as well. On Amazon Prime Video.