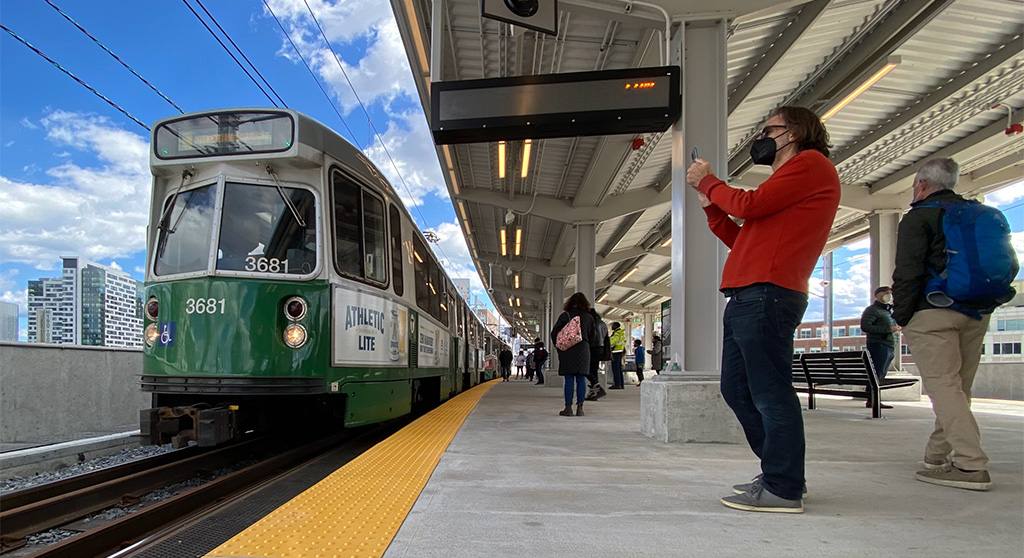 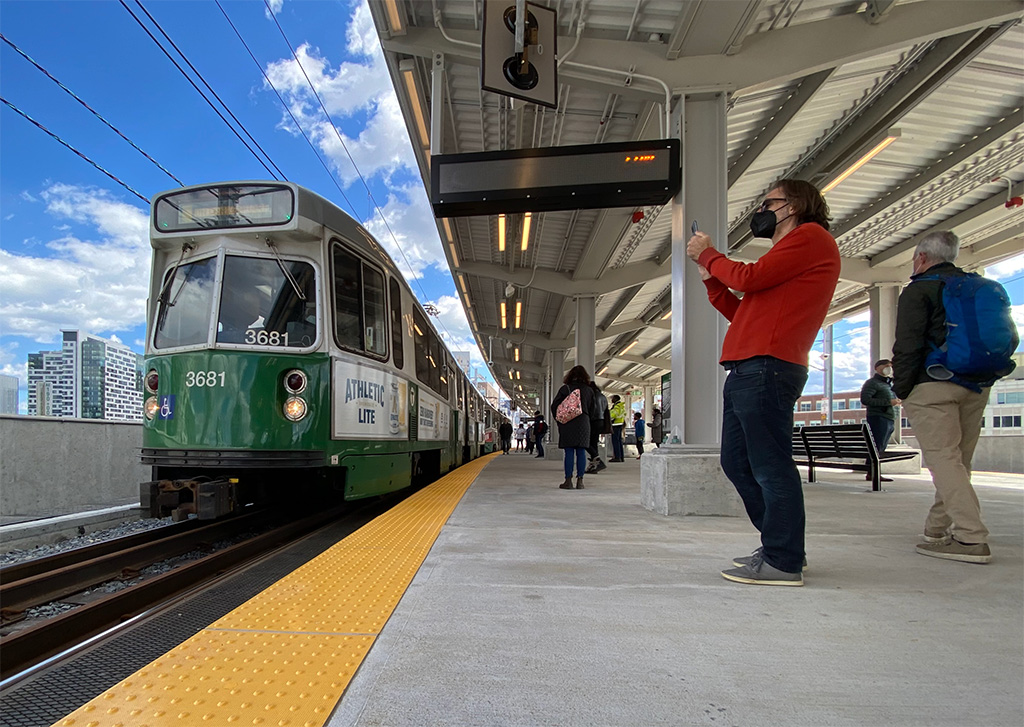 Service restarted Monday from a relocated Lechmere MBTA station to Somerville’s new Union Square station as part of the state’s green line extension, a moment of joy in a project years overdue and once declared all but dead.

Union Square is a one-stop spur from Lechmere, which has been relocated from East Cambridge to the Cambridge Crossing development in North Point, across Monsignor O’Brien Highway. Other stations in the green line extension, which will head toward Tufts University in Medford through Somerville, have been targeted for a May or June launch.

The first trains rolled at 4:50 a.m. – state Rep. Mike Connolly and Somerville’s past and current mayors, Joe Curtatone and Katjana Ballantyne, were aboard – followed by a ribbon-cutting ceremony held beneath the new Lechmere stop in a windy, 50-degree chill. The speeches, led by MBTA general manager Steven Poftak and ended by green line extension program manager John Dalton with a series of state and local officials between, looked forward as well as backward. They also called for mass transit to be done with social justice in mind, unlike past projects that uprooted communities of color and lower incomes, and there were a few calls from the dais to make fare-free transit the next step.

“Apparently everybody in the United States wants to live along the green line,” state Sen. Pat Jehlen told a crowd of a few hundred, who laughed appreciably and went silent at her next thought – that if those real estate pressures gentrify as usual, “the things that make our community attractive won’t exist: immigrants, working-class people, long-term residents as well as small businesses. There are solutions that should be adopted immediately to stop displacement, protect existing affordable housing and promote homeownership.” 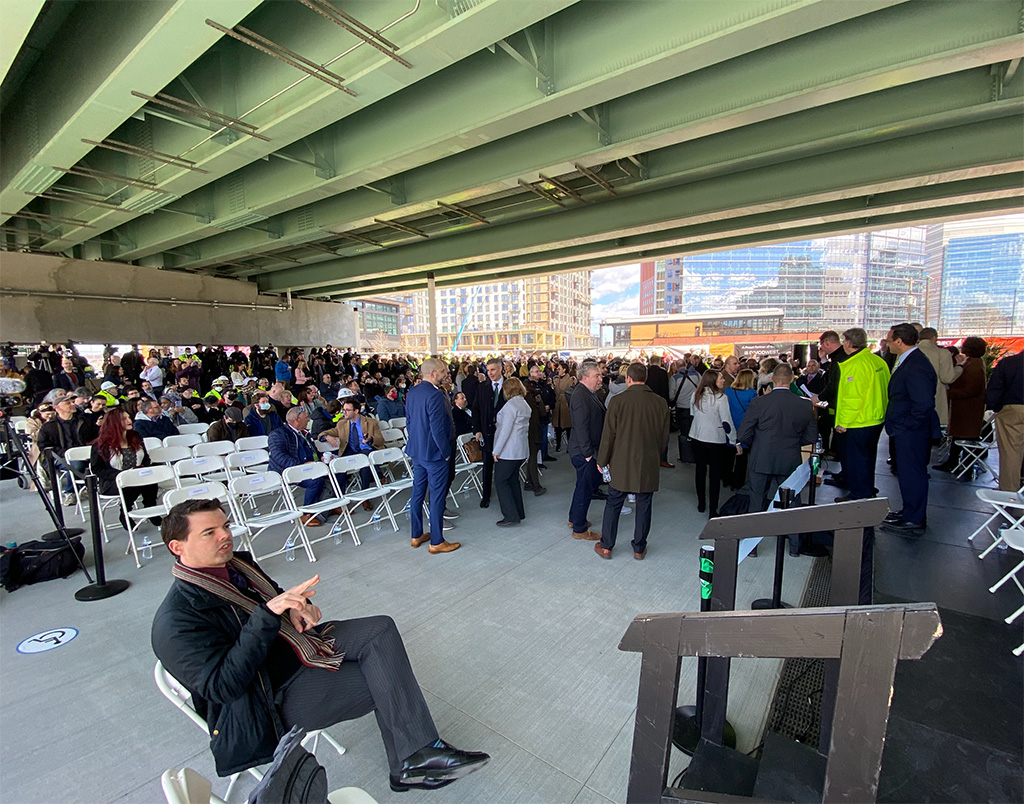 “It will be tragic if the people who need public transit the most can’t afford to live here,” Jehlen said.

Former U.S. Rep. Mike Capuano, who was mayor of Somerville in the 1990s and credited by Poftak and others with “wrestling” initial project funding out of the federal government, acknowledged “all the people who got screwed, all the people that got kicked out of their houses.” (Around 10,000 people were displaced during the construction of McGrath Highway in the 1950s and another several thousand kicked out to make way for route 93.) Ballantyne agreed the green line extension was “only a partial remedy for the many decades of harm and social and environmental injustice” from car-focused postwar urban renewal, which boosted the suburbs while taking away Somerville’s trolleys. 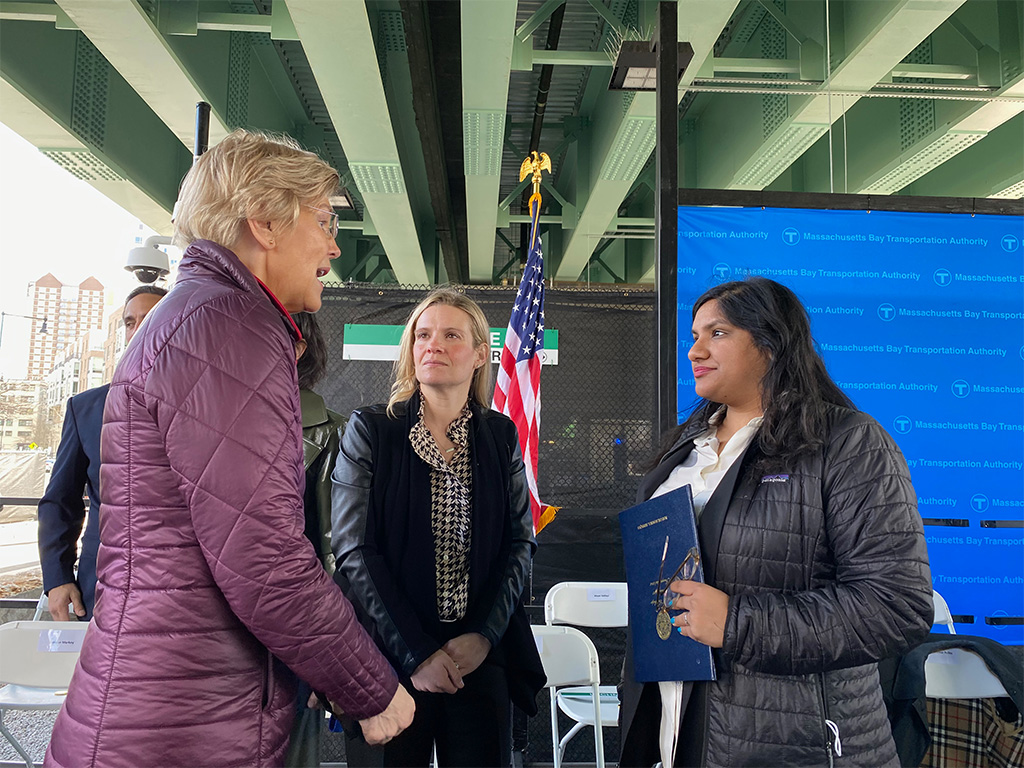 U.S. Sen. Elizabeth Warren’s moment at the lectern presaged that, noting that most residents of  Somerville – which she called the most densely populated city in New England – lacked until that Monday their own access to rail transit, and instead suffered under polluting diesel buses.

Among those calling for “development without displacement” and fare-free transit was U.S. Sen. Ed Markey, who noted that the first formal proposal for an MBTA extension from Lechmere station was in 1926.

Speakers that followed talked as well about how long the project had taken, though from a slightly more recent perspective: Capuano, who recently turned 70, quipped that “I do not remember a day my life when the people of Somerville did not think the green line was coming soon.” Curtatone remembered the project being revived in the late 1980s before it was locked in as a legally required mitigation for construction of Boston’s Big Dig, begun in 1991 and ending in 2007. 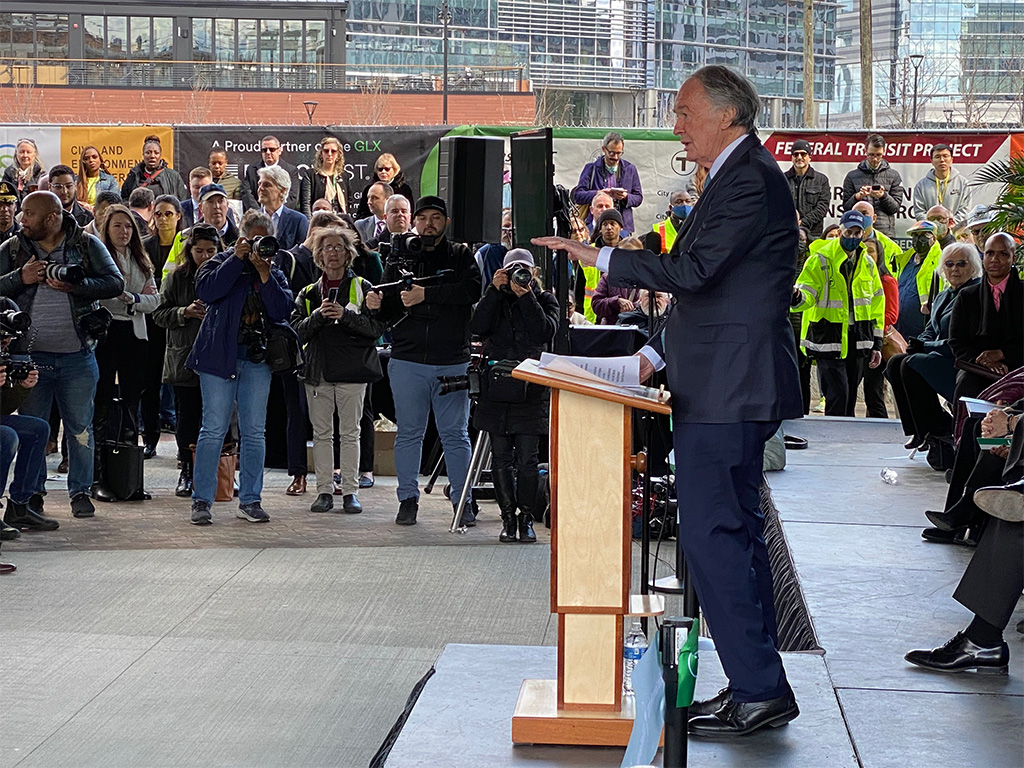 Among the stops and starts to the opening of the green line extension stations was May 2016, when the project was threatened by collapse after cost overruns. Somerville committed $50 million and Cambridge committed $25 million to the state to keep the project alive. Curtatone and Cambridge’s city manager at the time, Richard C. Rossi, called it “an extreme and unprecedented arrangement for a state infrastructure project.”

Five more green line extension stops are due in the summer – a Medford branch with stops in East Somerville, Gilman Square, Magoun Square and Ball Square and ending in Medford at Tufts University. Before the nearly fatal cost overruns, there were six stops planned, taking the line as far as Route 16; Ballantyne, Jehlen and others demanded that be the plan again.

“Many people think that the green line will permanently end in Tufts in West Medford, but we will not stop until it reaches Route 16,” Jehlen said. 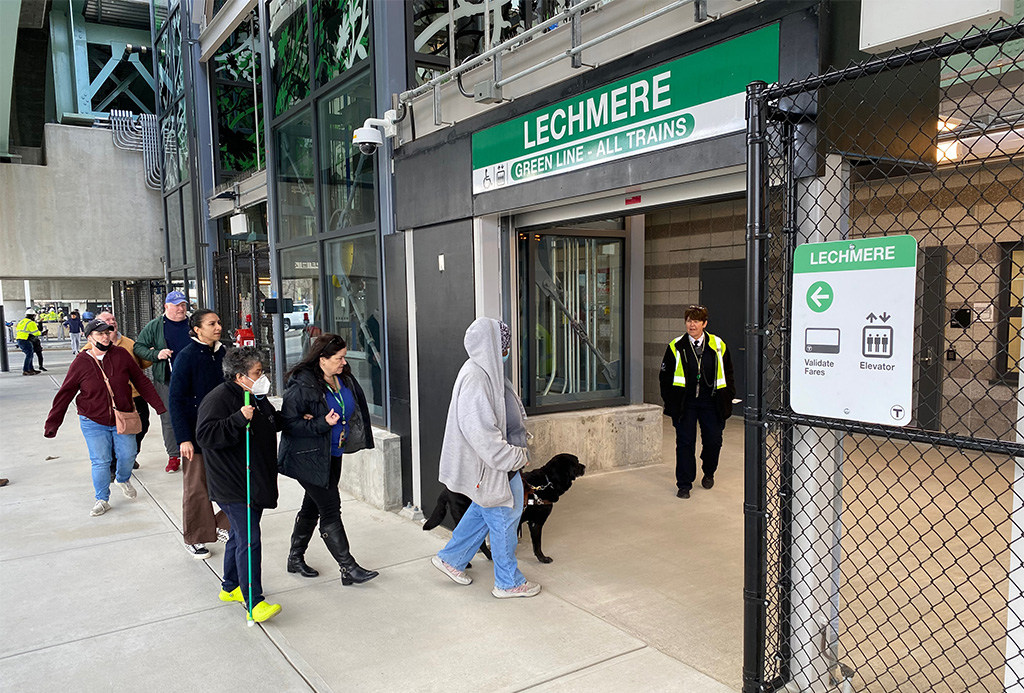 Curtatone went further, saying it was time for the green line to connect to the red line in Porter Square, as Cambridge officials agreed in late February.

With $9 billion in federal infrastructure coming to the state, now is the time to push to build more fixed-rail projects, officials said. “It is important to repair potholes and crumbling overpasses, but we also need to be bold and visionary,” Warren said.

Transit was an economic necessity, the officials said, and some of those onstage said they knew firsthand from growing up in the area. 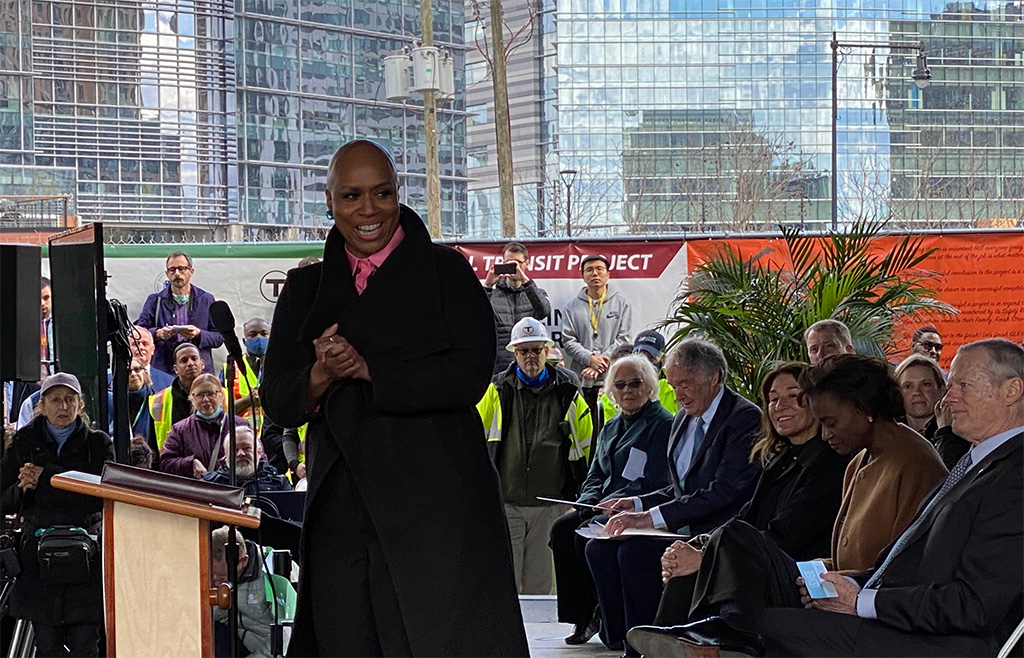 Cambridge Mayor Sumbul Siddiqui said the project’s opening had her thinking about her father, whose 25 years of work in a department store were enabled by the No. 69 bus and green line, and considered the extension “an investment in the economic and environmental health of our communities.” U.S. Rep. Ayanna Pressley said she too knew that as a connection to jobs, health care, school and more, mass transit “isn’t a nice-to-have, it’s a must-have. Transit is intersectional to everything else. It is a matter of economic justice. It is a matter of climate and environmental justice. And it is a matter of housing justice.”

While there were a handful of jokes about how many groundbreaking ceremonies there have been for the green line extension – four, at least – Curtatone said it has had a lot of wakes too. When he was told the 2016 cost overruns had killed the project, “that was another blow to the community. But if there’s anything that gets the City of Somerville motivated, it’s telling them something’s not going to happen,” Curtatone said.

The $75 million from Cambridge and Somerville was ultimately not needed for the project and was returned.

“We’re pleased that the money we contributed has been returned to us and to [developer] DivcoWest,” Siddiqui said. “But we will be ready whenever, if ever, there is a need to assist.”

The Lechmere and Union Square stations opened ahead of a new fare-system rollout that allows riders to tap their CharlieCards; a video released by the MBTA shows an interim process that asks riders to bring a receipt with them as proof of payment for a ride.