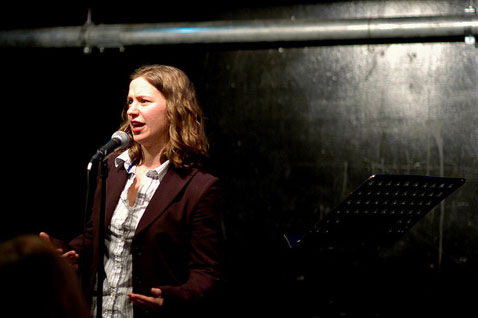 A poet reads at the Boston Poetry Slam, held downstairs at The Cantab Lounge in Central Square for two decades. (Photo: S. Robarge)

For a Wednesday night, the Cantab Lounge’s dimly lit basement gets packed. A line extends up the stairs and down the block for several yards.

The Cantab Lounge is normally a neighborhood bar with live music, but most patrons aren’t there for drinks or music. They are there for poetry — the Boston Poetry Slam, hosted weekly at The Central Square lounge. It packs in the regulars and welcomes new poets, readers and spectators of all ages, background and styles.

“It’s the fact of how open, inviting and nurturing this place is,” said Meaghan Ford, 25, who has performed poetry at the lounge for nearly five years. “It’s what keeps me coming back.”

In mid-October, the Cantab Lounge celebrated its 20th anniversary of weekly poetry. For years, poetry nights at the lounge have been divided into three primary parts: a nearly two-hour open mic; the work of a featured poet who takes the stage for a half-hour; finally, an open slam session that finishes around midnight.

In the open mic session, the first 20 poets who sign up at the door get to perform original and others’ poetry. Many are first-timers greeted with encouraging applause from the audience, no matter how young — and while the bar is 21-plus, the slam is 18-plus with photo ID. That can make the work radically different from Cambridge’s other weekly poetry slam, which takes place Sundays at the Lizard Lounge, a bar that is 21-plus only.

Because of the 18-plus policy, “the audience is considerably younger. In such a college town, it’s a lot easier for them to get an audience,” said Jeff Robinson, who runs the Lizard Lounge event. “I wish we were 18-plus!”

Mike Mirabella, 18, a freshman at Emerson College who began attending the Cantab’s poetry nights in September, benefits from the Cantab approach.“The community is really welcoming here,” Mirabella said. “Everyone is really accepting of what your idea of poetry is and always supportive of first-time readers.”

It’s apparent even to a first-time attendees such as Allison Carswell, 39.

“I think this place is great,” Carswell said Nov. 14, during her first visit. “They all seem like they know each other here, but they were still really nice and supportive of first-time readers.”

The Cantab Lounge is at 738 Massachusetts Ave., Central Square. The cover charge for the Boston Poetry Slam is $3, or $5 for special events. Admission is first-come, first-served. Doors open at 7:15 p.m. Wednesday and the poetry-only open mic starts at 8 p.m. For information, click here.