The areas, neighborhoods and squares of Cambridge 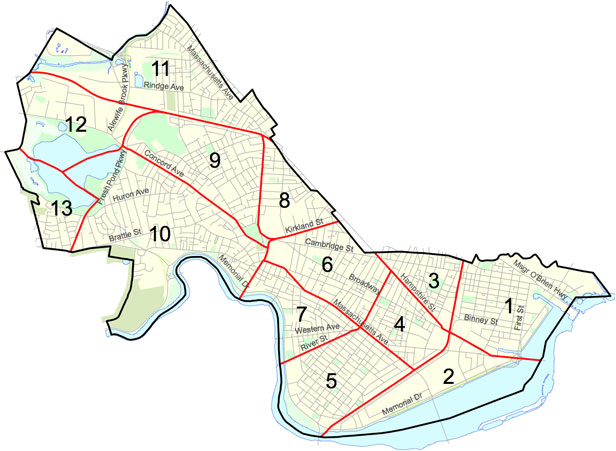 There’s no real easy way to get into the details, or through them.

But city government also calls these Cambridge’s five major squares: Central, Harvard, Inman, Kendall and Porter, even though many newcomers will probably discover Cambridge first through its T stops, which excludes Inman but adds Alewife and Lechmere.

It may not make sense at first, but take heart. Cambridge is only 6.43 square miles and densely populated, so how lost can you get? To get you started getting lost, here’s a guide to how the squares and areas overlap with the neighborhoods:

Agassiz takes you all the way from Harvard Square to Porter Square and Somerville, defined by Massachusetts Avenue to the west and Kirkland Street to the south. It’s named after a man whose reputation has (rightfully) suffered – zoologist Louis Agassiz, who disagreed with Darwin and hewed to an ugly eugenicism – which is why the name of the neighborhood’s Agassiz School was changed to the Maria L. Baldwin School in 2002.(Harvard is rotten with things named Agassiz, but the argument is that they’re named after other family members.)

Alewife is in North Cambridge above Cambridge Highlands, but walk south across a bridge and you’re at Fresh Pond.

Avon Hill is an upper-class neighborhood of Porter Square, which puts it in Neighborhood Nine (also called Area 9) and Peabody — and looks across Massachusetts Avenue at North Cambridge.

Brattle Square is part of Harvard Square to the west, at the complex intersection of Brattle and Mount Auburn streets just above Eliot Square.

Brattle Street is Tory Row, and vice versa, and they’re both an area of large, beautiful and historic homes to the west of Harvard Square in West Cambridge.

Central Square is at the nexus of Mid-Cambridge, The Port (formerly Area IV), Cambridgeport and Riverside. Lafayette Square is attached to the east by Massachusetts Avenue.

Charles Square is part of Harvard Square to the west, a private area between The Charles Hotel and Harvard’s Kennedy School of Government next to Eliot Square.

The Coast is another way to refer largely to the Riverside neighborhood — except that it also includes a sliver of Cambridgeport.

Coolidge Hill is a ritzy area between Mount Auburn Cemetery and the Charles River in West Cambridge.

Deguglielmo Plaza is part of Harvard Square in front of 25 Brattle St., where Brattle Street turns and Eliot Street begins.

Eliot Square is part of Harvard Square to the west, where Eliot and Bennett streets meet just below Brattle Square.

Fresh Pond is the neighborhood of the Fresh Pond Reservoir below Alewife and overlapping with Cambridge Highlands toward the north, Strawberry Hill toward the south and Neighborhood 10 (also known, confusingly, as West Cambridge) toward the east. (And the town of Belmont to the west.)

General MacArthur Square is a small, V-shaped Harvard Square island between Massachusetts Avenue (on both sides, east and west) and Garden Street (to the north) as well as between the Old Burying Ground (to the west) and Harvard Yard (to the east).

Harvard Square is considered to be mainly in West Cambridge/Neighborhood 10, when anybody bothers to think at all about which neighborhood it’s in. But Cambridge Common is in Neighborhood Nine, as soon as you cross Harvard Yard toward the university’s Science Center and Sanders Theatre you’re in the Agassiz neighborhood and plenty of the square fades off to the east into Riverside. It makes thinking about “where” Harvard Square lies, except as its own place, more or less useless.

Harvard Yard is Harvard’s quad and old campus, located to the northeast of the heart of Harvard Square — the plaza and “bunker” providing access to the MBTA red line. Harvard Yard remains surrounded by gates, which can be locked and guarded. They are at times of campus unrest, causing residents and tourists to walk around while members of the Harvard community can walk through.

Huron Village is in West Cambridge/Neighborhood 10, east of Fresh Pond.

Inman Square is arguably in Mid-Cambridge and Wellington-Harrington, blending imperceptibly into East Cambridge to the north up Cambridge Street.

Lafayette Square is attached to the east side of Central Square on Massachusetts Avenue.

Larchwood is the southernmost portion of Neighborhood Nine, above Cambridge Common, West Cambridge and Harvard Square and to the west of the Agassiz neighborhood. Upland Road is its border to the north.

Lechmere is the MBTA green line stop named after a defunct department store that provides access to East Cambridge and NorthPoint.

Observatory Hill is midway between Fresh Pond and Harvard Square, clustered around the intersection of Concord and Huron avenues.

Peabody is another way people have to refer to Neighborhood Nine (also called Area 9), made distinct from North Cambridge only by being south of Massachusetts Avenue.

The Port is northeast of Cambridgeport and Central Square with Massachusetts Avenue as a dividing line, stretching from Prospect Street to around Vassar Street, and a renamed Area IV neighborhood, as of 2015. It stretches to Hampshire Street to the northeast, because above Hampshire Street is Wellington-Harrington.

Putnam Square is the area around where Mount Auburn and Massachusetts Avenue meet on the east side of Harvard Square. The remnants of an informal housewares and furniture district can still be found here.

Quincy Square is in Harvard Square, where Quincy Street (which defines the eastern edge of Harvard Yard) meets Harvard Street as it meets Massachusetts Avenue.

Radcliffe Yard is south of Cambridge Common on Garden Street, a few blocks northwest of the heart of Harvard Square. The sexes were once separated at Harvard, with women officially attending getting a Radcliffe degree.

Sullivan Square is at the eastern edge of Harvard Square, as it becomes Mid-Cambridge, where Trowbridge Street meets Massachusetts Avenue from the north and Putnam Avenue meets it (and Mount Auburn Street) from the south.

Tory Row is Brattle Street, and vice versa, and they’re both an area of large, beautiful and historic homes to the west of Harvard Square in West Cambridge.

Strawberry Hill is a small area that starts mid-Fresh Pond Reservoir and Thomas P. O’Neill Municipal Golf Course and extends south to the borders of Belmont and Watertown, going only as far east as the train tracks.

Wellington-Harrington incorporates most of Inman Square (and some of Kendall Square) as it stretches from Hampshire Street to the southeast all the way to the Somerville border at the north. Here you’ll find some of the most sensible geography in the city: East Cambridge is t0 its east.

Winthrop Square is a blocklong park at Winthrop and JFK streets in Harvard Square. It was the site of Cambridge’s first farmer’s market (back when Cambridge was called New Towne, in fact) and next to its Puritan-era jailhouse.