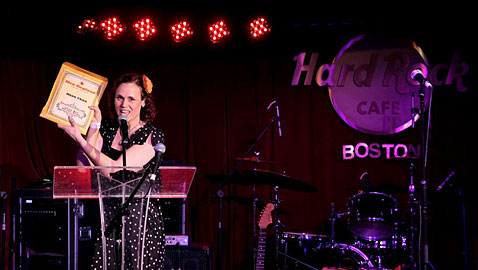 More than 100 bands and musicians are counting down the days to the second annual New England Music Awards, taking place April 13 at the Lowell Memorial Auditorium.

“Right now we are building the New England version of the Grammys,” said awards co-founder Joe “JoeG” Graham, 39. “For one night the entire music scene will all be in one place; for one night we’re going to transform this venue into the biggest nightclub in New England.”

The nominees – which have been selected from a list of more than 300 musicians and bands – will have the opportunity to win in one of 23 different categories, including Band of the Year, Song of the Year and Album of the Year as well as in specific genre and state awards.

Graham said he and co-founder Dennis Hennessey have booked surprise acts that might bring greater attention to the ceremony. With this media attention, the NEMA founders said an upsurge in career opportunities and contacts could benefit nominated musicians and artists in coming years.

“It’s a concert, it’s a social event and it’s a huge opportunity for these musicians,“ Graham said. Graham – a radio personality – is also the live events coordinator for WMBR-FM, the radio station at the Massachusetts Institute of Technology. He organizes many of the institute’s live events, including its biggest outdoor concert, The Fred Fest.

This year’s nominating committee reviewed more than 1,100 submitted acts, a significant increase from last year’s 700. More than 100 bands and musicians were nominated, including popular acts such as Dispatch, Karmin and Grace Potter and the Nocturnals. These acts were submitted by the committee itself, as well as fans and musicians from across New England.

“These bands from out of town have the opportunity to be heard in town and in the Boston area,” said D-Tension, 41. He has spent the past 20 years writing music, producing and working as a booking manager in the New England area. “It’s hard to make it in the music industry, and this event is a really huge place for opportunity.”

The move to Lowell

The success of last year’s event at Boston’s Hard Rock Café surpassed the founders’ expectations. The venue hit its full capacity of 350 in less than 45 minutes.

“We had an advanced sellout last year and turned away close to 100 at the door,” Graham said. “That’s part of why we changed venues and moved it to a 3,000-person venue for this year.”

Although Boston is often considered the musical and cultural hub of New England, founders said the Lowell location will make the event more accessible and affordable to more people. Graham, Hennessey and their producer – John Fleming, of Fleming Entertainment – said they have arranged deals with Lowell hotels that will cut costs for traveling musicians drastically.

“I think given that it’s the New England Music Awards, this may be more centrally located,” Halter said. “I think we’re a perfect venue for this sort of activity. That’s what this city wanted to rebuild around – the arts.”

Graham said he and other NEMA executives have asked other popular New England musicians – including the Dropkick Murphys – to perform at the event.

“They haven’t answered, but Dennis and I know we’re onto something that has the potential to be great and we’re just building it,” Graham said. Despite the silence of these bands, Graham said he’s hopeful for the awards’ future.

“They’re not answering now, but in five years they will be.”