‘You’re Next’: Yuppies face some cuts in dark and funny indie horror 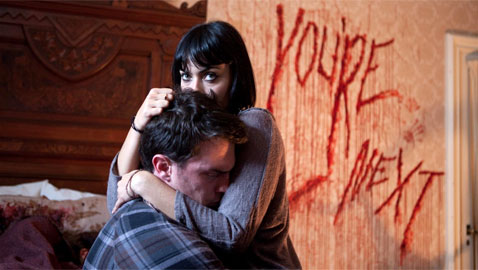 ‘You’re Next’: Yuppies face some cuts in dark and funny indie horror

A bunch of well-to-do yuppies head off to a remote manse for a family reunion of sorts. Dad’s recently retired and made millions as the head of marketing for a defense contractor (isn’t the market the government?). The renovation of the aging structure is supposed to be his golden years’ project, but things in the woods aren’t so idyllic. His eldest sons, the uber-yup (Joe Swanberg, whose upcoming directorial effort, “Drinking Buddies” is an indie must-see) and the doughy academic (A.J. Bowen), are continuously, and ideologically, at each other’s throats. Along too are the younger sister and brother, and all have wives or SOs, but they mostly don’t matter – they’re all primarily fodder for a group of animal-masked marauders who mysteriously show up and pick apart the family one by one, starting with the opening salvo of crossbow bolts. 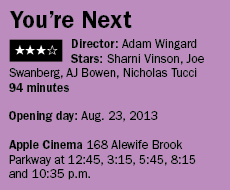 Cellphones naturally don’t work (though the reason why is solid) and each swing of a creaky door yields either a booby trap, knife-wielding psychopath or false alarm gasp from the audience.

As boilerplate as the plot is, the sense of dread and the motive why drives the film. The production values are low and the acting flat with the exception of Swanberg and Sharni Vinson as the prof’s demurring tag-along who grew up in a survivalist compound in Australia. She’s a can-doer and the wrench that puts a grind in the killers’ grand scheme. The script by Simon Barrett (of the cult-horror collaborative “V/H/S”) offers some dark and funny barbs, both at the dinner table as siblings feud over trite matters and at the moments of macabre demise. The direction too by Adam Wingard (another “V/H/S” alum, along with Swanberg) is competent and boosts some adroit twists, but as with most slasher fare, there are plenty of WTF moments.

“Next” isn’t on par with the original 1972 “The Last House on the Left,” which is still the gold standard in home-invasion thrill-kill rides, but a cut above most. Sometimes DIY love on the low trumps a studio hack, especially when it’s a film about hacks.