‘Brooklyn’: Coming to America, and of age, has never been so pretty, hopeful, romantic 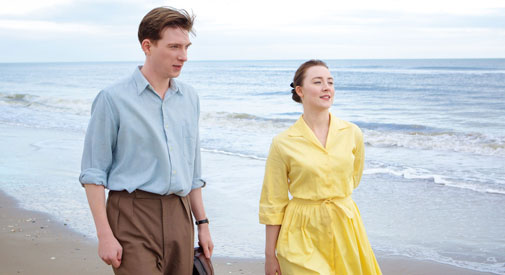 ‘Brooklyn’: Coming to America, and of age, has never been so pretty, hopeful, romantic

What makes “Brooklyn” such a terrific viewing experience is how unremarkable the story is. The big, life-changing event takes place in the opening 20 minutes of the film, and everything that follows is a classic coming-of-age story in which a young woman must find herself in a new home, with a new life and fresh faces surrounding her. “Brooklyn” is such a success because its characters are so uniformly decent, all trying to make their way in the world being kind-hearted and hopeful. The lavish set design and warm love story, the earnest performances and the movie’s unflinching, optimistic tone could make “Brooklyn” one of the finest films of the year. 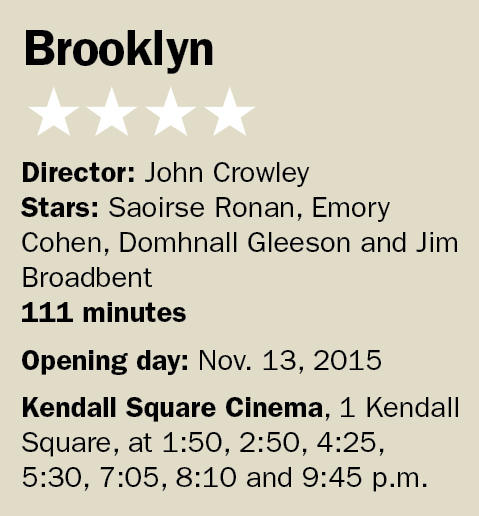 Ellis (Saoirse Ronan), an Irish immigrant, has moved to Brooklyn from Ireland, when her sister Rose (Fiona Glascott) reaches out to Father Flood (Jim Broadbent) to put her up in a boarding house run by Mrs. Kehoe (Julie Walters). Ellis leaves her family with the hope of finding a better life for herself in New York – and in some respects she does, starting a job and being placed in night classes for bookkeeping with Flood’s aid – but this doesn’t erase the terrible homesickness she feels. Once she meets Tony (Emory Cohen), an Italian boy, she soon finds this changing, finding herself a second home. Once personal tragedy strikes, she’s forced to travel back to Ireland, where a young man, Jim Farrell (Domhnall Gleeson), makes her wonder just where she belongs.

It’s a richly told story, and Nick Hornby’s adaptation of the Colm Tóibín novel is satisfyingly emotional, while also doing a smart job at building the character of Ellis and those surrounding her. Directed by John Crowley (who shot the breakout vehicle for Andrew Garfield, “Boy A”), the film has a lot of love for its heroine, and Crowley and Ronan make a wonderful team. Ronan allows Ellis to have an unwavering amount of emotional availability, and it truly is her film; from beginning to end we’re 100 percent on Ellis’ side. The breakout of the film, however, might be Cohen’s Tony, whom the actor instills with a sense of good-natured confidence and charm, winning the audience’s hearts as well as Ellis’.

The rest of the supporting cast is strong as well, with Broadbent and Walters bringing seemingly effortless gravitas to the film, and Gleeson is so good (if sadly underused) that it’s easy to understand why Ellis may be drawn to him, even when her chemistry with Tony (and Ronan’s with Cohen) is so strong.

It’s a film that’s positively engulfed by its atmosphere, each frame offering us a look at a world of possibility. From the folk-inspired score by Michael Brook to the eye-catching costume design by Odile Dicks-Mireaux, each scene builds a sense of identity even when the characters aren’t speaking. I love a movie that loves color, and boy does “Brooklyn” love color. From Ronan’s icy blue eyes that so captivate the camera, to Ellis’ green bathing suit at the beach or Tony’s green shirt at an Irish dance that cause them to stand out in a crowd, to the abundance of natural scenery on the streets of New York or countryside of Ireland, “Brooklyn” sees the beauty of its landscape. The cinematography by Yves Bélanger (who also did the stunning “Laurence Anyways”) expresses Ellis’ youth, curiosity and discovery of freedom through the colors swirling around her and constant business of her surroundings.

The overall effect is astonishing in its simplicity. The story isn’t overtly complex, but the emotional pull is so genuinely moving, the characters so carefully drawn and the world so detailed that it’s a truly immersive experience.