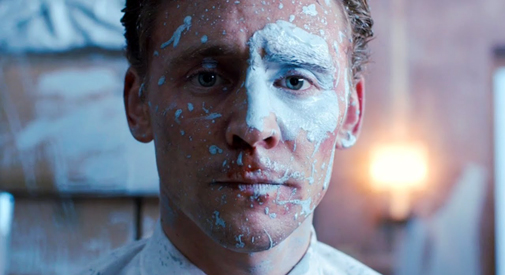 Ben Wheatley’s newest film is a repulsive, structureless, obscenity of a film that would rather glorify hyper-violence, sexual assault and mayhem then tell a comprehensible story. Bogged down by its purposeless, nonlinear narrative, it’s often-grotesque imagery and a story that never seems to make satisfying sense, “High-Rise” is a film that from a distance is intriguing, thoughtful and visceral – and up close is viscerally repellent. 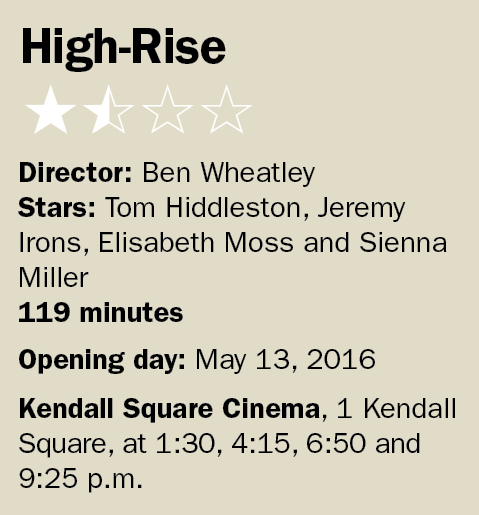 There are no half-measures in this Wheatley film, and while there’s room to celebrate what artistry is on display, it’s rather easier to pick apart just how shamefully the film under-delivered on its promise.

Tom Hiddleston stars as Dr. Robert Laing, a new resident at the High-Rise, developed by Mr. Royal (Jeremy Irons). There he meets a host of colorful characters, from Elizabeth Moss’ put-upon Helen, who lives on the lower-class levels at the bottom of the building with her husband, the hotheaded Richard Wilder (Luke Evans). He soon grows attracted to the alluring Charlotte (Sienna Miller), whose party invitation is his indoctrination into the anarchistic rules of the building.

The frustrations of “High-Rise,” based on the novel by J.G. Ballard and adapted by Amy Jump, lie not just with the end result but in its sloppy mechanics. I admire filmmakers who aren’t afraid to take risks, who put their trust in the audience – but that doesn’t mean disposing of anything that resembles a functioning story. The film meanders through its first two acts as life in the High-Rise inches its way to chaos before a third act that races through every decision until an ending that feels telegraphed but tacked on. A more elaborate exploration of the final half-hour and the deteriorating ecosystem would have provided a semblance of payoff.

There are interesting theories packed around the land mines of animal cruelty, rape and disorderly conduct encountered in this film. The script toys with the notions of patriarchy and how, even at the top, the wife of the architect is treated more like a trophy than a person; then the film employs an unnecessary scene in which a woman is dragged, begging, clawing and screaming, across her living room floor. We’re shown the mountains of trash that begin to take up every crevice of the building as the tenants lose the will to behave as humans, happy to instead let the trash accumulate, befitting their new lives, but it’s something that becomes more of a distraction than a plot point. There’s even the crushing blow of a thought the film leaves us with – that even after witnessing the many follies of man and their mistakes, that even after seeing people turn to violence and total, societal disorder, we’re still doomed to make the same, mortal mistakes.

What the film lacks in structure and soul it tries to make up for with style. From the fully orchestrated opening and brief flash-forward to the set design of the in-house grocery store or the way the camera captures the perfectly applied gray paint over the panes of Hiddleston’s cheekbone, the film has an equally glamorous and off-putting aesthetic. For every lavish shot we get of a woman riding a horse on the penthouse rooftop of the High-Rise, we are in return given a scene of a head being split in two. Laurie Rose’s cinematography distinguishes the luxuries from the horrors, helping deliver the film’s few moments of real impact.

Hiddleston continues to convince as leading man, even as an unconventional one as Laing; he’s caught up in his own head for much of the film, and Hiddleston delivers a very internal performance. This isn’t so much a film where the performances are on display, but one where each character is used as a pawn for a greater purpose.

Mr. Royal mentions that the High-Rise serves as a “crucible of change” as the very worst, most depraved aspects of human behavior come into play. Wheatley is undoubtedly a skilled filmmaker, and there’s something to celebrate about this messy, aggravating film, but it would have been immensely more satisfying if those themes of crucibles and and change had been really signaled as we amble through mindless, slow-motion images, dream-sequence dance scenes and so much violence.

The film is trying to say something, and the ambiguity is all well and good, but we shouldn’t be wondering just what the film was trying to convey by the end of two hours. It should have reached a point by then.