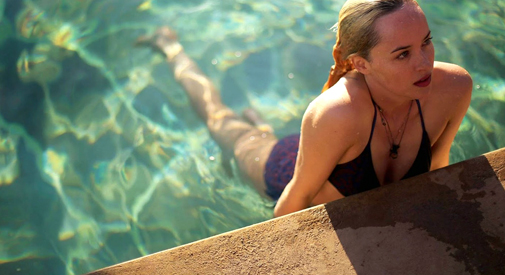 To the sun-baked island of Pantelleria, a volcanically formed paradise between Sicily and Tunisia, Marianne Lane (Tilda Swinton) has come to roost and rest her strained vocal cords. It’s a riveting performance by Swinton, who doesn’t get much to say – her Marianne has just had throat surgery and must, by medical decree, not speak. Her voice is the source of her living, too. It might not register on the first glimmer of Marianne lounging nude by a villa pool in “A Bigger Splash,” but she’s an arena-filling rock star, world-adored and aging gracefully; one dash Marianne Faithfull, one part Patti Smith and a big splash of David Bowie. It’s uncanny too, as Swinton, with her ageless, elven features, may be the most natural incarnation of the late, beloved rocker. 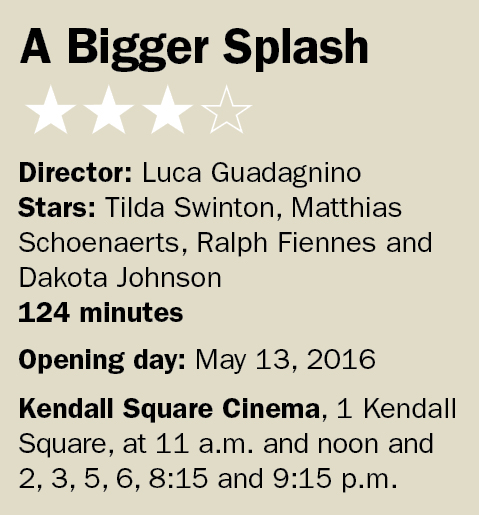 Accompanying Marianne on her retreat is her younger, doting lover Paul (Matthias Schoenaerts, the brooding Belgian actor in “Far From the Madding Crowd’’ and “The Danish Girl’’) who’s more than just a boy toy and manservant. He makes documentary films, which is how the two met, and is a recovering, struggling alcoholic with a few troubled blips in his past. Also dropping by unexpectedly, because these things just happen on remote rock outcroppings in the middle of the Mediterranean, is Marianne’s ex-lover and producer, Harry (Ralph Fiennes), with a nubile young blonde named Penelope (Dakota Johnson) who claims to be the daughter daddy didn’t know he had (or one of the many) and recently made contact with him just as she’s blossoming into womanhood – something, given her Lolita looks and exiguous mesh tops sans bra, that she’s embracing fully. She’s the fly in the ointment while Harry’s the life of the party, and Paul remains passively discontent while Marianne remains at the center, drinking in the healing merriment.

Luca Guadagnino stirred up plenty of sensual evocations helming “I am Love” in 2009 with Swinton as a well-off married woman having an affair with her cook, and he runs the same playbook here, though the scrumptious succulence of food is dialed back in favor of the power of soul-affirming rock. In micro-glimpses into the past we see Marianne prepping for an arena show, looking Ziggy androgynous, and later in a dark subterranean club, something of an amalgam of Joan Jett and Chrissie Hynde. We never really hear her sing; we do see Harry in the recording booth and Paul filming Harry prattling on about his involvement cutting the Rolling Stones’ later albums (thus the intro to Marianne). There’s plenty of drugs and sex from those past decades that gets peppered into the now as the four dine on gloriously prepared sea bream, and Harry Nilsson’s manic, classic “Jump Into the Fire’’ stokes the tension sexual and otherwise, while Harry’s lip-synched bacchanal performance of the Stones’ “Emotional Rescue” sears the sun-soaked joyousness – just before the tenor turns dark.

Early on, Harry mentions the ouster of Brian Jones from the Stones. It turns out to be sharply prophetic barb in haunting, if tangential, ways. The film’s based on a story by Alain Page that had been adapted for the screen nearly 50 years ago with “La Piscine’’ starring Romy Schneider and Alain Delon. The drift from carefree merriment to wants and reveals recalls the crisp, acrid tang of an Antonioni film. In fact, the ambiance at times crackles with embers that seem lovingly borrowed from “L’Avventura” and “The Passenger.”

Overall, the emotions don’t adhere. Swinton, with her glowing, expressive face, holds it together, able to cast anger, joy and compassion with an apt contortion. When she needs her words, it’s a hoarse few words to hang on. Fiennes, on the other hand, shows a looser, wilder side than we’ve ever seen. Not the usual tremulous, demurring Brit, but a hedonistic tour de force who’s seen the world and comes with complex underpinnings that could fill a B-52’s cargo hold. Johnson (daughter of Melanie Griffith and Don) gets a do-over of sorts from the insipid sex thriller “Fifty Shades of Grey.” She’s more prop than part, but she fills the role with daring come-hither that works even if the transitions are a bit of a lurch. The cinematography by Yorick Le Saux, whose crispness underscored “I am Love” and “Clouds of Sils Maria,” gets to spread his wings more than in his past efforts. The shots tailing Paul’s jalopy of a jeep along a mountainside goat path, or the atmospheric pullout from the swimming pool during a pivotal scene are beguiling and breathtaking in ways you’ll never ever see from Hollywood this summer. Everything about “A Bigger Splash” (the title taken from David Hockney painting) is juicy and succulent and over-ripe. It’s an embarrassment of riches that gets close to the point of going over the edge, but the cast (of which, most get to go full frontal) rein it back in to the base human elements we can’t all afford to indulge in with our landlocked budgets.