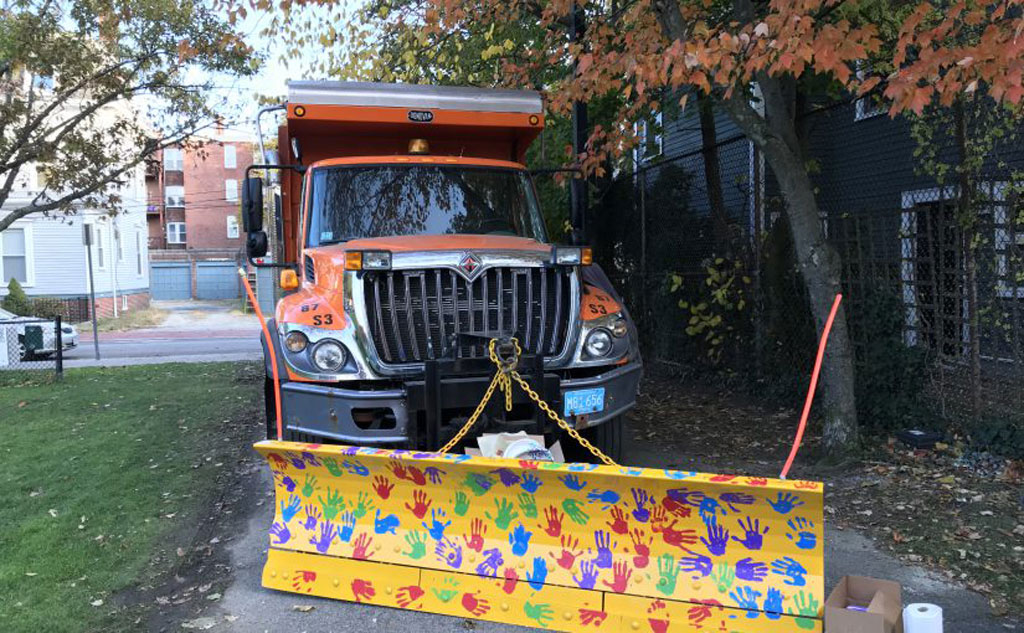 City snowplows will hit the streets this winter decorated through the Paint-a-Plow Program. (Photo: City of Cambridge)

What does Envision Cambridge suggest about climate and the environment?

Will the Cambridge school day get longer?

School Committee, 6 to 8 p.m. Tuesday. The committee will hold a roundtable (with no votes or public comment) discussing learning and professional time and the length of the school day; a longer school day could allow for more instruction – such as long-promised world language courses. Televised.

Will East Cambridge get a new registered marijuana dispensary?

Planning Board, 6:30 p.m. Tuesday. The Lechmere Rug Co., 200 Monsignor O’Brien Highway, at Lechmere in East Cambridge, is set to become an Ascend marijuana dispensary; five updates and some final plan approvals in the Cambridge Crossing neighborhood are due for a look as well. Televised.

What changes (including affordable housing) are coming to Kendall Square?

Cambridge Redevelopment Authority, 4 and 5:30 p.m. Wednesday. A project at 325 Main St. will get a look from this board overseeing Kendall Square, followed by a regular meeting at 5:30 p.m. to talk about the lower-cost “innovation space” planned for 245-255 Main St.; a possible housing improvement project at 71 Cherry St.; and a $300,000 affordable housing site improvement grant request for improving the 45-unit Linwood Court at 243 Broadway and adding 23 affordable units (10 of which will be “workforce housing” at a higher rate that is still below market).

The agency meets today only in the second-floor conference room of the Broad Institute, 415 Main St., Kendall Square.

How will the Cambridge Bicycle Plan be updated?

Cambridge Bicycle Committee, 5:30 to 7:30 p.m. Wednesday. The city’s bicycle plan will get an hour of review and brainstorming on updates and outreach – important considering how the gap between how city planners intended for the existing plan to be taken (aspirational) and how bicyclists took it (as actual goals).

The committee meets in the fourth floor conference room of the City Hall Annex, 344 Broadway, Mid-Cambridge.

Is it safe to have freight trucks rolling through crowded Cambridge streets?

Urban Freight Forum, 9:15 a.m. to 12:45 p.m. Thursday. Speakers from the freight industry, the public sector and academia will talk about the movement of goods in a city that has seen recent fatalities from trucks.

The forum is held in the lecture hall at the Cambridge Main Library, 449 Broadway, Mid-Cambridge

How can the city change its zoning to best accommodate marijuana uses?

Ordinance Committee, 1 to 3 p.m. Thursday. This committee run by city councillors Dennis Carlone and Craig Kelley will continue a discussion on changing the city’s zoning for marijuana-related uses. Televised.

How can we help children learn math skills?

What will snow removal operations look like for the winter of 2018-19?

The committee meets in the fourth floor conference room of the City Hall Annex, 344 Broadway, Mid-Cambridge.

How will the official vote count change the results of Tuesday’s election?

Board Of Election Commissioners, at 2 p.m. Friday. The commission plans to count provisional and overseas ballots so it can present official results from Tuesday’s general election.

The board meets at 51 Inman St., Mid-Cambridge.