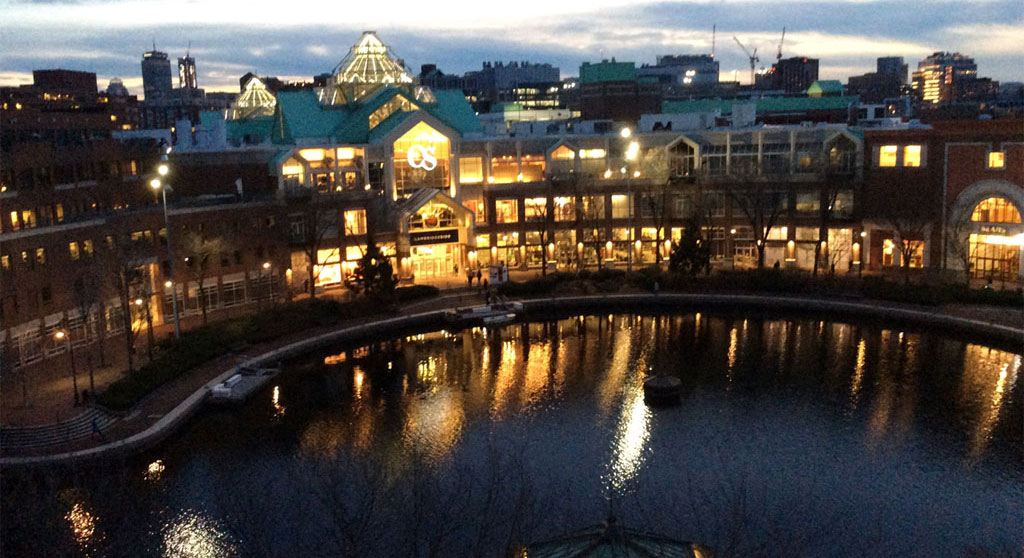 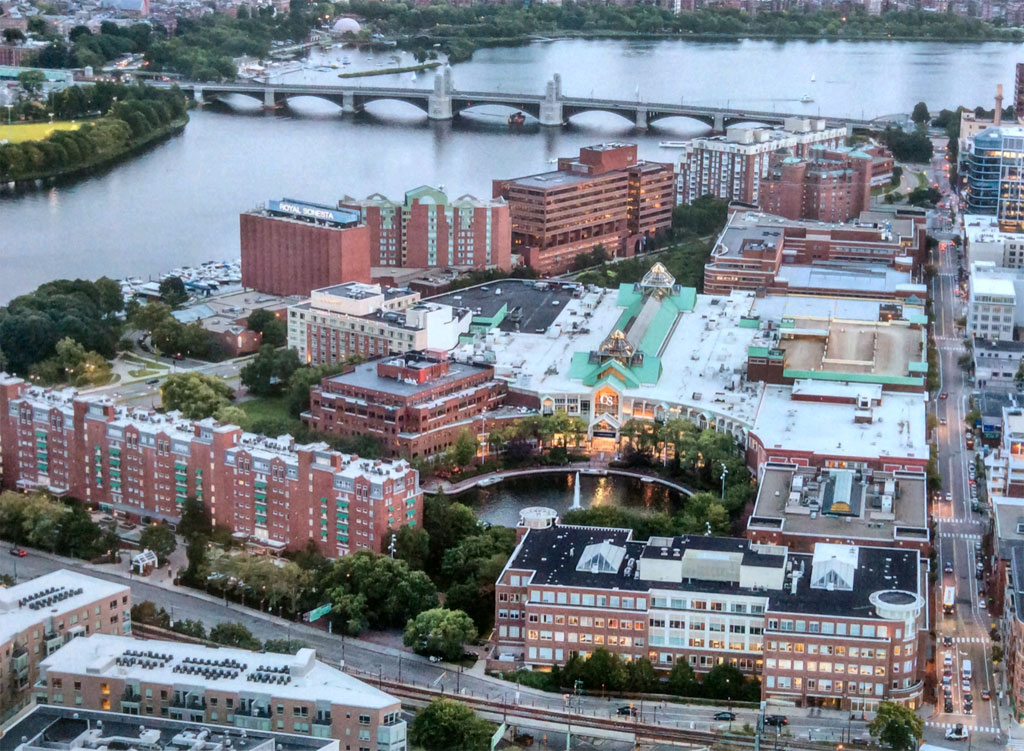 CambridgeSide, seen looking south to its similar heights and red brick, is the realization of an award-winning 1978 urban design. (Photo: New England Development presentation from August)

All great cities have areas they protect for their beauty: Central Park, Boston Common, St. Mark’s Square in Venice. The CambridgeSide mall and Canal Park resulted from the East Cambridge Riverfront Plan of 1978. It has won four design awards, and the city established zoning to protect its character. It is a reason for great civic pride – it is world-class urban design.

But back in February, New England Development petitioned the city to rezone the CambridgeSide mall area to allow towers that are higher than current zoning allows. The majority of total square footage will be devoted to lucrative office and lab space renting at rates more than 400 percent higher than the current retail space. The developer’s key argument for rezoning has been to “save the mall” from the impact e-commerce has had on bricks- and-mortar retailers; opponents questioned whether breaking zoning rules is truly necessary for survival. 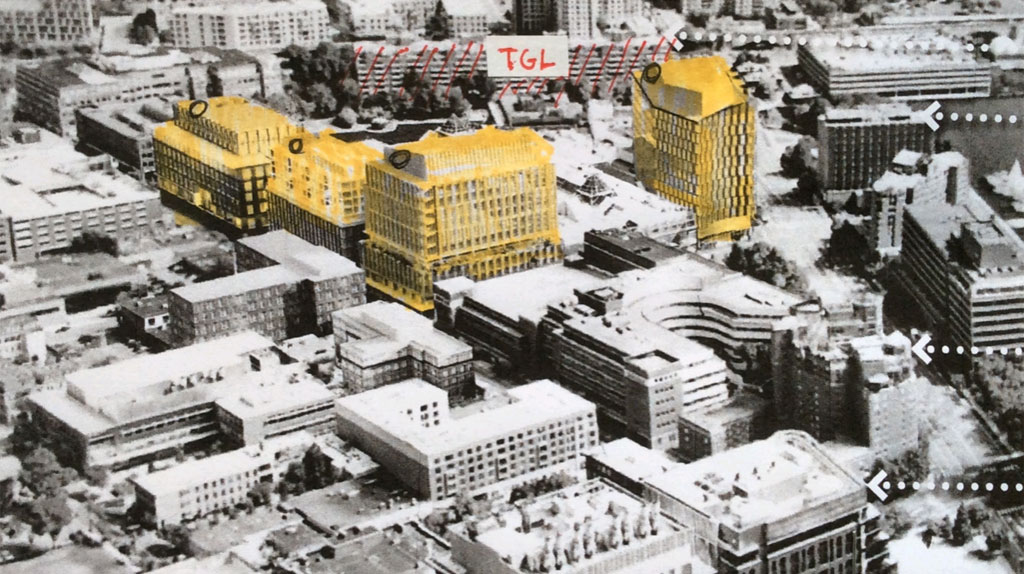 The yellow buildings below show what New England Development wants to do to the city’s Riverfront Plan.

At the time of the original petition, CambridgeSide didn’t even need the proposed high rises. New England Development can add 275,000 square feet by converting its unwanted above-ground garage into offices or labs. How could a remaking of the mall not be profitable with four times the rental income? If New England Development can get more rent per square foot, why does it need more square feet?

(In the end, New England Development’s misleading claim backfired. Recognizing the unnecessary height, the Planning Board used contract zoning to get the developer to use some of that square footage for 80-plus units of affordable housing. The only way to stop the high rises now is for at least four city councillors to vote no.) 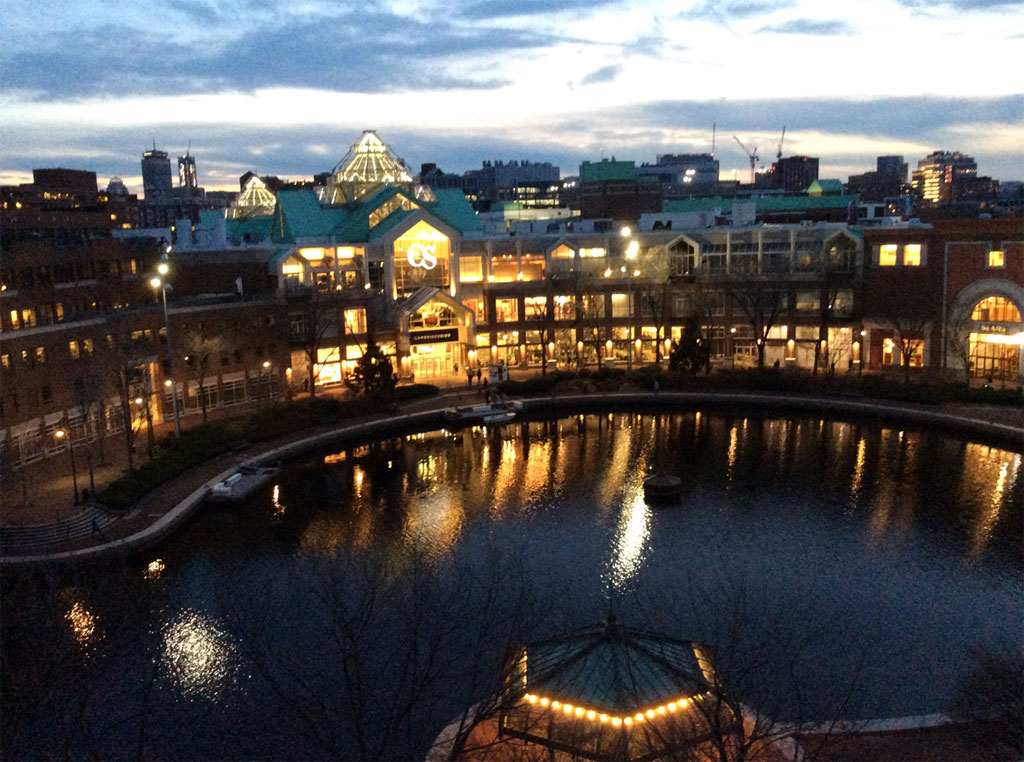 The mall lies on a park, reflected in a sparkling canal, characterized by low-lying architecture, terra cotta brick and greenery, and topped by diamond lights at night. It’s a haven for families and runners, gulls and geese. With its 85-foot cap, the mall blends with neighbors and doesn’t bar the sky. City fathers planned this spot for posterity. The mall is not just another commercial site; it is a jewel of Cambridge.

The developer’s visual, above, shows how the area would look if the requested high- rises were built – crowded and overbuilt. It would be a very dense area, with horrific traffic and hundreds of transient strangers – not the best place to raise children. There is only one Canal Park with its low-lying buildings. We shouldn’t spoil it. We can build towers elsewhere.

Marlene Lundberg is a retired corporate credit analyst with 20 years of experience in financial analysis in New York City – three at Value Line Investment Survey and 17 years at the National Association of Insurance Commissioners, an organization for state government insurance regulators.