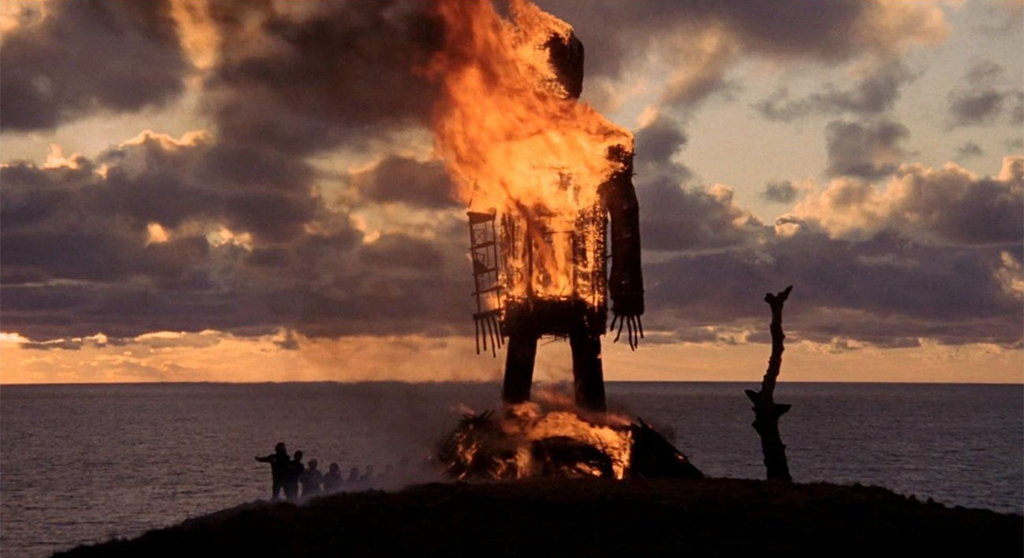 Jonathan Glazer, whose résumé is brief but impressive (“Birth” and “Sexy Beast,” below), spent nearly a decade trying to make Michael Faber’s sci-fi novella about aliens who farm humans as a food source, shipping the harvest back to their home planet as off-world culinary delectables. It’s an eerie glide, macabre and, at times, brutally grim. Glazer’s realization of the alien predator in out midst? Scarlett Johansson as a fetching waif trolling the streets of Glasgow for johns with no friends or lovers (no attachments, no strings) waiting at home. Mica Levi’s score deepens Glazer’s gripping visual abstraction, and Johansson is more than effective as innocent victim and cold, calculating killer.

Glazer’s brilliant reimagining of of the crime drama is character and performance driven, with a capital C and P. Ray Winstone plays the title entity, soaking up the sun on the Spanish coast when a former crime boss played with gleeful lethality by Ben Kingsley – something of the murderous diametric opposite of his “Gandhi” – wants to pull him in for one last job. “No” is not an option. How the plot moves and spans time is poetic, despite eruptions of great physical or emotional violence – like a hazy, sun-infused dream. It’s super tight filmmaking, bolstered by dead-on performances by Winston, Kingsley (in a career topper) and the rest of the impressive ensemble. The score by Roque Banos drives the mania with an apt ska beat. This is stiff-upper-lip British machismo on crack, and one of the best British mob films ever made, right there alongside “The Long Good Friday” (1980) and “Get Carter” (1971).

The free love-infused cult classic about pagans staging a bacchanalian orgy each spring is impossible to shake, especially after a first viewing. The quirky arthouse horror gem stars Edward Woodward (“The Equalizer”), Christopher Lee (“Dracula,” “The Man with the Golden Gun”) and a doe-eyed Britt Ekland (a Bond girl in “Golden Gun” who also appeared in “Get Carter”) and is tinged with the occult from the onset.“Wicker Man,” the first of only three features directed by Robin Hardy, is a must see for cult-film enthusiasts – you’re not one without this one on your CV. You can skip the 2006 remake by Neil LeBute (“In the Company of Men”) starring Nicolas Cage and Ellen Burstyn (“The Exorcist”) – uninspired execution, and an unwise idea to start with.

Similar in texture to “The Wicker Man,” this follow up to “Hereditary” (2018) by Ari Aster is just as offsetting and grim – nay, gruesome – in its own right as a bunch of postgrad archeological students in pursuit of thesis material and folkloric fun take hallucinogenics and drop in on the wrong Swedish village. Be careful what you eat at the smorgasbord! Like “Hereditary,” a slow unnerving burn. (Read the full review from July 3, 2019.)

Jeff Stern’s passionate chronicle of the rock band The Who is a certifiable mess, and a glorious one at that. From the band’s self-deprecating early days to its hedonistic, signature smash-the-stage performances, Stern gets it all there in chaotic shards – and that’s okay, because among the mayhem there’s limitless gems: Ringo Starr and Keith Moon near smashed, telling kiddies they’re not quite cut from the Donnie and Marie cloth, the group’s epic “A Quick One While He’s Away” (part of the legendary “Rock and Roll Circus” production) and Moon singing “Barbara Ann.” A must-see if you’re a fan and a mind-blow if you’re not. Classic performances abound, driven by energy and a synergy that’s beyond perfect.

Not what you’d think is a great family movie, but it is. Silly, sophomoric and maudlinly sweet, “Asians” is something of a fairytale with Constance Wu (“Fresh Off the Boat,” “Hustlers”) as a NYC academic dating a handsome colleague (the hunky Henry Golding) who hasn’t quite shared with her the nature of his Singapore-based family’s net worth (it’s crazy!) until they’re on a flight overseas for a wedding. Wu’s Ph.D. in economics doesn’t cut it with mom (Michelle Yeoh). It’s a quiet struggle that goes on behind all the opulent pageantry (and amazing food) with comic relief provided by comedian/rapper Awkwafina (“The Farewell”) as Wu’s bestie from college and Ken Jeong (“The Hangover”) as her tacky, nouveau riche dad. (Read the full review from August 15, 2018.)

Awkwafina’s follow up to “Crazy Rich Asians” answers the question, “can she act?” emphatically, as her Billi, a frustrated, out-of-work New York writer, heads to China for her grandmother’s inevitable passing. As one ingrained traditionalist notes, “Chinese people have a saying: When you get cancer, you die.” To create a veil around family members gathering, they stage a fake wedding. In the lead-up, Billi struggles with her Americanism versus the family’s traditional ways. Punctuated with melancholy, rue and joy, the film notches an earnest emotional journey with pleasant turns to boot. Awkwafina serves notice, but the rest of the ensemble is spot on too, especially Shuzhen Zhao as the grand matriarch kept in the dark. (Read the full review from July 10, 2019.)

Jean Seberg, an American-born actress famous for pairing with Jean-Paul Belmondo in “Breathless” (1960) and a face of the French New Wave, also became a major subject of the FBI in the late ’60s when she took up with Hakim Jamal, a radical activist with ties to the Black Panthers. The film picks up in 1968 with the actress (Kristin Stewart) giving support to Jamal (Anthony Mackie) in a shoutout with a flight attendant. On the tarmac Seberg raises her fist in solidarity, and the two becomes lovers. Seberg’s French husband doesn’t much care, but the FBI does, as do the Panthers (Seberg is white) and Jamal’s jealous wife. The setup and initial scenes are electric, but the current loses its surge as the characters begin to sink inward rather than rise to face adversity. Mackie is at times commanding, Stewart looks the part with the blonde pixie cute, but she and director Benedict Andrews and the writers feel like they are chasing a myth, not a soul.

Why? Because you can see it on IMDB TV for free and because it’s a spoof of the 1970 disaster flick “Airport” that starred Jean Seberg. Uproariously funny and sharply witty, the script was written by a pool of writers, like a late-night TV show (think SNL). Leslie Nielsen notches the bulk of the laughs as a doctor on an airplane flight doomed by food poisoning. The visual and cultural gags are limitless, and remain mostly relevant and chuckle-worthy across time. The great ensemble spouting Henny Youngman one-liners includes Peter Graves (the original “Mission: Impossible” guy), NBA legend Kareem Abdul-Jabbar, Lloyd Bridges (Jeff’s dad) and Robert Stack. Another good family watch, in that the adult material should surely (don’t call me Shirley!) sail wide of younger ears.

Simply the apex of madcap romcoms; you’ve got a paleontologist, a rare dino bone and a leopard named “Baby” as a pet to a socialite holding the purse strings to fund future digs. Did I mention is stars Cary Grant as the absentminded professor and Katherine Hepburn as the heiress? Both in their prime and on their marks here in this timeless classic directed by Howard Hawks, who was one of Hollywood’s quiet directing greats with other such classics as “Red River” ( 1948), “The Big Sleep” (1946) and “His Girl Friday” (1940) to his credit. Original, freeform and timeless. Another everyone-on-the-couch choice.