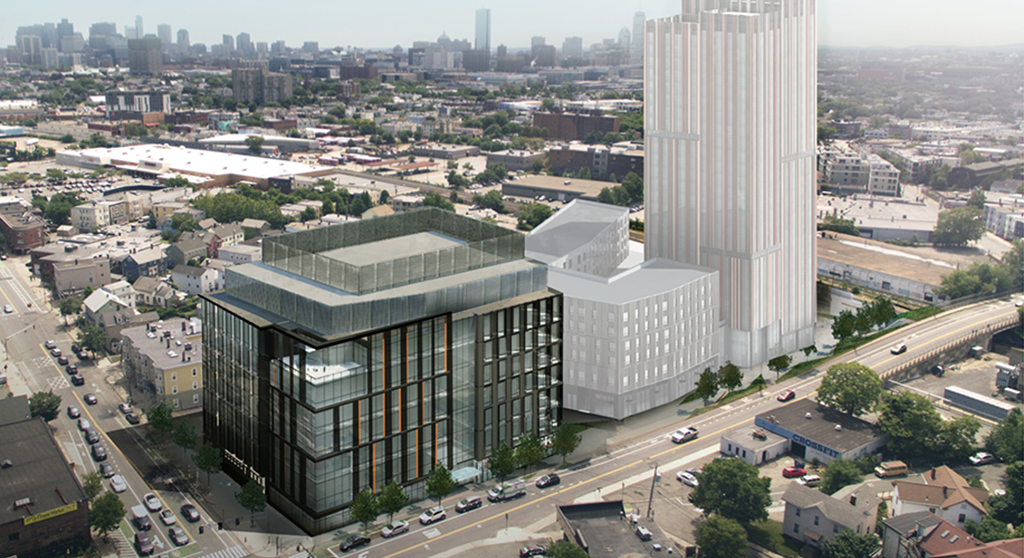 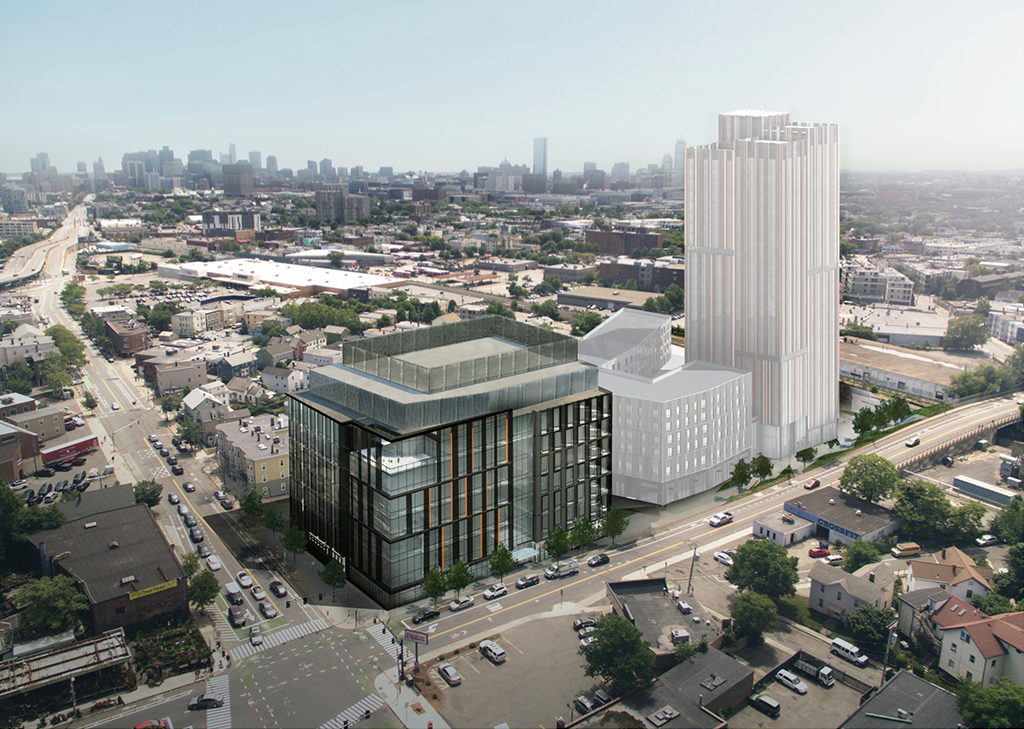 The tower at right expected to overlook the Union Square green line T stop got its building permit Thursday, while the T stop could be in use as early as October. (Image: Union Square Station Associates)

Though the Union Square stop on the green line is expected to open as early as October, elevator access isn’t due until spring of 2022 from its neighboring parcel – a 700,000-square-foot tower development with ground-floor retail, 450 residential units and 269 parking spaces. That site got its building permit just Thursday, and could be under construction into the fall of 2024.

The station is a one-stop spur from the Lechmere stop, which is moving across a highway to Cambridge’s North Point neighborhood from East Cambridge; and it’s accessible from the Inman Square area.

The Union Square stop is getting a staircase down from the Prospect Street Bridge, and when walking from Cambridge into Somerville there will be a ramp to the platform that requires users to double back, an extra 120 yards that caused an outcry in 2019. Ultimately, the developer at the neighboring parcel, Union Square Station Associates, will provide an elevator as well – replacing one that disappeared from state plans in a 2016 financial crisis that nearly canceled the entire project. “The current schedule estimate is that the Union Square developer would complete construction of the public elevator in spring 2022,” said Brad Rawson, director of the Mobility Division for the Somerville Mayor’s Office of Strategic Planning & Community Development.

“The developer agreed to construct the elevator, and the city has collaborated with the developer and the MBTA to coordinate all the challenging construction logistics. Although the overall site can feel expansive, the elevator location is actually quite constrained, and requires complex choreography to allow various stages of the public and private construction to proceed safely and efficiently,” Rawson said.

The 50 Prospect St. mixed-use development is part of a massive Union Square Revitalization Plan, known in planning and zoning terms as the Union Square Coordinated Development Special Permit, and its construction timeline also remains hazy. As approved by Somerville’s Planning Board in December 2017, it includes 933,000 square feet of residential uses for up to 1,000 new homes – of which as many as 200 will be permanently affordable units for existing or recently displaced Somerville residents – and some 157,000 square feet of public space improvements that are to include a 27,000-square-foot neighborhood park and “a significant plaza” connecting the new green line station to the neighborhood.

Typically, there must be shovels in the ground within six months of a building permit being issued, which takes the project to Oct. 29; and a building of the size planned at 50 Prospect St. usually takes two to three years, said Sarah A. Lewis, Somerville’s director of planning and zoning. That could extend work to the fall of 2023 or 2024.

The 50 Prospect St. project is just the one closest to the T stop on a stretch of land along Prospect Street known as the D2 block – four buildings that includes a seven-story office and lab building with ground-floor retail fronting on Somerville Avenue; a five-story general building; a three-story commercial building envisioned as holding arts and cultural uses accessible from the civic space; and the 25-story residential tower by the Union Square stop. The square footage that makes up the D2 block has been cleared and fenced off, ready for construction.

But riders can expect the T stop to be surrounded by construction for a long time – across the tracks from the D2 block is a planned D3 block, where buildings still stand.

For the overall Union Square makeover, “no actual timeline is proposed, as it is intended to evolve with market demands,” Lewis said.