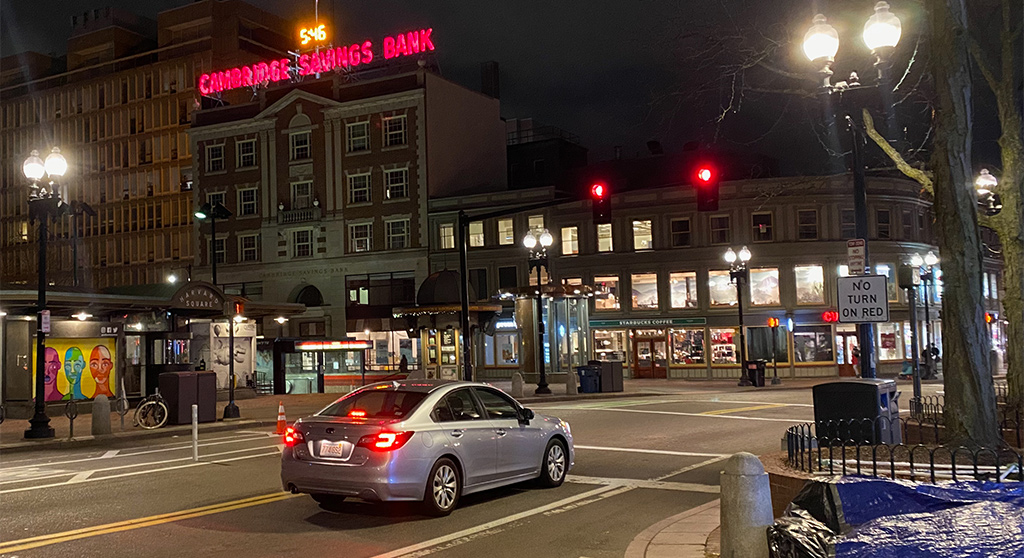 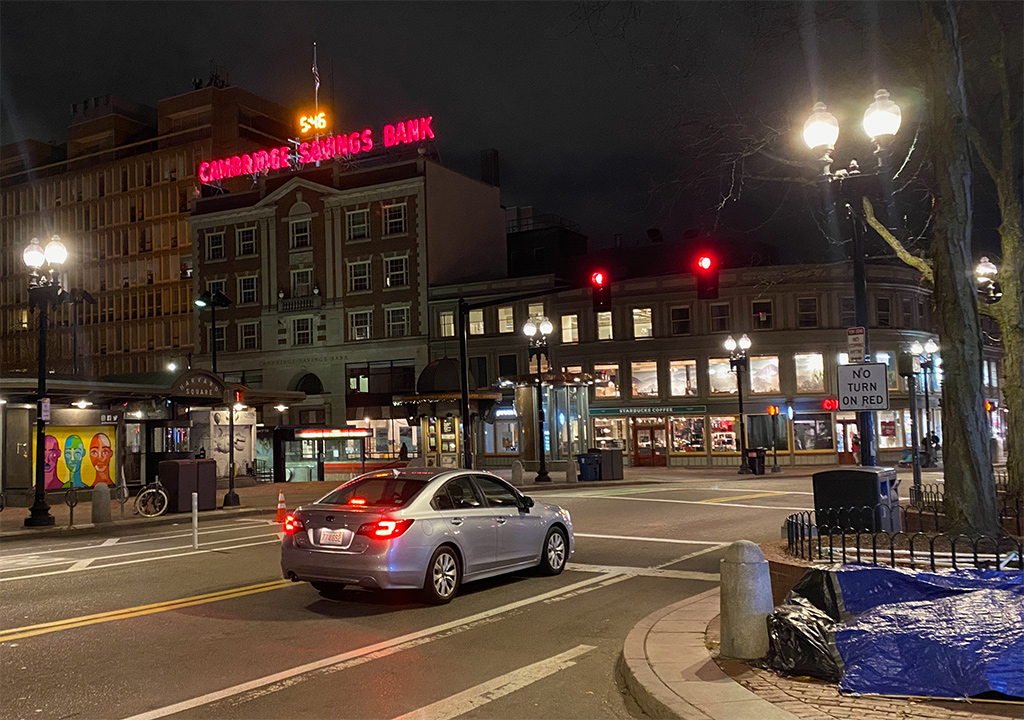 A car heads into Harvard Square in November. A few streets there could close to car traffic at periods under a proposal heard by the City Council in September. (Photo: Marc Levy)

City Council, 5:30 p.m. Monday. The agenda of this meeting seems so fraught that there’s an additional session scheduled (for 5:30 p.m. Tuesday) to continue it if Monday’s goes on too long.

What helps add an element of dread to Monday’s meeting in terms of public comment expected and discussion by councillors to follow is a report from the city’s Future of Public Safety Task Force, which comes with nine primary recommendations around the creation of a Cambridge Department of Community Safety, which would be separate from the police department; eight additional recommendations; four more “areas to consider”; and some “unfinished business and areas of disagreement.” Three councillors, led by Patty Nolan, have a corollary proposal via The Black Response and other groups for ‌a Holistic‌ ‌Emergency‌ ‌Alternative‌ ‌Response‌ ‌Team that they hope the task force will join in evaluating.

Another potential hot-button issue is a petition to change how city Neighborhood Conservation Districts are created and run. It comes from resident Loren Crowe, a dedicated opponent of the East Cambridge Neighborhood Conservation District now being weighed by a Historical Commission group under the process he hopes to change. And then there’s the return of a resolution and policy order that wade in to a Middle East conflict, including calling for the city to stop doing business with Hewlett-Packard because of the use of its technology by the Israeli government to “biometrically track Palestinians, deny them access to water and health care in the Gaza strip and imprison them without access to fair trial.” Nearly 70 people gave public comment on the topic last week (each given two minutes to speak) before Nolan stopped council discussion to give even more people a chance to talk this week (because last week was a religious holiday that would keep observant Jews from calling in).

There’s also a proposal to amend zoning to insert language on sustainable design and development; and the city manager is asking for $800,000 to buy more land in Lincoln around the city watershed, protecting our water supply (and reporting that we got a $115,680 grant to “remove Per and Polyfluoroalkyl Substances” from what we drink). The manager also wants to go to the state Legislature to permit a $20,000 personal property tax exemption for residents, similar to the $10,000 exemption in place as of this fiscal year for small businesses. It meant 1,194 small businesses didn’t get a personal property tax bill.

Getting to net zero, and greening municipal buildings

Health & Environment Committee, 3 to 5 p.m. Tuesday. This committee run by city councillor Quinton Zondervan expects to discuss proposed amendments to a “Building Energy Use Disclosure Ordinance” that could drive down energy use and emissions in existing buildings in Cambridge, as well as check in on the Net Zero Action Plan five-year review process. Televised and watchable by Zoom video conferencing.

How schools check in with their students

Planning Board, 6:30 p.m. Tuesday. The board expects to hear from the Department of Public Works, the Water Department and from Eversource Gas and Eversource Electric about their work in the city now and in the future. Televised and watchable by Zoom video conferencing.

Testing cutoff of traffic to some Harvard Square streets

Neighborhood & Long Term Planning, Public Facilities, Arts & Celebration Committee, 10 a.m. to noon Wednesday. This committee run by city councillor Patty Nolan plans to look at trying out some street closings in Harvard Square – a timely topic, considering that a similar idea for Central Square has just been sent by the council to the city manager. The reappointment of Conrad Crawford to the Cambridge Redevelopment Authority Board is also on the agenda. Televised and watchable by Zoom video conferencing.

City Council special meeting, noon Wednesday. Councillors hold their second session about review and possible reform of the city’s Plan E charter, the city manager form of government Cambridge adopted in 1940. This meeting is expected to discuss a charter assessment by the council’s advisers on the issue, the Collins Center for Public Management at the University of Massachusetts at Boston. (The Collins Center will present first.) Cambridge’s charter has not been looked at seriously since adoption, making Cambridge “the only city or town in Massachusetts to go 80 years without reviewing its most important legal document,” while most review their charters every five to 10 years, said councillor Patty Nolan, who led the charge for charter review. Nolan said she has been “thinking for many years that we owed it to ourselves to consider whether there was a better way to organize our city government.” This meeting was canceled May 25, 2021, because a notice with agenda items was not posted at least 48 hours in advance, as required by Open Meeting Law.

What summer programs will be offered to students

School Committee Special Education and Student Supports Subcommittee, 5 p.m. Wednesday. Members plan to get updates on what summer programs are available to kids and strategic planning for the fall, and hear an update on outstanding evaluations. Watchable by Zoom video conferencing.

Yet another License Commission mystery agenda

License Commission, 9 a.m. Thursday. No agenda has been posted yet, making the third time since at least mid-April. This commission continues to be the only city body that can’t manage to come together on the same time and day from one week to the next or account for its business ahead of a legally mandated period. But the commission answers to no one. Watchable by Zoom video conferencing.

This post was updated May 23, 2021, with information about a noon Wednesday council meeting about charter change.