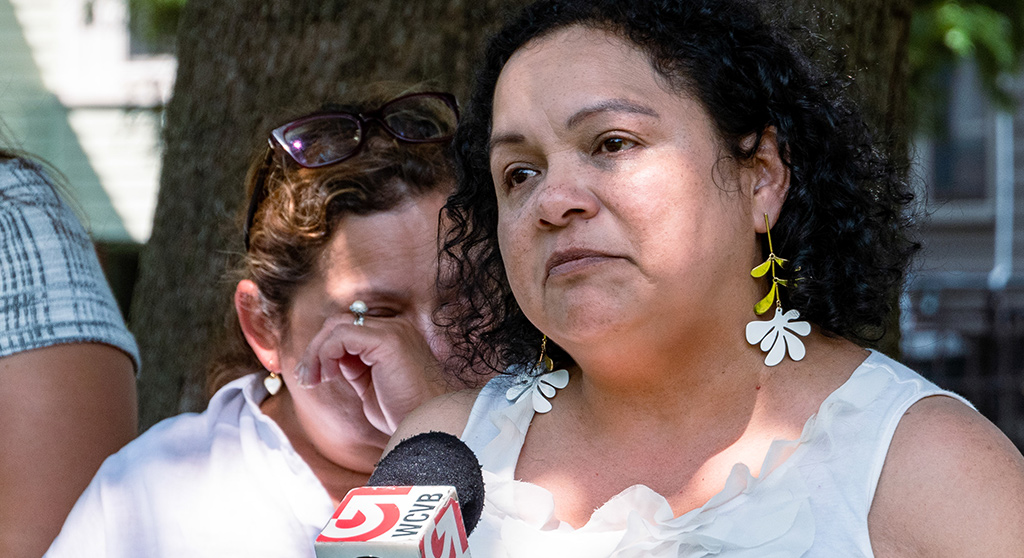 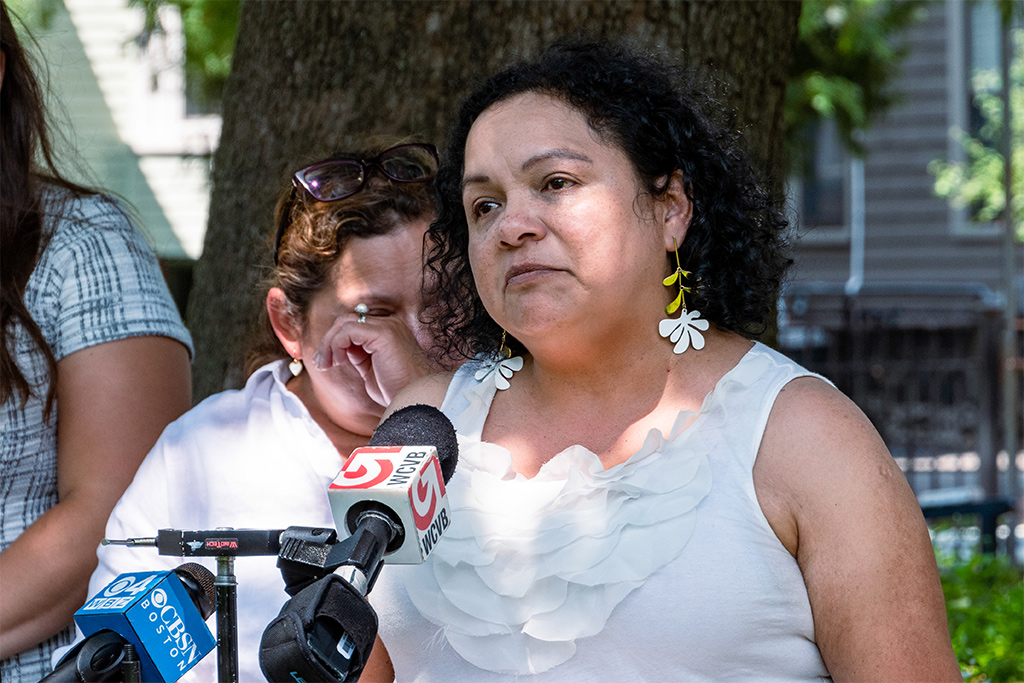 Dora Gallardo, daughter of Romelia Gallardo, speaks at a Thursday press conference at Dana Square Park about her mother’s death in 2018. Behind her is sister Eleonora Mazariegos. (Photo: Tyler Motes)

The families of two Cambridgeport pedestrians who were killed by vehicles in 2018 have sued the drivers accused of running over them. One driver had been acquitted of a criminal charge of negligent driving and the other awaits a resolution in criminal court.

The pedestrians, Jie Zhao, 27, and Romelia Gallardo, 80, lived within a half-mile of each other and died a month apart in incidents that aroused outrage. Zhao’s stepfather and Gallardo’s daughter now have both filed wrongful death lawsuits against the drivers and others. On Thursday, two of Gallardo’s daughters held a press conference at Dana Square Park to announce their suit. The press conference brought new attention to both pedestrian deaths, and Cambridge Day discovered the Zhao family’s suit in court records.

Zhao, who had recently bought a condo on Chestnut Street, was hit by a dump truck backing through the intersection of Putnam and Magazine streets Oct. 5, 2018. The truck stopped after backing over her and then went forward, crushing her twice.

The driver, Daniel Desroche of Methuen, was acquitted of negligent driving by a jury in Cambridge District Court on Nov. 21, 2019. His attorney had argued that Desroche couldn’t be found negligent because he had asked the driver of another dump truck behind him to check the intersection before he backed up. The jurors agreed.

On Sept. 6, 2018, Gallardo was returning from grocery shopping, rolling her walker in the parking lot of LBJ Apartments on Erie Street, the public housing development for elderly and disabled tenants where she lived, when a car allegedly driven by Ashley Monturio of Pembroke hit her on its way out of the lot. The car stopped after the front wheels struck Gallardo, then continued, causing the rear wheels to run over her, the lawsuit by her family alleges.

Monturio called 911 but said she thought Gallardo had merely fallen. She left the scene without identifying herself to emergency dispatchers, saying she needed to get to a job interview, according to police reports at the time and her family’s suit. She reportedly turned herself in after police found her license plate number on surveillance video. The charge against her was later reduced to a misdemeanor from a felony without explanation.

“Left to die on the pavement” 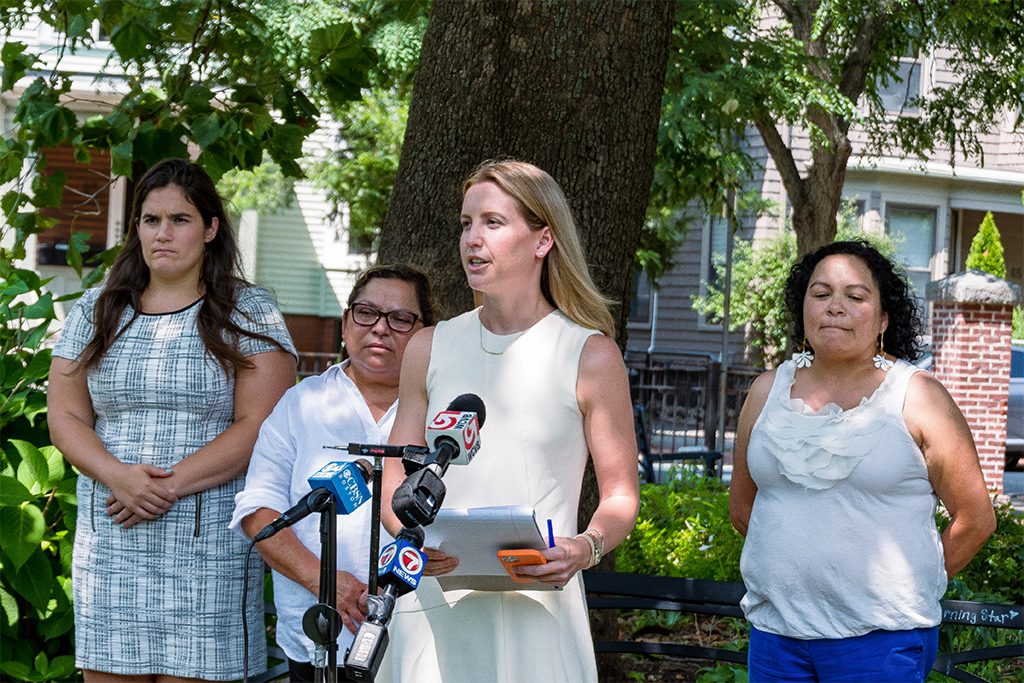 At the press conference Thursday, Dora Gallardo of Somerville and Eleonora Mazariegos of Woburn, Romelia Gallardo’s daughters, tearfully recalled their grief at not only losing their mother but at the manner of her death. Knowing that “she was left to die on the pavement,” alone, caused “enormous pain to me and my family,” Dora Gallardo said. “Our hearts are broken over the way our mother was left to die alone,” Mazariegos said.

The family chose Dana Square Park for the press conference because Romelia Gallardo often walked the three blocks from LBJ Apartments to the park to drink a cup of coffee and “watch the children play,” said Victoria Mair, the attorney handling the lawsuit. The daughters said it was their mother’s favorite park.

Dora Gallardo, personal representative of her mother’s estate, filed the suit Wednesday in Middlesex Superior Court. It claims that she, her sister, her two brothers and her mother suffered damages as a result of Monturio’s actions. It also names Monturio’s husband, Michael Monturio, who owned the Infinity QX60 SUV that allegedly hit Romelia Gallardo.

On Thursday – the day after the suit was filed – no attorney for Monturio and her husband was listed and it didn’t appear that the Monturios had received a copy of the complaint.

In Zhao’s death, Scott Briscoe, Zhao’s stepfather and the personal representative of her estate, filed a wrongful death suit on behalf of her mother, Lefang Briscoe, and her father, Shao Min Zhao, on Nov. 22, 2019, the day after Desroche was acquitted. It names Desroche; his wife, Jennifer, who owned his truck; Patrick Annese, the truck driver traveling behind him; and Brox Industries of Dracut, which employed Annese. The trucks were bringing asphalt to a City of Cambridge project repaving Pearl Street.

The city wasn’t named in the suit and even if it had been, municipalities are exempt from liability in some cases; in others, plaintiffs cannot win more than $100,000. Still, the city is an “interested party.” It sought successfully to keep witness information, audio of 911 calls, medical information and other “confidential information” possessed by the Cambridge Police Department out of the public court records. The parties in the case can see the information.

All parties in the case requested the protective order. Much of the information may have been in public files in the criminal case filed against Desroche; those files contained the names and phone numbers of witnesses plus summaries of what they told officers, for example.

In answers to the Zhao family’s suit, Desroche and his wife denied negligence and said that if they were negligent, Zhao bore greater responsibility. Annese filed a similar answer. The most recent filing in the case was on May 21, according to the court docket.