Respect for warriors, not war, at ceremony

Respect for warriors, not war, at ceremony 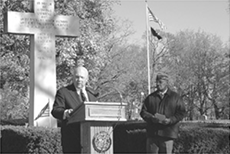 The growing death toll in Iraq and the ensuing outrage were touched on in speeches at the city’s Veterans Day ceremony, but had no apparent effect on attendance.

Like most such events in recent years, the local observance — held Friday morning at the World War I Veterans’ Monument at Cambridge Cemetery — was solemn but sparsely attended, loaded with city officials, police, firefighters and veterans, light on others. Perhaps fewer than 100 people were gathered, and there were no protesters.

They would have been redundant at an event with a keynote speech given by Laurence D. Fitzmaurice, president and chief executive of the New England Shelter for Homeless Veterans, about the tragedy of his role.

“We should be an anachronism. We should be a dinosaur,” Fitzmaurice said. “It would be nice if it weren’t necessary for people to go through our facility.”

Although the trappings of the event were familiar — bagpipes playing “Amazing Grace,” a rifle volley, a wreath-laying, performances of “God Bless America” and taps — there were also pointed allusions to the carnage going on far away from the cold, crisp quiet of Cambridge Cemetery.

“We fully expect to see new visitors to our facility” from the war in Iraq and fighting in Afghanistan, he said. The shelter is transitional and intended to keep soldiers sober and mentally healthy on their way back into society, after the shock of war has sent some into downward spirals.

The speakers noted that Gov. Mitt Romney has named November “Hire a Veteran Month” and, also Friday, signed into law a package of increased benefits for the military intended to provide educations for members of the commonwealth’s National Guard and to help with money to bury loved ones, survive without them or nurse them back to health.

The crowd applauded the announcement, but vice mayor Marjorie Decker, wrapping up the event in the same way Mayor Michael Sullivan began it, said elected officials “shouldn’t be applauded for doing the right thing.”

She recalled visiting the Vietnam Veterans Memorial, in Washington, D.C., with her father — a veteran of two tours in Vietnam — and crying not for the dead whose names appeared on the Wall, but “for those who still live among us and aren’t cared for and embraced as they should be.”

There were bowed heads and a benediction. A veterans’ services official said simply, “These proceedings are over.”

And the small crowd broke up.

More: Veterans strong, but silent publicly, on feelings about Iraq