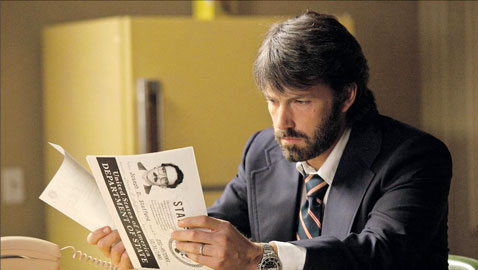 While the Terrence Malick-directed “To the Wonder” in which Affleck stars (albeit with 10 or fewer spoken lines) is getting boos at its screenings, Affleck’s own recounting of a true tale from the 1979 Iranian hostage crisis is getting cheers from all sides.

“Toronto premiere of ‘Argo’ leaves locals cheering,” the Los Angeles Times said, but maybe that was just because the film wears its love for Canada on its sleeve? Assuredly not, since Huffington Post is talking about how “Ben Affleck’s Comeback Is Complete,” The Village Voice agrees “Ben Affleck Is Back On Top” and Moviefone’s website feels it’s necessary to explain how Affleck “Went From Laughingstock To Respected Filmmaker.” Probably because “Argo” is, as The Wrap says, “a sharp and seamless work of expert mainstream filmmaking … Affleck ratchets up the tension mercilessly … a good yarn and a hell of a ride” and the International Business Times is talking about how “Argo” is earning raves and “fast becoming one of the fall’s most anticipated films.” Finally, good lord, check out how Vanity Fair knows from a screening that Affleck has a hit on his hands:

generous applause following the film, the fact that the at-capacity audience lingered for the credits, and the laughter — yes, the laughter — heard throughout (particularly during a clever subplot). [The] suspense builds steadily until, as I noticed in the film’s final 15 minutes, nearby audience members, unable to take it, started holding their breath and squirming. Following “Gone Baby Gone” and “The Town,” “Argo” cements Affleck’s standing as a skilled Hollywood filmmaker. He is clever with his dialogue, spare with his camera work, and just understated enough in his performance.

The U.K. Guardian has — perhaps rightfully, given its name — the most guarded review, but it’s clear critic Henry Barnes likes the movie despite not wanting to. “This fantasy does have its excitement. The chase ending is jarringly false, but it pushes the story to a heart-racing conclusion,” is a sample of his analysis, although he warns in something of an odd construction that “there’s a danger that its chest-beating could drown out the strength in its subtleties.”

In other Affleck items, he talks to The Boston Globe how disappointed he was in himself for holding back during his kiss with Jason Lee for Kevin Smith’s 1997 “Chasing Amy.” “I just blew it,” he said.

Michael Angelakos, writer and singer for Cambridge electropop band Passion Pit, is doing well since canceling shows to deal with depression, and so is the band, according to keyboardist and guitarist Ian Hultquist in the Phoenix New Times: “Everyone is in pretty much good spirits, and we made it through a two-week around-the-world run and everyone came out alive and happy, so everyone’s doing a lot better.” But Huffington Post’s Sheena Lyonnais still takes Angelakos as one of her prime subjects in asking “Does Glamorizing the Tortured Artist Kill Creative Souls?” Lyonnais outlines ways in which Passion Pit is breaking ground in merging music and technology, innovation that can’t really be credited to the songwriter, before adding heft to the argument tortured artists actually make interesting work:

In great detail, he described a past suicide attempt, the crimson water in the tub inspiring lyrics on the band’s Gossamer album, which dropped in July. In “Where We Belong” he sings, “Then I’m lifted up/Out of the crimson towel/The bath begins to drain/And from the floor he prays away all my pain.” It sounds so pretty when he’s singing it, it’s easy to let the meaning slip by.

There’s also a free download in the offing, as Gigwise talks about St. Lucia’s remix of Passion Pits’ “Constant Conversations,” to which the pop artist “adds a few extra electronic flourishes to the track on his remix, leaving the pace of the original track intact.” (A video version of the remix is above.)

Sam Waterston, a board member of the marine conservation group Oceana as well as an actor in Aaron Sorkin’s television show “The Newsroom,” joined marine experts in Wales to talk about the impact of overfishing on the oceans, Wales Online reported. His “enthusiasm for marine conservation [is] a passion he said began when he read a newspaper report about the decline of cod in his native Massachusetts.”

Matt Damon was among the stars at the third Stand Up to Cancer telethon Friday.