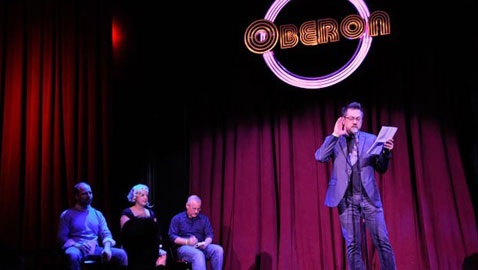 Authors at Literary Death Match events get seven minutes to read from their work. (Photo: Oberon)

On the way to proving books can be a fun on television, Todd Zuniga first proved books could be fun onstage. He’s proving it again Wednesday in Harvard Square.

His Literary Death Match has been called “the greatest reading series ever” by the Los Angeles Times and been produced in 43 cities around the world. And it sold out in June but returns to Oberon to kick off a seven-city, 10-day tour on the way to filming a two-part television pilot.

In Literary Death Match, four authors perform their most electric writing in seven minutes or less before an audience and a three judges. There are instant critiques and even some games (Pin the Mustache on Hemingway, for example).

As described on Kickstarter, the pilot — which is still looking for funders — is to star Michael C. Hall (“Dexter”), Susan Orlean (“The Orchid Thief”), musician Moby, writer/director Diablo Cody (“Juno”) and comedian/author Jenny Slate (“Marcel the Shell with Shoes On”). The local show Wednesday isn’t quite as starry, but includes Baratunde Thurston, The Onion’s former digital director, co-founder of Jack and Jill Politics and author of “How to Be Black”; Pulitzer traveling fellowship winner Molly Birnbaum, author of “Season to Taste: How I Lost My Sense of Smell and Found My Way”; Carissa Halston, author of of “A Girl Named Charlie Lester” and “The Mere Weight of Words” and host of Literary Firsts, described as “the sexiest reading series in Cambridge”; and Ori Fienberg, writing instructor for Foundation Year. The executive producer is Kristen Sims.

The judges include musician/comedian/performance artist Rob Potylo, featured on VH1’s “Best Week Ever” for his single “I Put a Baby In You” and more recently the creator/star of the Web series “Quiet Desperation” and Bethany Van Delft, comedian and co-founder/producer of “Colorstruck: Women of Color in Comedy.”

This event is 21-plus, with drinks afterward. Tickets are $12 as a preorder or $15 at the door. Preorder tickets are nonrefundable but can be transferred one time to another person or for a same-priced event.