For Ig Nobel Prizes in anatomy, other fields, scientists happy to be the butt of the joke 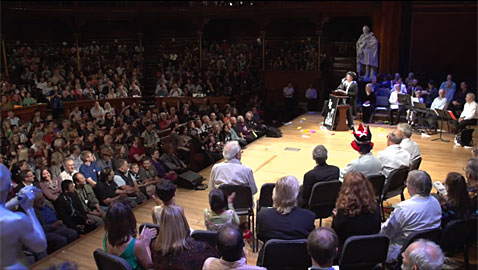 For Ig Nobel Prizes in anatomy, other fields, scientists happy to be the butt of the joke

The theme of Thursday’s Ig Nobel Prizes award ceremony was as broad as science itself: “The Universe.” But for those who think the universe isn’t very funny, the ceremony gave away two prizes in an area that never fails to amuse: the bottom.

Two French scientists won the Ig Nobel in medicine for advising doctors who perform colonoscopies how to minimize the chance that their patients will explode.

And the Ig Nobel in anatomy went to two scientists from The Netherlands and United States for discovering chimpanzees can identify other chimpanzees’ faces from seeing photos of just their rear ends.

“It’s not an inborn capacity. They have to learn it,” explained Frans de Waal, the C. H. Candler Professor of Primate Behavior at Emory University, as quoted in The Harvard Crimson. Like eight of the other 10 winners, de Waal traveled to Harvard Square for the Sanders Theatre ceremony on his own dime for the pleasure of honoring science with a sense of humor. They also got to explain their contribution to human knowledge, so long as they kept it to 60 seconds — a time limit enforced by a pair of 8-year-old girls charged with letting the honorees know that at 61 seconds, they were bored. Bored. Bored.

“This is a moment we could laugh at it,” de Waal said. “Although these are good studies.”

The winners, in fact, came from five continents to accept for work on the physics of ponytails, how to make talkative people shut up and why we spill coffee, among other things, and among the 1,200 people watching, laughing and flying the traditional paper airplanes from the theater’s seats were several media members and fans from overseas.

It is a less happy tradition, all too well known by Marc Abrahams, the event’s organizer and master of ceremonies, editor of the inspiring science journal the Annals of Improbable Research and author of the new book, “This Is Improbable,” that science, scientists and even science humor is a bigger draw to international audiences than to mainstream Americans. The ceremony, which was webcast live on YouTube, was watched by a crowd of 400 gathered overnight in a theater in In Leiden, The Netherlands. And the prizes are the subject of an upcoming documentary series called “Quand la Science Fair Rire” on the France 5 public television network.

In the United States, though, an edited recording of the ceremony will be broadcast on National Public Radio’s “Science Friday” program the day after Thanksgiving. Abrahams also gets some credence as an expert on what he calls “achievements that first make people laugh, and then make them think,” to the extent that he was the go-to expert for the Sept. 15 “Bluff the Listener” segment on NPR’s game show, “Wait, Wait … Don’t Tell Me!” (The true story among the three was — spoiler alert — the patent that, in Abrahams’ words, lets “crewmen of armored tanks package up their biological waste into the shells that they then fire across the battlefield.”)

Acoustics: Kazutaka Kurihara and Koji Tsukada of Japan for creating the SpeechJammer — a machine that disrupts a person’s speech by making them hear their own spoken words at a very slight delay.

Chemistry: Johan Pettersson of Sweden and now Rwanda for solving the puzzle of why, in certain houses in the town of Anderslöv, Sweden, people’s hair turned green.

Medicine: Emmanuel Ben-Soussan and Michel Antonietti of France for advising doctors who perform colonoscopies how to minimize the chance that their patients will explode.

Psychology: Anita Eerland and Rolf Zwaan of The Netherlands and Tulio Guadalupe of Peru, Russia and The Netherlands for their study “Leaning to the Left Makes the Eiffel Tower Seem Smaller.”

There were numerous tributes to the evening’s theme of “The Universe,” including the premiere of a mini-opera called “The Intelligent Designer and the Universe” in which an insane yet wealthy man bequeaths his fortune to have somebody design a beautiful dress for the universe, with advice from astrophysicists. It starred Maria Ferrante, Ben Sears, Roberta Gilbert, Daniel Rosenberg and actual Nobel laureates and prize guest stars Dudley Herschbach (chemistry, 1986), Rich Roberts (physiology or medicine, 1993), Roy Glauber (physics, 2005) and Eric Maskin (economics, 2007) — was later given away in the Win-a-Date-With-a-Nobel-Laureate contest. David Stockton conducted and stage directed the opera.

Still to come: The follow-up event to the awards, The Ig Informal Lectures. These short public talks by the new Ig Nobel Prize winners — usually used to expand on the scientific findings and take questions — are free and open to the public, but seating is limited. They are held at 1 p.m. Sept. 22 in MIT building 10, room 250.