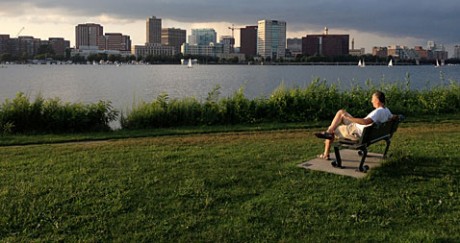 Homeowners are getting off light again and residents are again seeing the benefit of developers’ lust for building in Cambridge, councillors said Monday in approving a proposed property tax rate.

With $9 million coming from the city’s highest-ever free cash fund to keep rates low, three-quarters of the city’s homeowners will pay no more property taxes than the previous year (19.5 percent of homeowners) or see an increase of less than $100 (55.4 percent), even though salary increases and health insurance needs bumped the city’s overall operating budget up by 2.87 percent, to $488.2 million. (The entire document can be read here as a PDF.)

From the councillors’ perspective, much of the credit goes to the city’s crack finance team and the leadership of City Manager Robert W. Healy, who is retiring next year after 31 years.

“Not a bad way to leave your last budget, Mr. Manager, to bring it in at a lower rate than predicted,” said councillor Marjorie Decker, who was leading the budget portion of the meeting as chairwoman of the Finance Committee.

“It’s a factor of many, many things. New construction — as you look at the skyline, you can see cranes. Cranes are good. You see cranes, you see construction jobs and you see buildings being built that will contain additional employment and also provide an increasing tax base for the future,” Healy said, noting that much of the city’s surge in free cash was the result of revenue coming in from building permits and associated fees. (When residents were given a chance to comment on the budget, sole speaker Gerald Bergman suggested that “the crane” should now be known as the official bird of Cambridge.)

In fact, the city’s record-setting free cash of $115.8 million, representing an increase of $13.6 million from a year ago even after paying out $11.9 million in legal costs and settlements, was helped significantly by $13 million in permit revenue, including such things as connection and design review fees, councillor Minka vanBeuzekom noted, while the city managed to spend some $11 million less than budgeted.

The city also saw an extra $2.5 million in sewer revenue and $1.5 million from hotel and motel taxes, $1.3 million in intergovernmental funds and $1 million in unexpected payments in lieu of taxes from nontaxable entities such as churches and on land belonging to the city’s three universities, vanBeuzekom said.

“This is an incredible, stupendous example of the combination of really controlling expenses and at the same time, additional revenue,” she said, prodding the city manager to see if the surprise income might lead to even more tax relief from the city, just as Bergman wondered if there could be aid in the form of a revolving fund for weatherization and other environmentally conscious efforts by homeowners who otherwise couldn’t afford them.

Decker tried repeatedly to cut off vanBeuzekom, finally clarifying that the role of the council Monday was limited: “We can vote up or down on the proposed tax rate, that’s what we can do tonight,” Decker said, although that was done via 14 votes on specific spending proposals from Healy. “All of our colleagues could have a conversation about all the incredible things we could do with this money. This is not that conversation. I’m happy to try to have that meeting some other time if you want to talk about what we could do with it.”

Councillor Ken Reeves also interrupted vanBeuzekom at one point to ask whether she was asking a question or making a commentary. It was a curious spectacle, as Decker and Reeves are the council’s most voluble speakers. Decker’s impassioned monologues go on 10 or even 20 minutes with some frequency, while Reeves is a raconteur who often mixes reminiscences and anecdote into official comments.

Healy also had a general correction to make about dispensing free cash, namely that “It isn’t free. Nothing’s free. It’s an unreserved fund balance or, as the state calls their own, a rainy-day fund. A rainy-day fund’s there for just that: the unforeseen circumstances that may occur in a downturn in the economy or as an unexpected expenditure that’s needed, but generally the rule of thumb is this money is for one-time, nonrecurring expenditures,” Healy said. “We have consistently used $9 million to offset what would otherwise have to be a raise in taxes because that is a number we consider to be reasonable to replenish.”

A separate $2 million is applied to lowering the tax rate from an “overlay surplus/reserves” line item for an $11 million total.

After Healy spoke, councillors dutifully referred to free cash — the term used throughout Cambridge and state documents and referred to in the Cambridge budget book as money left over from the previous fiscal year that is “available for appropriation” — as money from an unreserved fund balance. Playing off that theme, councillors also applauded Healy’s ability to give taxpayers “predictability.”

“Predictability goes a long way, and over the past number of years we’ve been more and more predictable in our tax rate and assessments,” councillor David Maher said, with Fiscal 2013 being the eighth year in a row in which most homeowners get a reduction, no change or an increase of less than $100 in their tax rate. “When we think about veterans and senior citizens and long-term residents, what they are looking for is predictability. They don’t want to open their bills up in late October and get a big surprise.”

“It’s extraordinary when we think about what communities are going through in the commonwealth of Massachusetts and around the country and how different we are from most every other community,” Maher said, noting recent construction and renovation of such buildings  as the Cambridge Main Library and Cambridge Rindge & Latin School.

The city is embarking on rebuilding at three more schools, starting with an $84.5 million project to be done without state aid; the council approved moving $10 million from free cash into the city’s debt stabilization fund to ensure loans are paid back on time and the city’s excellent credit preserved.