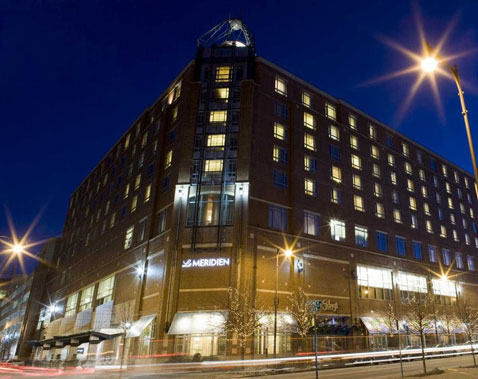 The Le Méridien Hotel at 20 Sidney St. faces a call for boycott from its own workers.

The Le Méridien Hotel faces a boycott call from its own workers amid accusations they “endure crushing workloads” after staff cutbacks and the owners have rejected calls to discuss unionization.

There will be a rally at the 20 Sidney St. hotel at 4:30 p.m. Thursday and a march to City Hall, said Steve Crawford, a publicist for Local 26 of the Unite Here union. Hundreds of people were expected to rally and march. At the end, city councillor Ken Reeves is to have a resolution on hand calling for a city boycott of the hotel that the council will see Monday.

“It’s not easy for workers to say to the public, ‘Don’t do business with the place I work,’” Crawford said Wednesday. “They’ve been working to get fair representation at the hotel for some time, and things are definitely reaching a crescendo.”

Staff went to about 70 workers from 100 since HEI Hotels & Resorts took over management at the hotel in 2007, said Brian Lang, president of Local 26, and Heather Nichols, a front desk worker at the hotel who is taking part in the boycott efforts. HEI, an investment fund that manages properties to ensure the success of its portfolio, has drawn accusations nationwide of unfair treatment of workers, health care costs and hostility toward unions. The HEI Workers Rising website serves as a clearinghouse for those complaints.

Wade Gates, a spokesman for the fund, said Unite Here has been trying to organize workers at various HEI properties for four years, and that “we always said we would welcome an election. They’ve never called one.”

That may be true on a technicality: Lang and Nichols said workers are focused on first finding out whether a majority want to unionize, but that HEI is blocking the process.

“We’re technically not trying to form a union, we’re arguing for rights to a fair process,” Nichols said.

There have also been no cutbacks in staff, Gates said, calling it “more of the union’s efforts” at riling workers. The fund has 5,000 workers nationwide, and HEI gets high scores for job satisfaction, he said.

Nichols paints a different picture, starting with her own experience as a housecleaner starting about a year ago. She often worked 40 hours a week but was paid part-time, she said, before being promoted to working the front desk. Those who carry on as housecleaners can handle up to 30 rooms a day instead of the industry norm of 10, while other staff can be called upon to perform the roles of six or seven workers at a time. “There’s no concierge, no hotel operator,” she said, “no security days or evenings, even at times like New Year’s,” and at any given time there will be either a doorman or bellhop. The cuts in positions extended to the restaurant, she said.

Housekeepers are scheduled to clean 16 rooms per day on a normal basis, or 14 per day on Friday and Saturday, Gates said, but “if they finish their rooms early, they can pick up extra rooms for additional income.” Nichols said housecleaners earn about $12 an hour.

Until late 2007, the hotel was known as Hotel @ MIT — it is in University Park, the area near Central Square created by developer Forest City for the Massachusetts Institute of Technology — but HEI acquired and converted it to the Le Méridien brand, giving it an extensive makeover  that included renovating guest rooms, updating the lobby, “reconcepting” the restaurant space and and converting an existing library into multifunction space, Gates said. The reviews collected by Google are mixed, with the hotel getting an overall 19 out of 30 points.

While visitors appreciated the location and “clean modern decor” with “super comfy [beds] and nice bathrooms,” there were also complaints it had “three-star rooms and two-star service disguised as a four-star hotel.”

Unite Here’s Local 26 also led protest efforts against the Hyatt chain, including the Cambridge site, for its 2009 layoff of housecleaners — some 130 among the three Hyatt properties in Cambridge and Boston — in favor of outsourcing the work for lower pay. Some were allowed to continue cleaning for Hyatt, but through a secondary company, causing their pay to go to about $8 an hour from $15 or $16.

The issue appeared several times before the council, with resolutions and policy orders requesting bans on city business with the Hyatt, investigating ways to dissuade the hotel’s use and even threats against its license, since the city defines what business practices warrant a license to business here.