Permanent home for administrators could go on schools checklist 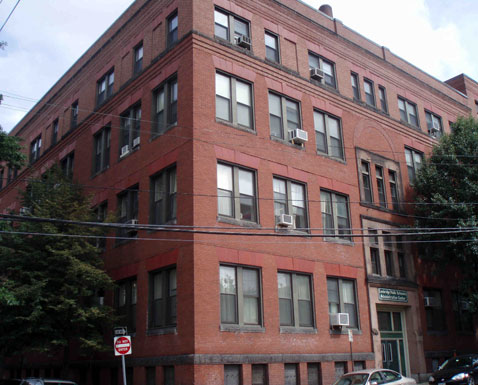 Permanent home for administrators could go on schools checklist

The city has rented 159 Thorndike St. for Cambridge Public Schools offices since at least the mid-1990s. (Photo: Cambridge Assessors Office)

With a policy order from councillor Leland Cheung on the agenda for Monday, the City Council will turn its attention to an issue that has long nagged at the School Committee: administrators working in rented space instead of having their own, permanent offices.

With the city “investing a significant amount of capital in refurbishing several middle schools,” Cheung asks in a policy order directed toward the city manager, why not “look into the feasibility of relocating the school administration into one of the buildings”?

The city has rented 159 Thorndike St. — 39,666 square feet of bricks, tar gravel and oil-powered heat dating back to 1890 — since at least the mid-1990s, paying annually to the Roman Catholic Archbishop of Boston, according to data in the city assessor’s database. The cost is considered small by committee members, part of the $222,065 spent on rent districtwide in the fiscal 2012 adopted budget out of a total projected $140 million.

Yet moving out has been a long-running interest of committee members and administrators, even making it into plans for the 2003 consolidation that shrunk the district to a dozen elementary schools from 15. The move was estimated to save $205,453 annually in rental, utility and custodial costs, or $251,587 in today’s dollars. “It is estimated that the equivalent of 25 classroom spaces would be required for the relocation of administrative and support offices, including storage requirements,” according to the report saved on Robert Winters’ Cambridge Civic Journal.

“Getting out of rental space is a long-held goal, obviously for financial reasons, though we have a very good deal,” said Alice Turkel, a committee member for five terms since 1995. “It’s the face of the school system, but the space isn’t in very good condition and we don’t want to spend a lot of money fixing up something we want to move out of.”

“There’s a lot of reasons to do that,” she said of moving to permanent offices. “But it always gets moved to the bottom of the list.”

It makes sense for Cheung to connect administrative offices and the renovations planned for three city schools, Turkel said Sunday. While the district once had to send students to school in Somerville or other communities during renovations, consolidation has left the district in a better position: the Longfellow School left empty after consolidation can serve as swing space for whatever campus is being reworked. But there are also reasons the renovations and office move might be better left separate:

The council meets at 5:30 p.m. Monday at City Hall, 795 Massachusetts Ave., Central Square. A roundtable/working meeting with the committee is planned for 5:30 p.m. Nov. 26 to get an update on the Innovation Agenda, which brought the upper schools to Cambridge and is changing curriculum to close achievement gaps. No public comment or votes will be taken, and the meeting will not be televised.