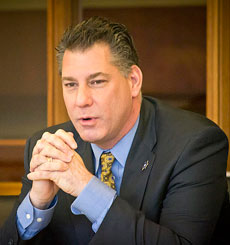 Middlesex County Sheriff Peter Koutoujian says 415 prisoners are to be sent to a Billerica facility from East Cambridge by the end of next year. (Photo: The Rappaport Center)

The final decision on a developer for a defunct East Cambridge courthouse is due “within the next couple of weeks,” said Dana J. Harrell, acting deputy commissioner of real estate for the state’s Division of Capital Management, before adding, “It will be no time later than sometime in December.”

Harrell, speaking Wednesday during a conference call with Scott Jordan, assistant secretary at the Executive Office of Administration and Finance, said the decision was “not delayed. We’re on schedule … there’s still some due diligence to be done. We want to be sure we’ve run an air-tight process.”

The timeline given — of a decision coming on schedule either within the next two weeks or the next six weeks — is similar to that of the removal of Middlesex Jail prisoners from the courthouse’s top four floors. The Cambridge Chronicle, which attended a Monday press conference with Sheriff Peter Koutoujian, reported that the 415 prisoners were to be sent to a Billerica facility by the end of next year, but quoted Jordan as saying “the state had set an ‘ambitious’ schedule that would have inmates transferred to the expanded facilities in early 2014.”

“Our intention is to have … the transfer of prisoners [complete] by Dec. 31, 2013, but exact dates are subject to the construction schedule,” Jordan said Wednesday, referring to the building of two “pods” to hold the Middlesex prisoners until a permanent home can be found closer to Cambridge and Somerville.

“It’s not inconsistent,” Jordan said. “It is our goal to have the prisoners moved by Dec. 31.”

The 22-story, three-basement, asbestos-ridden Edward J. Sullivan Courthouse finished construction in 1974 and held a jail, District Attorney’s Office, and Middlesex Superior and Cambridge District court. With those functions moved, the 595,000 square feet of space on 1.37 acres, zoned to take everything from homes to office space, retail or even a hotel, was announced in November as being for sale. Eight developers filed bids for the site in February, a second round in June attracted seven developers; in August it became three; and Harrell said a recommendation for the winner was made in mid- to late October.

DivcoWest: This company works primarily with tech tenants and plans the same use at the courthouse. It proposes about 400,000 square feet of office space, with the remainder split between retail, community space and amenities. There could be 80 parking space within the building, and DivcoWest touts the long-term lease it has on parking spaces at the city-owned garage across the street as part of its recent purchase of the nearby Davenport building.

HYM Investment Group: Uniquely, HYM plans to take off the building’s top floors, which would leave it with less overall square feet. It plans 50 residential units at the base, offices in the tower, 11,000 square feet of retail and 120 parking spaces. Community space and retail — possibly including a small grocer — would be next to a proposed 15,000 plaza.

Leggat McCall Properties: Leggat McCall wants to build 500,000 square feet of office space using all of the tower and half the base, with the rest of the base being retail and amenity space. Space is reserved on the south side for a park, and a health club and grocery store (but not a supermarket) are being considered. There will be 50 to 100 parking spaces.

Division Commissioner Carole Cornelison makes the final decision, and is doing her due diligence to make sure of her choice, Jordan said. It was important to take steps to avoid a stated fear the building’s neighbors in East Cambridge: that the winning developer will build slowly or not at all, leaving a giant hole in the ground as Boston has seen at the former Filene’s in Downtown Crossing.

When told another state official had said a decision had been hoped for last week, Jordan said, “We don’t want to put out timelines that box us in or rush the process. That’s how you avoid a Filene’s Basement.”

Still, Jordan and Harrell confirmed that after the prisoners are gone and the sale is made, it’s like any property deal: “At that point, we no longer own the real estate,” Harrell said.

A spokesman for Koutoujian referred questions back to Jordan.