With legal marijuana a month away, law firm hosts seminar Thursday in Cambridge 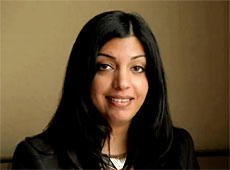 With legal marijuana a month away, law firm hosts seminar Thursday in Cambridge

Shaleen Title is the Cambridge attorney leading a new local branch of the Colorado law firm Vicente Sederberg, which specializes in issues of medical marijuana.

With medical marijuana becoming state law Jan. 1, Colorado law firm Vicente Sederberg has opened a Boston office and is running seminars on how to set up a marijuana-based business or, if you have a debilitating health condition that could be helped by the drug, how to get it.

The first seminar is in Cambridge, from 6 to 8 p.m. Thursday, at Cambridge Community Center at 5 Callender St., near Western Avenue in the Riverside neighborhood.

The state law calls for up to 35 marijuana dispensaries (called “treatment centers”) statewide, with at least one in each county but no more than five. It was voted in Nov. 6 by 63 percent of voters statewide.

Not everyone seems eager to get a dispensary — or five. Quincy city councilor Brian Palmucci had an ordinance drafted seemingly as votes were being counted to ban treatment centers within 1,500 feet of a residential district, school, child care facility or business that serves alcohol, The Patriot Ledger reported. “This isn’t to say: You can’t come to Quincy,” Palmucci told the paper. “This is to say we want to set some community standards.” Boston lawmakers have also expressed concern about having dispensaries near schools or in residential areas.

But the Quincy vote actually lagged the state average, with a little less than 61 percent of people voting on the measure being in favor, while in Cambridge, a little over 73 percent of voters said they wanted medical marijuana. With three meetings remaining before the new year and the implementation of the law, the Cambridge council hasn’t brought the issue forward for debate.

“Millions of Massachusetts residents will potentially be eligible,” Title said on massmedicalmarijuana.com, a site set up by her firm:

“In specific hardship cases, patients will be allowed to grow marijuana for their own use,” Title said.