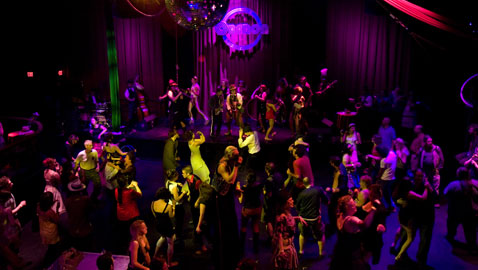 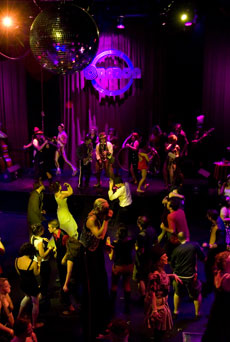 Cambridge scores high in nightlife in a ranking by the website Eventful, which includes venues such as Harvard Square’s Oberon. (Photo:
M.F. Ringel)

Cambridge is in the top three of four “Most Eventful Cities ” categories, according to the entertainment site Eventful — including the No. 1 spot for concertgoers.

The city is No. 2 for campus events, behind Columbia, Mo.; and No. 3 in the “Small but Eventful” category for small cities with plenty going on and, predictably considering the concert category, also No. 3 for having the most nightlife events. (The runner-up is Las Vegas. Who beats Cambridge and Las Vegas for best nightlife, as well as No. 4 San Francisco and No. 5 Atlanta? Burbank, Calif., a hipster haven north of Hollywood that benefits from the presence of Dodger stadium.)

For Cambridge, perhaps the most disappointing ranking in the list is for “Bookworms.” Once known for its bookstores and intellectual life, the city doesn’t appear in the top five for literary events. New Haven, Conn., is at the top, followed by Alexandria, Va.; Columbus, Ohio; Seattle; and Fargo, N.D.

Still, topping the list of vibrant music cities — ahead of Madison, Wis., Nashville, Tenn.; Atlanta; and as surprisingly low-ranked Austin, Texas — is a pleasing validation for a city that packs dozens of venues to a mere 6.4 square miles and has still more performance space coming. Harvard Square’s The Sinclair has yet to host an actual show, and restaurateur Jack Bardy is still working on his 100-plus seat offering at 11a Brattle St., telling The Harvard Crimson in October that he’s thinking up a name other than “Liberal Servings”; on Monday the City Council took a step toward easing the opening of the Prospect Lounge (the bigger, better All Asia, for when the All Asia is torn down to make way for biotech lab and office space) in Central Square.

“We’re proud to be a city of many entertaining delights. People from all over the world come to our concerts, lectures and performances,” Mayor Henrietta Davis said via an Eventful press release. “Those lucky enough to live here always have something fun and stimulating to do.”

In terms of campus events, Cambridge has lucked out by having three universities willing to invite residents in. The Massachusetts Institute of Technology has the most varied and interesting events and the easiest calendar to navigate; Harvard’s calendar is harder to parse, especially when trying to separate college-only events from those open to the public, but has an eyebrow-raising ability to filter events by whether free food will be offered; Lesley University’s events are far rarer and its calendar interface is, like Harvard’s, a bit awkward to sort through.

There are 27 categories searchable on Eventful, from “Kids & Family” to “Galleries” and “Festivals.” The methodology for the Most Eventful Cities Ranking is based on the total number of events per capita listed for each city, Graham said. It can provide some surprising results, such as Burbank topping the list of cities lively at night.

“Analyzing event data provides an interesting window into the personality of a city and its residents. You can see how people spend their time, discretionary income and interact within their community,” said Jordan Glazier, chief executive of Eventful.