Why all the white at a Coup show? Boots Riley has a hip-hop history answer 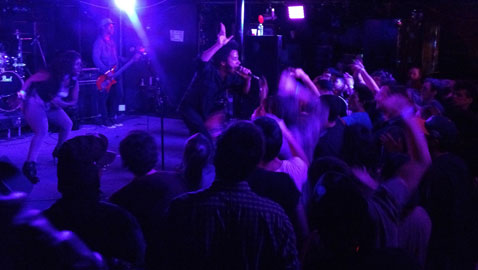 Why all the white at a Coup show? Boots Riley has a hip-hop history answer

The Coup performed a powerfully fun set at The Middle East Downstairs on Wednesday to an oddly not very diverse crowd — meaning that in a room that holds 595 people and was moderately crowded for midnight on a weekday, the half-dozen black faces onstage might have outnumbered those in the audience.

The Coup is a funny, politically informed and creatively and constructively angry hip-hop band making great albums and putting on relentlessly entertaining live shows since 1990. Especially as a band with an empowering message that has plenty to do with race, it could be expected to draw a more heterogeneous room.

Yet the audience mix suggested middle-class, largely college-age whites are somehow more into seeing performances of songs such as “5 Million Ways to Kill a CEO” and “The Guillotine” — which is from the latest Coup album “Sorry to Bother You” bearing the lyrics “We got your war / We’re at your door … We got the guillotine, you better run” and comes accompanied by a four-page, Occupy-inspired tract that starts:

This is the time to build a mass movement that can eventually evolve into a revolutionary movement that will get rid of capitalism … The left in the U.S., since at least the ‘50s, has been plagued with the disease of breaking into smaller and smaller, more politically correct  groups. This hasn’t helped build a mass movement, and it hasn’t helped build a revolution.

After the show I asked The Coup’s mastermind, Boots Riley, why all the whiteness. He explained at length that he saw it as a decades-long phenomenon stemming from the fact that when hip-hop got big back in the 1990s, the shows — giant gatherings of raucous black people — made some people nervous. Concerts got shut down, or performers were made to hire one off-duty police officer per every 50 people for $50 an hour, cutting profits. The promotors’ solution? Starting in about 1998, Riley said, it was to hand out fliers in white communities and get white kids to come to the shows.

“You see a line of white kids waiting to get in, that show’s not going to get busted,” Riley said.

Hearing that at least part of the reason dates back decades and is nationwide is moderately more comforting than being told it stands out as an issue for Cambridge or even Greater Boston.

But not much, and it would still be nice if it were otherwise. At the very least, because this was one great show.

“Sorry to Bother You,” available on iTunes and Amazon as well as in stores, is described as the soundtrack to a dark comedy movie based on Riley’s experiences as a telemarketer — and it’s hardly a traditional hip-hop album, as suggested by The Coup’s full touring complement of bass, drums, guitar and keyboards and the albums full, crazy spectrum of styles. The A.V. Club gives the album an A-plus and calls it “funny, cinematic, and sweeping … a bold provocation, a statement, a riot, and a hell of a party to boot”; Pitchfork gives it a 7.2 and says Riley “has raged longer and harder than most, but somehow … sounds as nimble, funny and wry as ever”; Popmatters gives it a 7 and calls several of the songs “impossible to forget and easy to love.”