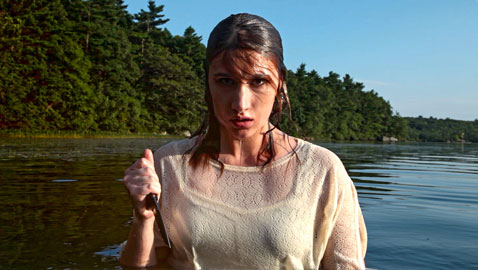 Some things about being a low-budget filmmaker haven’t changed, and in making  has used traditional dollar-stretching techniques such as hiring student actors and clothing them in costumes from The Garment District.

What’s new is Kickstarter, the crowd-sourced funding website, and Matuson’s project is on it – seeking $3,675 with less than three days to go.

Matuson is seeking $5,000, and the project doesn’t get any money if the full amount isn’t reached. “The film and video isn’t color-corrected yet, let alone edited, and has to undergo cutting, coloring and extensive sound work,” she said. “We filmed in an area heavily populated by airplanes, it seems.”

The 20- to 30-minute experimental, psychological thriller focuses on a couple living in the woods. Their relationship is deteriorating, and “the two bait each other, constantly playing mind games,” explained Matuson, a Massachusetts College of Art and Design senior who wrote, directed and is producing the film. The girl starts eventually to wonder “if her own reflection has escaped into reality,” she said.

Matuson is no stranger to Cambridge’s creative scene, including screening work at the Beat Research residency at the (former) Enormous Room and at the Wildlife Preserve Summer Film Series at Lyndell’s Bakery in Central Square.

And Cambridge and Somerville may be in the giving mood for creative horror flicks. “Ten,” a project by Michael J. Epstein and Sophia Cacciola, got $12,001 in funding in September – and only $11,000 was needed.

The Kickstarter page for “My Big Bad Wolf” is here.

Update: With 45 minutes to go on the Kickstarter campaign, the film was funded – to $50 over the $5,500 that was asked, Matuson said. There were 107 backers, with most in the $10 range that got a special backer credit “thank you” in the final film.