King mural will be preserved at school, mayor says, but new art policies are needed 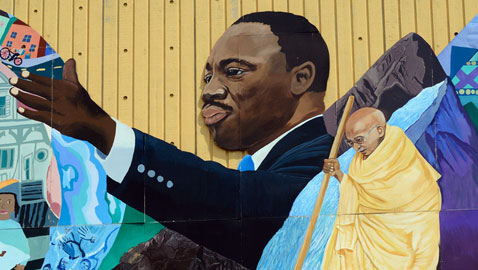 King mural will be preserved at school, mayor says, but new art policies are needed

An architect’s rendering of the combined public school campus to be built on Putnam Avenue – so far without the addition of the current school’s Dr. Martin Luther King Jr. mural. 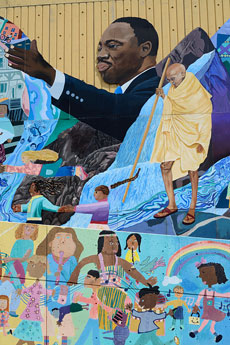 A detail of the mural, which parents, officials and educators are asking be preserved for the new school. (Photo: Rosino)

The long-term plan to tear down and remake three public schools has caused worry over what happens with the art inside and around them, with the fate of the “Further the Dream” mural at the 100 Putnam Ave. Dr. Martin Luther King Jr. School being – literally – the biggest concern.

The mural, designed and painted by students, teachers, families and residents under the direction of artists David Fichter and Kelley Mowers, is more than 100 feet long and up to 35 feet high, including a point where it curves and rises above an entranceway, making for a total of 77 wood panels that have been exposed to the elements since it was finished in 2000 and are already seeing some decay.

But the will of residents, city councillors and school officials is clear: They want the mural saved from destruction and brought to the new building, and Mayor Henrietta Davis delivered some comforting words to that effect Monday.

First, though, there are problems to address, district Chief Operating Officer James Maloney has said.

“Murals are designed for existing buildings, and when renovations come along, sometimes it works, sometimes it doesn’t,” Maloney told the School Committee’s Building & Grounds Subcommittee at a Jan. 8 meeting, pointing out that preliminary designs for the new Putnam Avenue campus – one that will be split into separate facilities for K-5 students and others in their middle-school years – call for plenty of glass and natural light on what Maloney called “a very tight piece of land.”

“The bottom line is, and I don’t mean to sound disparaging, we can’t design an $80 million building around a piece of artwork,” he said.

Still, there have been votes by the City Council and committee – on Monday and Tuesday, respectively – to look at preserving and protecting the artwork created for the city’s schools. The committee’s goes further, asking for a policy that looks ahead and addresses how (and how permanently) art should be installed in a school.

Some art captures the spirit of a school, while some just reflects the work of a class, committee member Alice Turkel said. Some is meant to last forever, some just for a year.

And then there is the art that just shows up, becoming seemingly permanent fixtures on a campus with no warning or known origin.

“We don’t have any kind of policy,” Turkel said. “To my mind, for anything that could be considered permanent, one would have to apply and a decision would be made whether you can do it or not. And that gives a way to look at things like the materials used and whether it can come down or not come down.”

The council and committee orders, approved unanimously, bring together top school and city officials – as well as members of the arts community and other stakeholders – to preserve existing art and set policy for future installations. Committee member Richard Harding was concerned about who got final say over the fate of the King mural and other school artworks, but committee members including the mayor talked Tuesday about a combined approach because it bring insight about school renovations, which in large part are a concern of the city government paying for them, and because it introduces the expertise of the Cambridge Arts Council.

“The city builds the building and funds a significant piece of artwork in each building, so the city has a role to play. The city is responsible for the Percent for Art project” and works such as the Vusumuzi Maduna sculpture installed at the school in 1971, Mayor Henrietta Davis said. Its dismantling for when the school is rebuilt is therefore taken care of with anywhere from $43,000 to $50,000 – both figures were mentioned Tuesday – set aside by the city.

“We don’t have leverage or any kind of purview over the Arts Council from the school department, but we really need their help,” Davis said.

An e-mail from Deputy City Manager Richard C. Rossi, read by Davis, said what ultimately happened to the mural was “an open question” but that it was to be taken down and stored during demolition and construction over the next two to three years. Nothing would happen without input from the school community and neighborhood, and “there will not be any surprises.”

On Monday, Maloney, Fichter and others met and agreed the artist would talk with the architects and principals for the new King School and discuss integrating the mural into the building.

“And it’s not whether or not it will be, but how it will be,” Davis said.

Turkel had a fallback suggestion if there’s difficulty finding a place to install it: The mural could become part of the flooring.