Turns out ‘Who Cares if Classical Music Dies?’ is lovers of civilization, democracy 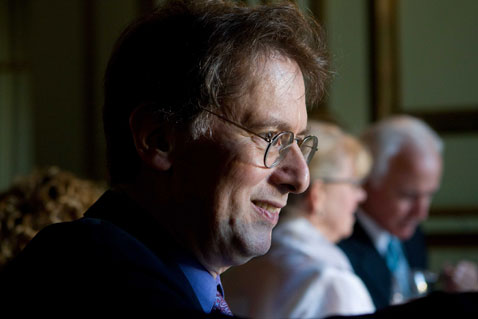 Turns out ‘Who Cares if Classical Music Dies?’ is lovers of civilization, democracy

The second-to-last of the year’s Mount Auburn Hospital Auxiliary Thursday Morning Talks, “Who Cares if Classical Music Dies?” on Feb. 21 packs a surprising wallop leading to the conclusion that we all should.

Robert Levin, a composer, musicologist, music professor at Harvard and adviser to The Boston Musical Intelligencer, has been giving the talk since 2002, but  it’s doubtful his message is commonly known: If classical music goes, so does democracy.

“The music that the framers of the Constitution were listening to, and they were listening to music, was the kind of music we are talking about,” Levin told Intelligence founder Lee Eiseman in 2008. “I wonder what you think is going to happen when you attempt – or when this country attempts – to divorce its notions of polity from the cultural liberal traditions from which they sprang?”

There’s a clue in the popularity of classical music at Harvard despite it having no music majors, Levin said. The connection between classical music, intelligence and leadership lies in how the structure of the music teaches people to think and enhances “your ability to cope with the challenges of everyday life,” and Levin said the decay in morality that led to the Great Recession of the time can also laid at the feet of music’s removal from education.

You play in an orchestra, and you play this kind of music that is not simple pop music that ends in three minutes 25 seconds, but requires that people pay attention to a narrative and really understand what both order and disorder mean, what destiny means, all of these things, This is something that will turn adolescents into people who function in society in a more responsible and enlightened way.

(A good follow-up question for someone attending: Why is the country, Wall Street and the world so screwed up if so many of its leaders came up through classics-loving Harvard?)

The final talk in this 77th year of the series comes Feb. 28 featuring Allen Grossman, a professor of management practice at Harvard University, on “Urban Education in America: How Do We Make it Work?”