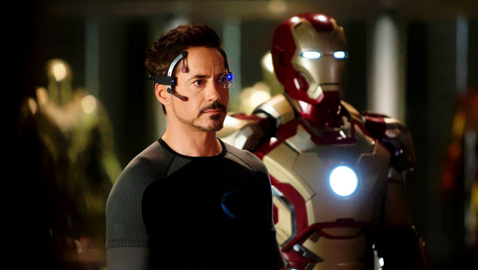 Fans of Iron Man born after 1980 might not be familiar with the name Shane Black. They may recognize him as one of Arnold’s soldiers in tow in “Predator,” but probably didn’t know he was one of the highest-paid screenwriters in Hollywood (along with Joe Eszterhas) in the late ’80s and early ’90s, churning out the “Lethal Weapon” series and “The Long Kiss Goodnight.” He also directed one film – starring Iron Man himself, Robert Downey Jr. – called “Kiss Kiss Bang Bang.” There must be something about all those kisses and RD Jr., because Black, after a stint in hibernation, is back behind the camera and pen for the latest installment of the marquee Marvel movie franchise. 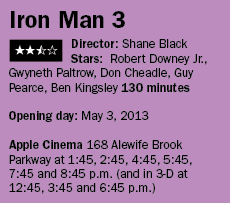 Strange pairings seem to be a part of “Iron Man” history. Start with the casting of RD Jr. I always thought of him as the guy who made small, edgy, near-indie films. Who knew he could don a cape (or metal suit)? Then there’s Jon Favreau, an actor in “Swingers” who has a minor recurring role in the series. He directed the first two “Iron Man” chapters, yet cedes the task to Black here.

Superfluous meanderings aside, “Iron Man 3” finds itself somewhat hampered by the same challenges that slowed “Iron Man 2”: the mandate to feed back into the stream of ongoing Marvel moneymakers “Thor,” “Captain America” and the bigger, eventual payday of another “Avengers” film. As a result the plot threads are simultaneously enriched and convoluted. Black and co-writer Drew Pearce do an effective job despite that obligation, though Downey’s Tony Stark suffering from PTSD from “The Avengers” blowout battering aliens and gods is an unnecessary yoke and doesn’t ring true.

IM3 opens with élan and kitsch at a Y2K eve bash in Switzerland with Stark, then an egomaniacal douche, trying to get into the pants of a comely scientist while being accosted by a bucktoothed nerd who wants Stark to invest in his research. Jump forward 13 years and there’s a madman in the vein of bin Laden called the Mandarin (Ben Kingsley) launching random bomb attacks in the U.S. Stark now has a battalion of Iron Man suits and wants to get in the game, but old pal Col. James Rhodes (Don Cheadle) tells him this is U.S. biz, not superhero biz. Kind of funny since Rhodes also dons a metal suit called War Weapon – renamed Iron Patriot because it tested better – and seems to need all the help possible to reel in the Mandarin.

Oh yeah, that nerd shows up, now a buff, well-groomed super scientist named Aldrich Killian (Guy Pearce) who still wants Stark to help fund his DNA recoding research, and there’s some link between him and the Mandarin and a rogue militia of super soldiers who glow red-hot and can handle most forms of physical harm as if it’s bee stings. That cute other scientist from many New Year’s Eves ago (Rebecca Hall) makes her way in from left field as well. The one-night stand in Bern doesn’t sit well with Stark’s steady, Pepper Potts (Gwyneth Paltrow, who gets to flash toned abs and don a robo jog bra).

As much as the Iron Man series has used Downey’s above-the-mark thespian skills to hone a deeper inner story, it all comes down to a big special FX-fueled slugfest in the end (the “bang bang” of the “kiss kiss, bang, bang” critic Pauline Kael was so fervent about). If you’re a fan of that sort of thing, you’ll be thrilled. If not, you’re likely to be disappointed by the final succession of twists, though the plot evolution involving the Mandarin and the relish Kingsley brings to the role does pay off, as do many of the barbed one-liners and the relationship Stark forms with a young fatherless boy in Tennessee (Ty Simpkins).

With so many people in so many suits (and so many big names in such small roles), the series has clearly hit the point of excess. The only way it seems to add a thrill is to have Stark out and about and suitless while battling supervillains (can you see the film screaming vulnerability?). The end raises questions as to what is next for Stark, Downey and the series. A healthy box office draw will answer that fast. IM3 is sure to sate its fan base, but it won’t endear a new crowd.