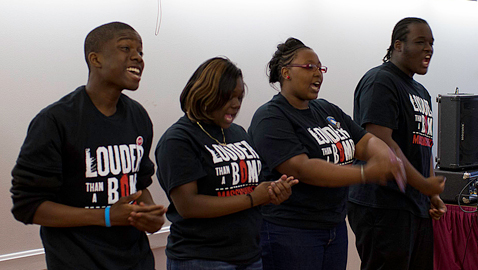 The Louder than a Bomb youth poetry slam festival arrives in late May with funding needs – and a newly poignant name.

The more than 200 youth participants, leaders and mentors expected for the free workshops, presentations and poetry slams go through preliminaries and semifinals at the Massachusetts College of Art and Design the weekend of May 18-19 – a month after the culmination of the violence that started with two bombs going off near the finish line of the Boston Marathon – and hold the final slam May 23 at the Boston University Theater.

“We thought a lot about that,” said Amanda Torres, an organizer for the event who suggested the violence helped renew resolve about what the festival is about. “We really do believe these young voices are louder than any physical or emotional violence being waged.”

“You hear ‘Boston Strong,’ but the entire state banded together,” Torres said of the response to the bombings and the resulting deaths and injuries, shootout and manhunt. “LTAB is a chance for people to come together across segregated, divided communities.”

For the festival, a key to this is Saturday’s mandatory “Crossing the Street” event, in which the 150 to 200 students from 24 area teams get time alone as people and friends before they have to compete the next weekend in public as poets.

Torres said Massachusetts is one of seven states who have adopted the LTAB moniker – founded out of the group Young Chicago Authors, of which she was a member, after another notorious burst of violence that tested the country and its poets: the terrorist attacks of Sept. 11, 2001. (The name comes from a Public Enemy song.)

But at a time young poets will feel the need to express themselves, a lag in funding threatens the organization’s ability to get as many involved as possible.

An Indiegogo crowdfunding campaign to pay for the $10,000 festival has eight days left and far to go: By Wednesday afternoon it had raised $2,250, or less than a quarter of the amount needed, from 22 funders. While a $1,000 benefactor was among them, most donations were at the $50 or $100 level or less – poets and their benefactors not usually being known for their riches.

Donators using the Indiegogo platform get perks ranging from a festival sticker at the $25 level or T-shirt at $50 up to a full, catered house party with poets as entertainment at $5,000 and up. (Indiegogo takes 4 percent of the money when a campaign reaches its funding goal, 9 percent if the campaign falls short.)

After taking a crowdfunding approach twice, the organization is going to move on to other strategies next year, Torres said. In the meantime, though, bringing in less than the $10,000 will mean everything from fewer T-shirts for participants to less ability to cover registration and admission fees for poets who can’t afford the costs on their own.

“We’ll have to pull in a couple of favors and find other funding resources in the last few hours,” Torres said.

The festival is likely to have some 1,500 participants in all, including the 900 expected to attend the May 23 final event. It represents dramatic growth from last year, which had 16 teams competing compared with this year’s 24, Torres said. Many of those teams are pushing the upper limits of six members and two alternates, and that raises the number needing financial help to take part.

“We say often that our most important resources are our people, because our people want it to happen and donate their time, talent and energy to make it happen,” she said. “It’s why we consider this more of a movement.”

Still, she said of people donating even small amounts to the Indiegogo campaign, “Everything helps.”