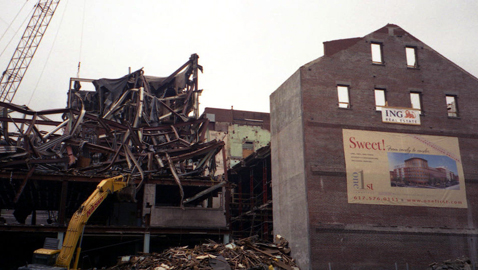 A candy factory is torn down in 2005 to make way for One First, a building of luxury condos and apartments. (Photo: Koranteng Ofosu-Amaah)

Let’s think of them as “misguided.”

If the assertions of our city councillors, planners and administrators and even the Central Square Advisory Committee are to be believed – and I’d love to be able to believe them – all these august civic entities and players are acting exactly opposite to their stated intentions.

I’m talking about their oft-stated intention to help preserve and protect Cambridge’s diversity, our unique blending of diverse populations – the affluent and the poor; families, students and singles; all manner of races, ethnicities and age groups – that creates a rich tapestry of community influences and textures.

Why do I accuse these well-intentioned parties guilty of being misguided?

Truth is, they’ve been unwitting, yet highly willing, accomplices to Cambridge’s homegrown form of gentrification. I call it “sugar-coated gentrification” because the sugar-coating of a small percentage of inclusionary-zoning units, sprinkled very lightly over each development, has become the going price developers pay to build housing for highly paid executives, engineers and technicians – the same executives, engineers and technicians who will easily outbid middle-class families and poor people for the city’s available housing stock.

Who are the councillors, planners and administrators kidding, if not themselves? This small set-aside of units, usually 11.5 percent, will never come close to offsetting the loss of middle-class families and economically disadvantaged residents. We can argue reasonably about the value of inclusionary zoning, but there’s no arguing away the impact of gentrification. We all know the story; we’ve seen it in dozens of cities and hundreds of neighborhoods.

We’ve seen a flood of market-rate housing exert upward pressure on the price of housing, resulting in a citywide purging of the least-advantaged and most vulnerable members of our community, so we should be able to see the danger inherent when inclusionary housing serves as a gateway to massive development and upzoning giveaways.

The City Council is considering that 11.5 percent may not be enough to meaningfully affect the city’s loss of affordable housing. The council got away with demanding 18 percent from the Massachusetts Institute of Technology for that nonprofit’s massive zoning giveaway. So naturally they’re considering raising the percentage to 18 percentage, as if that number were the answer to their vague feelings of concern and insufficiency in this matter.

In its clumsy, accidental way, the council has aimed the light in the right direction. It’s shown the question isn’t whether gentrification will have a negative impact, but how negative will it be. Or, as the council seems to be asking, “What percentage of inclusionary units will make up for all the Cambridge residents ultimately forced out by gentrification?”

Nobody voted for the councillors so they could represent the interests of future Cambridge residents against those of current residents.

Nor does anyone want the council to focus on the well-being of developers and real estate firms at the expense of those same vulnerable residents.

Speaking of misguided focus, nobody pays the city manager or his deputies to foster zoning changes that would alter, perhaps harm, the character and rhythm of vibrant yet vulnerable neighborhoods.

If you believe what everyone repeatedly says, nobody in our city wants to force out current residents to make room for future residents.

If we want to create more affordable housing – and I mean housing less than the $2,400 a month deemed affordable for a single bedroom in University Park – we should build it ourselves. Yes, even with all the discouraging funding news coming out of Washington.

We should take that $14 million bribe paid by MIT and whatever we’ve socked away in the affordable housing trust and put it to good use building real, honest affordable housing. There are any number of ways we could fund such housing, if we chose to do it on a small scale. Twenty units here, 20 units there; something like that. There’s no need to bring in 16- or 18-story towers to achieve the same results.

It’s time we stopped sugar-coating what are basically acts of self-destructive gentrification.

It’s time we realized inclusionary housing isn’t a solution, but a Trojan horse by which developers will undermine the foundation of our community.

It’s also time the council called for a master plan for all of us in Cambridge to review and discuss – a plan that takes into account all the impact from 18 million-plus square feet of anticipated development over the next 20 years. A plan that maps out how we’ll approach city traffic, which will become even worse and more gridlocked with the addition of 50,000-plus car trips a day on our city’s roadways.

A plan that maps out the city’s future.

Better yet, a plan that gives the city a future.